The warmest day of the cruise…not a cloud in the sky.  The only clouds are those covering the tops of the volcanoes on the islands.  Why is that?

Local Information. Maui – the second largest of the Hawaiian Islands - was formed by two massive volcanoes separated by a huge valley.  Maui is known as the “Valley Isle”.  The worlds largest inactive volcano – Haleakala – stands 10,032 ft above sea level. 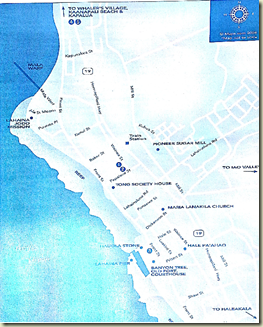 Maui is a tender port and we are not on an excursion today so we get our tender tickets in the Michelangelo Dining Room.  The wait is very short and soon we are on our way to the tiny town of Lahaina, Maui. 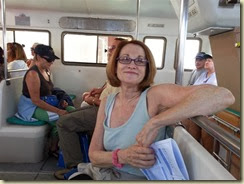 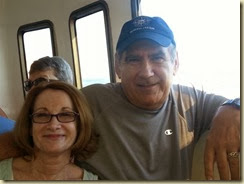 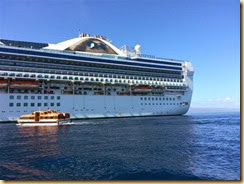 On our way to Lahaina 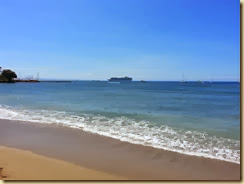 Three other Hawaiian islands can be seen from Lahaina. 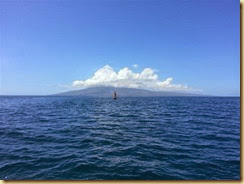 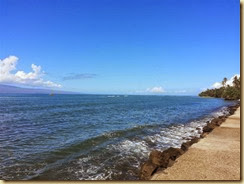 Molokai (way in the distance) 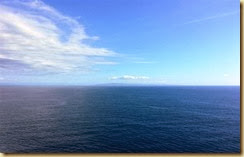 Lahaina is an interesting little town.  It is a mixture of nice restaurants, tourist restaurants, fancy art galleries (really fancy and pricey), and tourist shops.  One of the galleries was featuring art from the “Three Tony’s” – Tony Curtis, Tony Hopkins, and Tony Quinn.  The artworks by the Tony’s was top notch but sometimes odd.  The town is only a few blocks long and even fewer blocks wide. 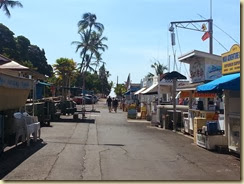 While Ellen was shopping, I tried to get a picture of the hillsides just beyond the town.  Even though I ventured a block or two away from the main street, I still couldn’t get a clear shot.

One of the restaurants, the Pioneer Grill, had a sailor with a lei.  Couldn’t pass up a picture with the old salt. 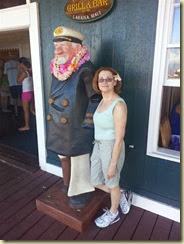 Ellen at the Pioneer Grill

Another restaurant was straight out of “Forrest Gump” 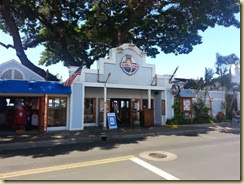 Near the edge of town, there was a public park, complete with green space, cannons, and the ever present, banyan trees. 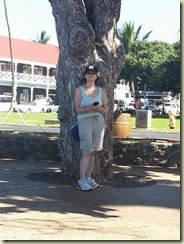 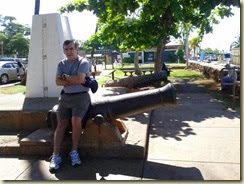 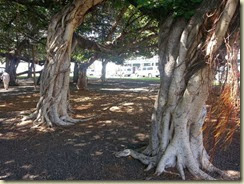 Another park with Banyan Trees 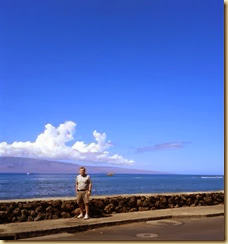 On the way back to the ship, we got a good look at the surfers and why they come to Lahaina. 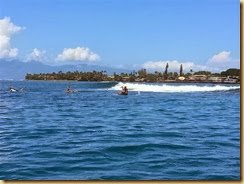 Before docking, a great view of Grand Princess and Lanai. 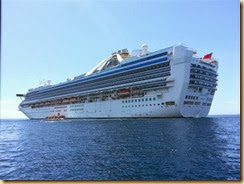 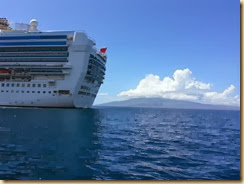 Once back on the ship, we could get great views of Maui. 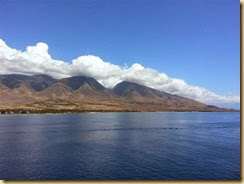 Showtime tonight featured Bobby Brooks Wilson, Vocalist and “Lost Son” of icon, Jackie Wilson.  Ironically, Bobby found out he was Jackie’s son by comparing his DNA to one of Jackie’s known sons.  He put on a nice performance and it was clear that he closely resembled his father – not only physically but musically.  He was all decked out – sharkskin suit and bouffant hairdo (which I found out later was a great wig – it also helped him become unrecognizable on ship). 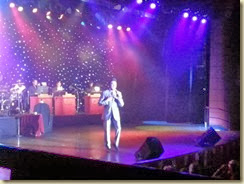