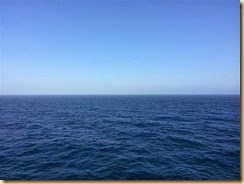 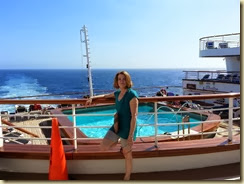 The sea was a bit choppy last night but I did get some sleep.  Up early and off to the buffet in the Horizon Court on Deck 14.  Oatmeal, a pancake,and an egg comprised the breakfast.  If you get there early, it appears that the buffet is not overly crowded and even more important, the piped music is either off or very quiet.

I attended the port talk on Nawiliwili so I could get some idea what there was to do on this Kauai stop should we not get an excursion.

Lunch was at the grill area on Deck 14 – pizza (very good) and a veggie burger (unusual – potatoes with other veggies made into a patty and fried – it didn’t hold together well but it tasted good).

My first talk - “CSI Phenomenon” is at 1:15 PM in the Princess Theater.  I followed the Naturalist – Gary- who had a good crowd (expected on a Hawaiian cruise).  My attendance was pretty good for a first talk.  Based on an estimated capacity of 700 for the theater, I guesstimated the attendance at 200 plus.  The AV was great – the mic was comfortable and right at volume and the screen had near HD level quality – the best I have every seen in a theater setting.  I got some nice positive feedback from people leaving the talk.  Hoping for legs.

We found the best place to hang out and read – Deck 15 Aft Starboard – near the adult pool area – comfortable couches - no piped in music – just open air and quiet.  Wonderful.  It is non-smoking but smoke does waft over from the other side depending on the winds.

We made reservations for 5:15 PM in the Michelangelo Dining Room and got a nice table.  The food again was good (I tried the snapper and we shared the Fettuccini Alfredo).

There are two shows on the schedule tonight.  We caught the early show featuring Michael Wilson in the Vista Lounge.  He did some standup and vocal impressions, most of which were dead-on.

We then spent about two hours reading before we went to see John Bressler in the Princess Theater at 9:45 PM. 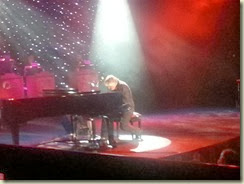 John is an “aging” rocker who plays a terrific piano and intersperses some comedy between songs.  He sounds just like Rod Stewart when he sings but it works for him.  His show was well received by the crowd and it was his first ever Princess Cruise.

The clocks go back an hour tonight.

Beautiful day on the Pacific Ocean 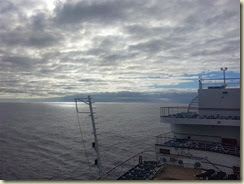 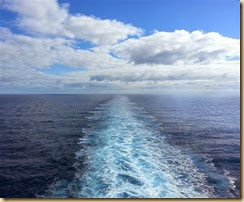 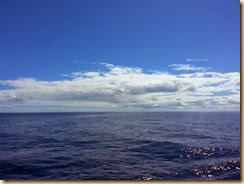 Ellen and I had breakfast together in the Horizon Court.  I reverted to my standard breakfast – waffle, cottage cheese, sour cream, and jellies plus the all important biscuit.

My second talk - “Landmark Cases” – was scheduled at 12:15 PM in the Princess Theater.  The audience was just about the same as yesterday  - not bad considering the lunch hour timing.

The ship put together a special complimentary “Pub Lunch” in the Crown Grill specialty restaurant – we had the fish and chips – pretty good.  Still hungry so I asked for additional fish (and got more fish and chips).

After lunch, we were back to our little haven. 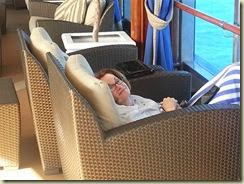 Our new quiet spot on the ship

We made reservations and got a nice table for two in the Michelangelo Dining Room.  I had the seared “Ono” and the Fettuccini Alfredo.

Showtime tonight was very crowded with entertainment – We went to the Production Show - “Stardust” – in the Princess Theater at 7:30 PM.  The show featured six vocalists and nine dancers doing their thing on a very small stage.  Everyone was good and the volume was set at a pleasant level.  A very nice show but one of the shortest we have ever seen – just under 30 minutes from start to finish. 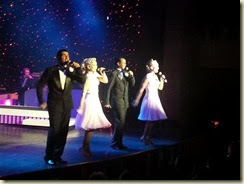 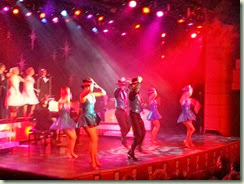 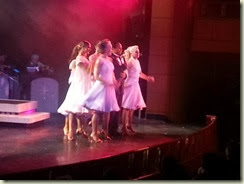 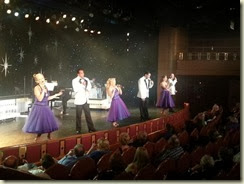 From there, we immediately headed for the Vista Lounge to catch Kevin Hughes doing his full length show.  Couldn’t get a shot of Kevin – he doesn’t stand still very long – but I did get a picture of Frenchie introducing him. 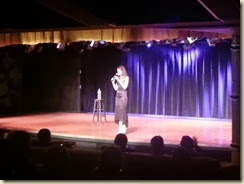 Another clock change (back) tonight.

The temperatures continue to rise as we get closer to Hawaii 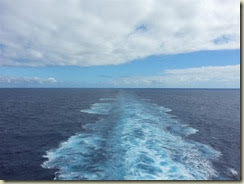 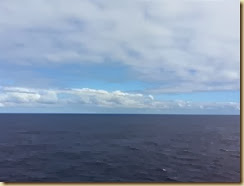 We spent the morning in our quiet zone on Deck 15 aft.  Did some polishing of my talk for today.

1:00 PM – Princess Theater - “Cold Cases Solved” – maybe 300 plus (up from yesterday).  I met a passenger who worked as a lab technician at Soledad Prison during 90s and took the blood sample from David Paul Frediani when we was released.  The passenger said he was a witness at Frediani’s trial and verified that he did indeed take the blood samples from the defendant.  How cool is that?

We needed to get up and move a bit so we walked a mile (three laps) on the Promenade Deck.  No wind, warm – perfect for walking (faster on the smoking side). 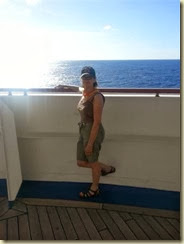 Halfway through our Mile Walk

We spent a lot of the afternoon in the Piazza and were there when the Milk and Cookies Girls did their rounds.  Who can resist freshly baked chocolate chip cookies? 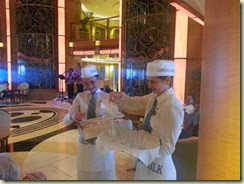 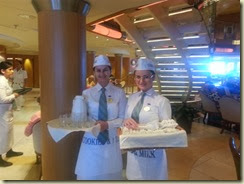 We checked the dinner menu in the Dining Rooms and decide instead to eat in the Horizon Court – all kinds of good offerings (I liked the breaded broccoli and ranch dressing, spinach tart, salmon (no skin) and corn on the cob).  A quiet and relaxing dinner.

After dinner, I shot my first sunset of the cruise and it was a terrific one. 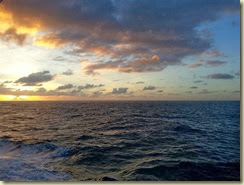 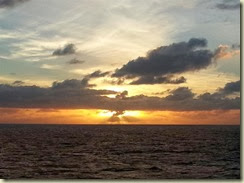 Another busy night of entertainment…

First we went to the Vista Lounge to see Michael Wilson (comedian – impressionist).  He was an absolute hoot.  One of the funniest guys on the sea.

When that show ended we literally ran to the Princess Theater to see David Klinkenberg and John Bressler.  The place was full so we stood and listened to David and part of John’s show. 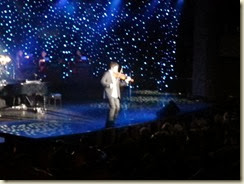 Still tired so we went back to the room.

The seas are super smooth.

Another clock change tonight – the third and final one for the outbound portion of the cruise. 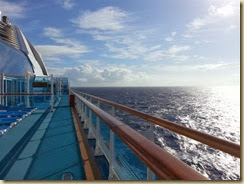 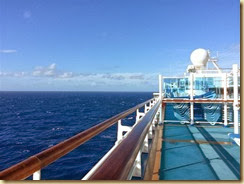 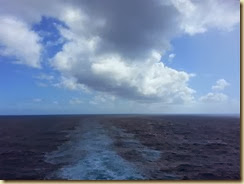 Although we have done this before, the clock changes are proving problematic – this morning I was up at 3:08 AM – I might have gotten a little more sleep but I was in the Horizon Court when it opened at 6 AM (and I wasn’t alone).

Back to the standard fare today for breakfast – Waffle / Cottage Cheese / Sour Cream / jams / grapefruit half / mango French toast / biscuit.  I spent an hour eating and reading Pop Science (both in the Horizon Court and in the Solarium).  Went with Ellen to the Da Vinci Dining room for breakfast.

Spent the morning on Deck 15 Aft going through the talk for today and working on a extra ninth talk on the “Lost Dauphin”.

Today is another Pub Lunch day but we again did a progressive meal – starting with Greek Salad and Tuna Paninis at the International Café in the Piazza and finishing up at Horizon Court - fish and chips (wonderful) and more Greek Salad.

We went to hear Kevin Hughes talk on “The Brain” in the Princess Theater at 12:30 PM.  Interesting take on keeping your mental faculties in tip top shape.

I followed Kevin at 1:30 PM with talk 4 - “Mystery of the Romanovs”.  The attendance again was 300 plus and very few people left early.  Finished on time so people could see “Iron Man 3”.

Ellen attend a “Lei Making Class” at 3:30 PM and came away with a very nice lei in Hawaiian colors. 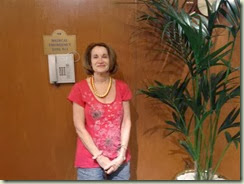 Proud of my Lei

Spent the rest of the afternoon catching up on this blog and reading on Deck 15 – very warm today.

The Hawaiian Couple – Lokelina and Kimo – 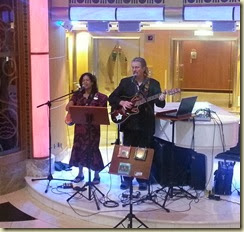 perform in the Piazza just about every night – they are great to listen to.

I finally finished “The Girl Who Kicked the Hornet’s Nest”.  Stieg Larsson wrapped it all up nicely at the end.  I started “Lab Notes” a free Kindle Book written by Gerrie Nelson.  It’s a scientific mystery.  We shall see.

Kevin Hughes is on again as the headliner in the Princess Theater.  He is still funny.

Tomorrow, we are in Kauai.