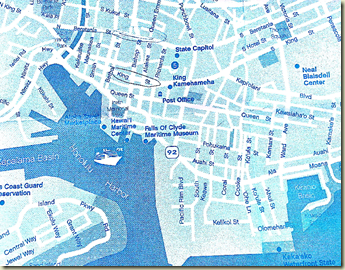 Local Information. King Kamehameha united Hawaii in 1795.  Honolulu has a population of 905,000 people or about 90 percent of the total population of the Hawaiian Islands. Diamond Head contains calcite crystals that sparkle like diamonds causing Brit sailors to name the volcano Diamond Head.

Iolani Palace was built in 1882 by King Kalakaua (today, it is the only Royal Palace in the United States).  Captain James Cook, British Explorer, arrived here in 1778.  In 1794, British Captain William Brown sailed into Honolulu’s Harbor – he called it “Fare Haven” or “Honolulu” in Hawaiian.

We are not on tour today.  The Grand Princess is docked at Pier 5 right next to the Aloha Tower. 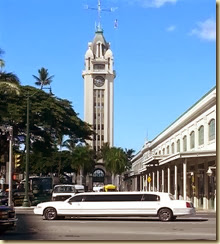 The pier is just across the street from the city of Honolulu.  Before the building regulations were changed, Aloha Tower was the tallest structure in Honolulu.  Now skyscrapers dot the city’s skyline. The business district is one skyscraper after another.  The city is very clean, as well.

We first walked to nearby Chinatown to see the shops and markets of the area. 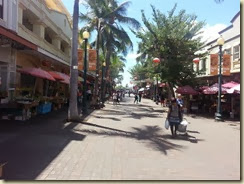 It is a fairly large area covering about 16-20 square blocks.  Some of the shops are thriving and some shops are shuttered.  Lots of Chinese spoken here (Hawaii’s population is about 65 percent Asian, the majority component being Japanese).

In front of the Bank of Hawaii, we noticed a sculpture called “Mole Circolare” (Circular Mass).  This sculpture was very similar to an installation we had seen along the pier in Copenhagen, Denmark in July 2013.  Couldn’t tell if it was the same artist – no attribution. 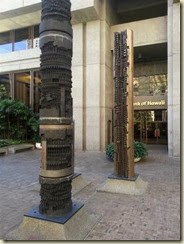 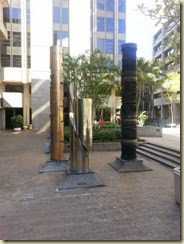 During our walk through the downtown area, we came across a statue of GN Wilcox, the Sugar Cane Baron, whose homes and grounds we visited on Kauai.  His reach is long. 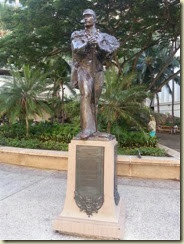 The downtown area is pretty compact so we were able to walk the short distance to the Government Buildings and the Palace complex. 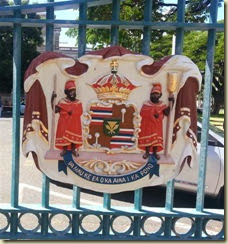 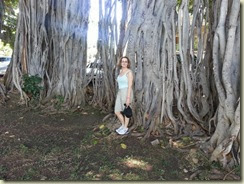 Statues border the front and rear of the Iolani Palace.  On the back side, you can find the statue of Queen Liliuokalani, who was Queen of Hawaii from 1891 to 1893.  She was the only reigning Queen and the last monarch of the Kingdom of Hawaii. 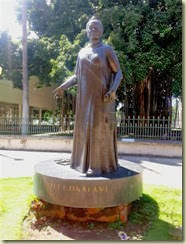 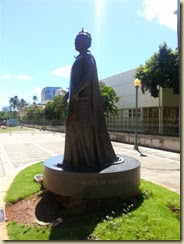 The Palace area has nice green space including a gazebo (below) 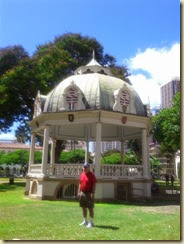 Facing the front of the Palace is the statue of King Kamehameha I, who united all of the Hawaiian Islands in the late 18th century. 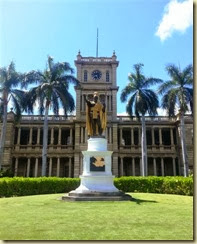 We circled back toward the pier so we could catch the free “Hilo Hattie” shuttle that was supposed to take us both to the store and to Waikiki Beach.  Along the way, some more photo ops. 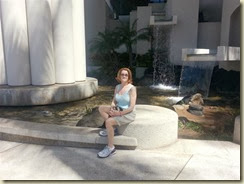 Ellen and a neat water feature 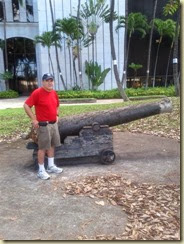 Me and an old canon (small city park)

One of the most unusual sites on our way back was a guy carrying a full Captain America uniform (shield and boots were visible).  It was like Steve Rogers was going to work as the superhero and didn’t have time to change. 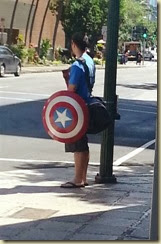 Back at the pier, we caught the shuttle just outside the pier entrance and in a few minutes we were at the Hilo Hattie Store.  We didn’t buy anything but that store was the jump point for a shuttle that would take us to Waikiki Beach as well as pass by nearly all of the hotels in the area.

Traffic in Honolulu is very heavy due to the concentrated hotel and shopping areas.  We finally got to Waikiki Beach.

We were here last in 1973 so things have really changed.  Many more hotels and shops.  The beach is still spectacular.  Most disturbing is the fact that Diamond Head, the iconic volcanic peak, is barely visible from the entrance to the beach – due to some “new” construction. 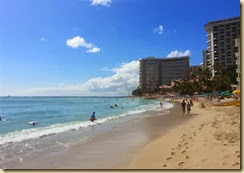 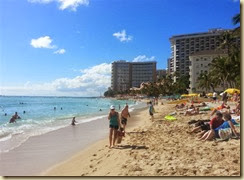 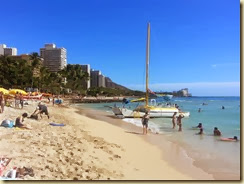 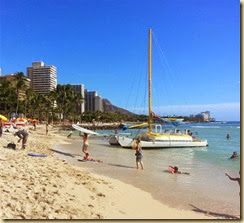 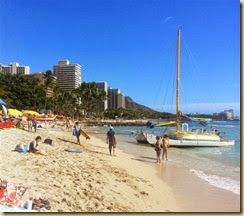 Waikiki Beach – Where is Diamond Head? 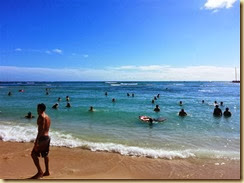 It’s not easy finding free shade on Waikiki but we did find some for the photo below – also semi-clean restrooms can be found at the beach entrance. 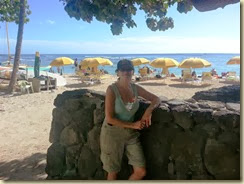 Made in the Shade at Waikiki

Appropriately, the walkway adjacent to the beach as a statue of famed surfer, competitive swimmer, and actor, Duke Paoa Kahanamoku.  He won five medals at the 1920 Olympic Games. 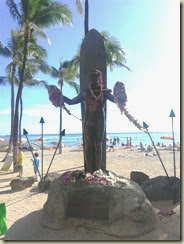 From the beach, we walked about two blocks to the International Market Place.  The shops in the mall basically sell the same things but it was shady and interesting. 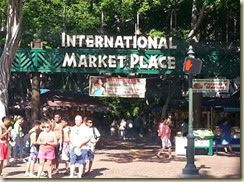 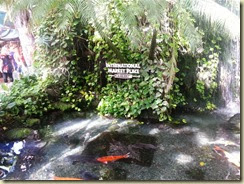 We returned to the bus pickup location and waited for the bus to return after its hour cycle.  It came a few minutes late and it was pretty much full – we got the last few seats.  The driver, realizing he couldn’t pick up any new passengers, bypassed the normal route back to the pier.  Instead, he took side streets – much less traffic – and picked up no passengers on the way back.  We were back at Pier 5 in about half the normal time.  Not so good for the people waiting at the 20 stops but good for us.

Soon, we were back on the ship (after passing through serious Hawaiian security).

Dinner was once again at Alfredo’s Pizzeria – almost like a specialty restaurant – pretty quiet and background music from live musicians.  Perfect.  We’ve improved the meal by bringing down salads from the Horizon Court – they also have a great Greek Salad and some veggie soups at the nearby International Cafe.

It’s a late departure from Honolulu so there are no shows tonight.

Instead a local Hula Dance School - Halau Hula Olana - put on a show.  There were two groups – kids aged 4 to 13 – and “adults” aged 18 or 19.  The 13 year old (left in the picture below) is a competitive dancer and the best of the group.  The mother of one of the young girls narrated the songs and explained the background of the dances. 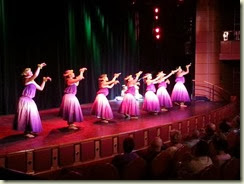 The older dancers were also good (the girl in the center was great) and looked a lot older than 18. 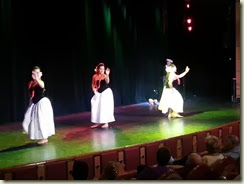 Both groups combined their dances in the finale.  At one point, the younger girls went into the audience to shake hands with the passengers. 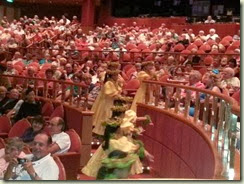 I was surprised by how much I enjoyed the show. 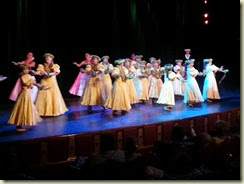