Local Information.  Hilo, located on the “Big Island” of Hawaii, has a population 43,260 and with 127 inches of rain a year, it is the wettest city in the world. 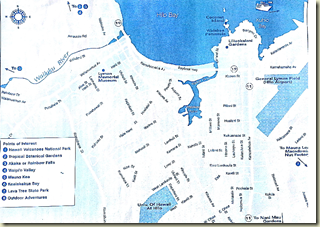 There are five volcanoes on the island of Hawaii – the home to Volcanoes National Park.  Mauna Loa – 14,000 feet – is the largest volcano (and active) on Earth even though it is about 200 ft shorter than neighboring Mauna Kea.  Kilauea – the most active volcano on Earth – has added hundreds of acres of new land to the island.

Because of the cloud cover today, the volcanoes are not visible from the ship and because of the government shutdown, no one is able to visit Volcanoes National Park.

We are just going to take the free shuttles to The Farmer’s Market and then walk around the town.  To get back to the ship, we will take the city bus.

On our way to the Market, we passed a municipal golf course.  It was pretty nice except that, instead of sand, the bunkers were filled with volcanic debris – I see scuffed clubs and sore wrists.

Don’t get in the bunkers

The town had some interesting stores and some catered to tourists.  Otherwise, the major streets were lined with restaurants and other eateries.

The Farmer’s Market was not all that great – just the same touristic stuff vendors sell at all ports. 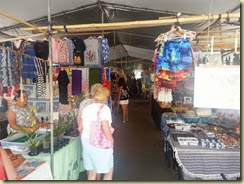 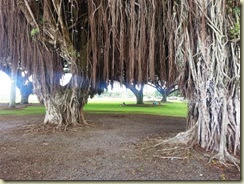 The city bus ($1.00 per person) took us on a little tour of the city including the campus of the University of Hawaii, Hilo.  Eventually, it let us out about a block from the pier.  We again passed through some serious security to get back on the ship.

Back on the ship, I was hoping the cloud cover would lift and we would get a look at the volcanoes.  No such luck. 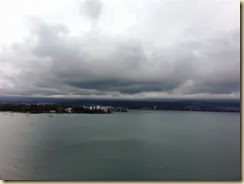 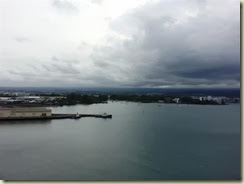 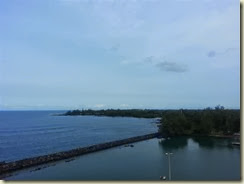 The headliner in the Princess Theater was comedian, Tim Walkoe.  Tim is from the Midwest and grew up in Skokie.  He was pretty funny and he will be on later in the cruise.

Hilo and the Big Island will be the last land we will see in several days.  Hoping for a smooth trip back.