A hot day on the Greek Island of Rhodes..Our first time here. 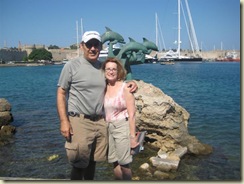 None of the tours in Rhodes looked that interesting so, since the ship is docked very closed to the Old City Entrance, we decided to walk around the Old Walled City of Rhodes.

The site of the “Colossus of Rhodes” – a Wonder of the Ancient World – is a bit up the harbor road but it is hot and we are not planning to go there.

The first stop is the Church of Virgin of the Burgh (ca. 14th Century) located very close to the gate to the city. 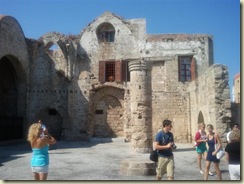 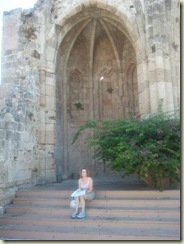 Church of Virgin of the Burgh

Near the church, we noticed a sign pointing out the Synagogue in Rhodes. We followed the directions to the corner of Dossiadou and Simiou Streets to find the Kahal Shalom Synagogue.  It is the oldest synagogue in Greece (the original building dates back to 1577) and the only remaining synagogue on Rhodes.  The synagogue still holds Friday night and High Holiday services for visitors to the island. 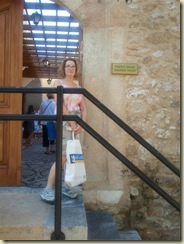 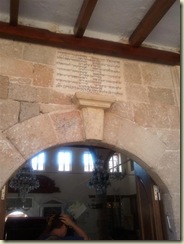 It is a Sephardic Shul with the Bimah in the center of the main floor. 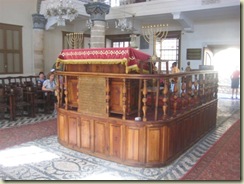 The synagogue has an ancient Torah on display that dates back to the 16th century (below). 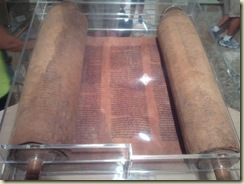 After our visit to the synagogue, we continue to the Platia Martyron Evreon (Square of the Jewish Martyrs).  This is the location where Jews on Rhodes were assembled before being transported to the camps.  The Square contains memorials to the Jewish Martyrs of Rhodes. 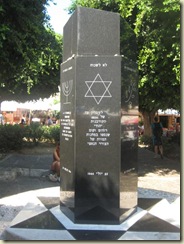 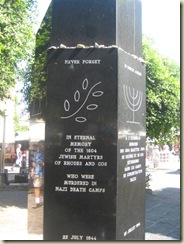 Jewish Memorials at the Square

The area around the Martyr’s Square contains excellent examples of Medieval architecture. 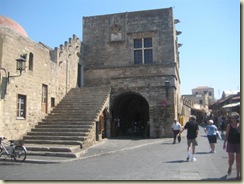 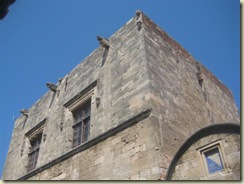 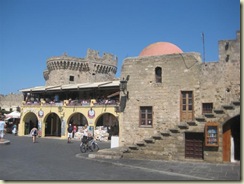 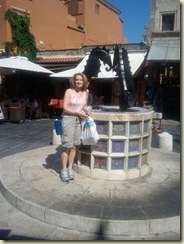 Martyr Square Structures and Fountains (above)

We rested a moment at Martyr Square to see whether I could access the Island wide WiFi System.  I was partially successful and able to check on e-mails.

Rhodes was also the site of activities related to the Knights of St. John of Jerusalem, who fortified the island against the Turks.  There are suits of armor just about everywhere ready for a photo-op. 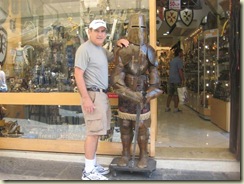 The knight below was, I believe, located near the the Hospital of the Knights (now the Archeological Museum).  This building was completed in 1489. 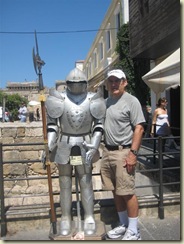 As we climbed up the hill, we could see the Mosque of Suleyman. This mosque was built in the early 19th Century on the site of the original mosque built in 1522. 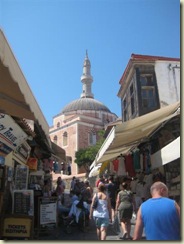 Once at the top, we headed back toward the ship.  The gate we entered was visible in the distance. At the harbor, there are several non-functional, but very picturesque, windmills.  The juxtaposition of the Mariner OTS and the windmill made for an interesting photograph. 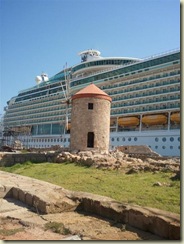 After a little snack, we went back out to the city to pick up some trinkets for the kids.

It was a very long day in Rhodes today according to the stats:

Two passengers had their fifteen minutes of fame as they had to run for the ship as it was readying for departure.  It would have been a long trip from Rhodes to our next stop, Istanbul.  The ship actually sent someone on a motorcycle to find our wayward shipmates.  Perhaps a little too much Ouzo. 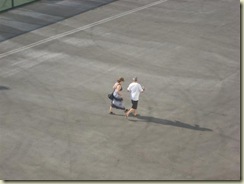 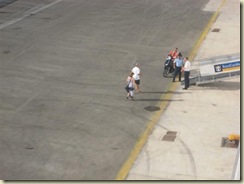 The sail away from Rhodes was beautiful. 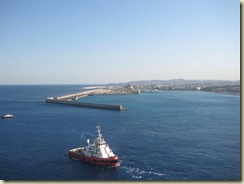 Showtime tonight was the ice show: “Ice Under the Big Top” in Studio B.  The show was cute and included some pretty good skaters.  I did notice that many of the skaters “came out” of their jumps – maybe the ice wasn’t optimal. 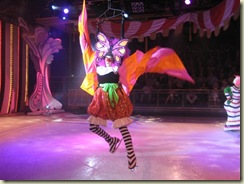 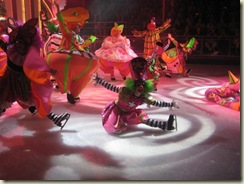 One act combined skating and a “cirque” type acrobatic moves.  The skater was very good. 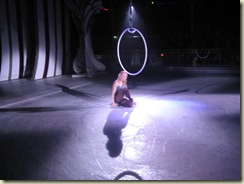 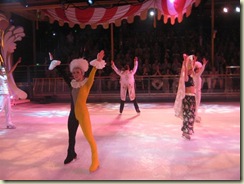