A mild day at Sea…

Pretty much the same routine today.

My second talk today  - “Mysteries of the Mediterranean” pulled in about 100 people today (the word might have gotten around”.  The new section on Columbus seemed to work pretty well (I am going to make some improvements).  One of the attendees said the talk posed a lot of questions but did not provide many answers – I told him that was the problem with the Columbus story – not enough solid information.

The highlight of the day at Sea is the transit of the Dardanelle Straits – the narrow strip of water that leads into the Sea of Marmara.  The Straits and the Gallipoli Peninsula were the location of a devastating WWI loss for British, French, Australian, and New Zealand forces by the Turks.  The site is now a memorial to the fallen soldiers. 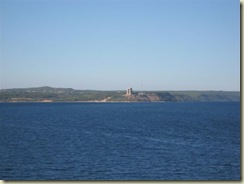 The WWI monument at Gallipoli

The weather was terrific for the transit and the deck was loaded with passengers eager to get a good shot of the memorial.  I did manage to get myself in a photo sans passengers. 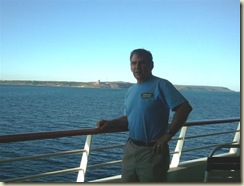 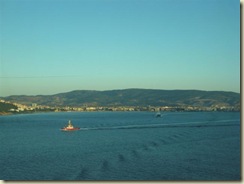 The Dardanelle Straits looking ahead 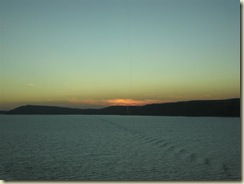 The transit also offered up a beautiful sunset complete with the ships wake trailing (above). 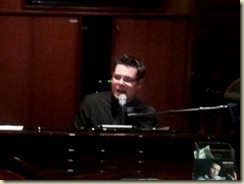 Darren in the Schooner Bar provided most of the entertainment for the day.  Again, he did not disappoint – I believe he even sang “Hallelujah” – a cruise would not be complete with that song.