We are now near Gate H2 Terminal 3 at a charging station (a row of seats with outlets between them – a good idea).  Our flight to JFK appears to be on time, although the plane was not here when we arrived.

The cruise we are on will take us from Rome to Messina, Athens, Rhodes, Kusadasi, and Istanbul.  It was going to go to Alexandria, Egypt but has rerouted due to geopolitical reasons.  We are sailing on the Mariner of the Seas – a Voyager Class Ship – complete with climbing wall, mini-golf course, and ice shows.  It also has a great Solarium, while not totally enclosed, is still an adults-only oasis. 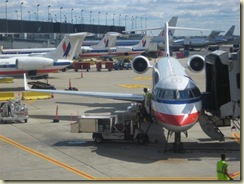 and our flight AA3855 leaves on time.  It’s a small (2X2 seating) plane but pretty comfortable and the flight to JKF is smooth with no “holds”. 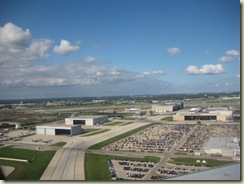 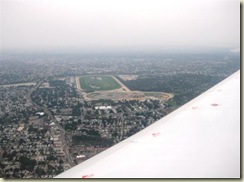 While taxiing to our gate, I noticed a new Aeroflot (Russian) (perhaps a 777 with “Sky Team” on the tail) on the tarmac (below).  The Russians have finally seen the light. 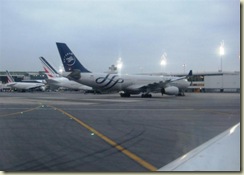 We only had about an hour between flights but stopped in at the Admirals Club near our gate to see if it was worth staying a while.  Although we had a couple of complimentary passes, the desk clerk said we could stay until our flight.  We did and partook of the veggies and dip and party mix.  It was nice.  We still have the passes for our return flights in a few weeks.

The flight was smooth for the most part.  We did have nice Kosher meals (Asian Chicken) but it is still weird to eat at near 10:00 PM and then try to get some sleep.  I might have gotten a couple of hours of sleep only to be awaked by some serious turbulence.  It was difficult to get any more sleep than that.

Sunrise was over France on this trip (below). 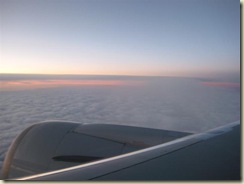 The picture below was taken to show how people can be confused by what they see.  The saucer shaped object is a small ventricular cloud, often mistaken (by the visually confused) as a UFO.  It is a cool cloud, though. 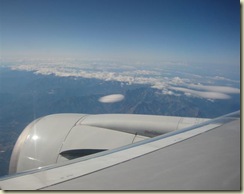 The plane crossed the Tyrrhenian Sea (below) and into Italy. 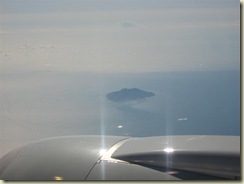 The plane touched down in Rome almost exactly on time (two pictures below). 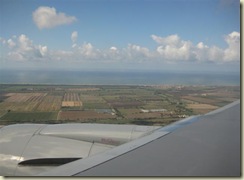 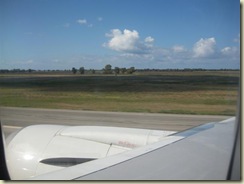 Our luggage arrived with us and after a little bit of a delay we were on the Trenitalia train to Rome, where we caught a Metro Train to our stop at Policlinico.  We lugged our suitcases a few blocks to the Best Western Globus Hotel.  The hotel is a nice, refurbished, hotel in a residential area near a University.

Even though we were tired, we took a walk looking for a restaurant for dinner.  We eventually wound up eating at the Hotel because we had no Euros and no one was taking charge cards.  We ordered Pizza and Fettuccini, which took forever to get our table.  We will look for other options next time.

We stayed up until 10:00 PM and that was it.  It seems like a quiet room and nicely air conditioned.