A beautiful day in Piraeus, Greece. 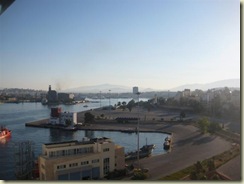 Piraeus, Greece from the Mariner of the Seas

It’s a warm day and we are not going on tour today (having seen the sights on previous trips).

Instead, we are going to walk around Piraeus – being Sunday, many of the shops and stores are closed.  The tourist places are open and we are going to be here in about a month (starting our next cruise) so a walkabout seemed like a good idea.  Besides, we need to find an Internet Hotspot to stay in touch with home.

We took the shuttle bus from our terminal to the other Main Terminal and then passed through the port gates into the city.  Fortunately, it is Sunday and traffic is light allowing us to cross the streets safely.

Sometimes, when you can’t find anyone to take your picture, you have to improvise.  All you need is a shiny window and you have a great photo.

Our walk took us through shops and through a little park.  The centerpiece of the park was an ancient Greek soldier. 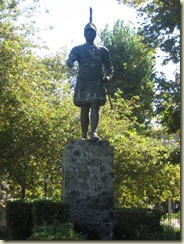 Statue of Greek Soldier in Park 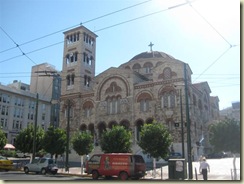 From across the street, I could see the Mariner of the Seas in the distance.  I braved the traffic, crossed the street and took a picture of our ship docked a few blocks away. 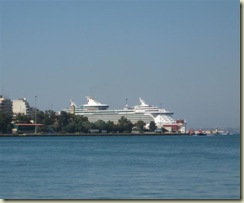 Mariner of the Seas from Piraeus

We were looking for a Starbucks or McDonalds for WiFi but couldn’t find any along the way.  We finally came across a Ben and Jerry’s Ice Cream Store – it turns out they had WiFi and the girl working there gave us the UN and PW.  I didn’t have my computer but my WiFi phone did the trick and we checked our mail and sent along a picture of us at the Ben and Jerry’s. 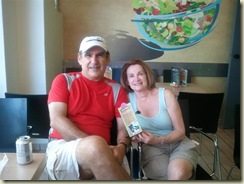 At Ben and Jerry’s in Piraeus

A statue of Poseidon in another park (check the trident) also caught our eye. 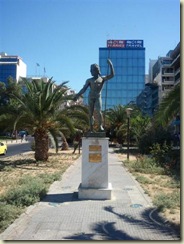 Poseidon in the Park

Back on the ship, I thought a picture with one of the dragons guarding the Dragon’s Lair would be interesting. 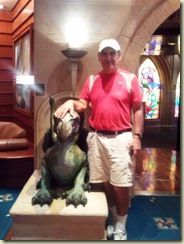 How to Train Your Dragon

The last time we were in Piraeus, we heard that the main port terminal had free WiFi so we went back out to the terminal to check e-mail.  After a little effort, we did find a place with a strong signal (NOTE: Next time:  sit by the gift shops – strongest signal).

We watched the sail away from the Viking Lounge (Deck 14).  In the sequence below, the Marine OTS is backing out of the harbor and past the seawall.  Pretty good maneuvering (probably done by the local pilot). 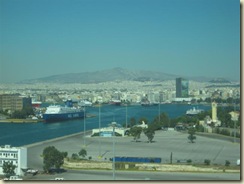 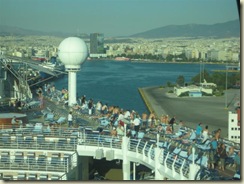 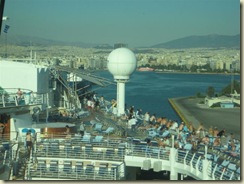 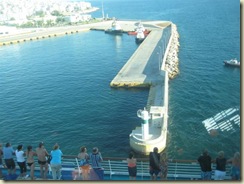 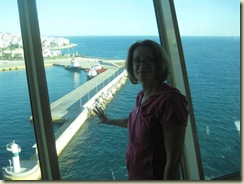 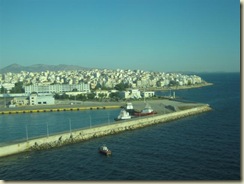 Piraeus Sail Away Sequence (above)

Dinner again was in the Windjammer Cafe, where we were treated to a beautiful Grecian Sunset. 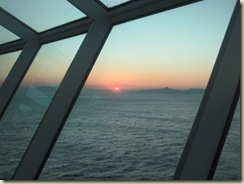 The Windjammer offers a different ice cream flavor each night – hand scooped by one of the servers.  Tonight’s flavor – Rainbow Sherboti – we couldn’t resist trying some. 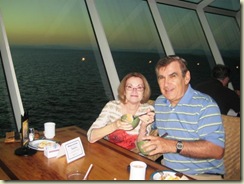 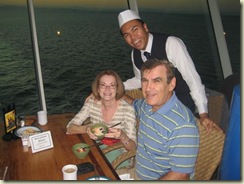 After diner, we ran into these folks – part of some show somewhere on the ship. 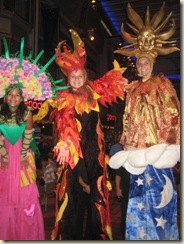 Tomorrow we are in Kusadasi…