Either the noisy people were quiet or I was so tired and my earplugs were so effective that I didn’t hear them and slept pretty well.  I went down to the breakfast room at 7:00 AM just as the Sun was coming up. 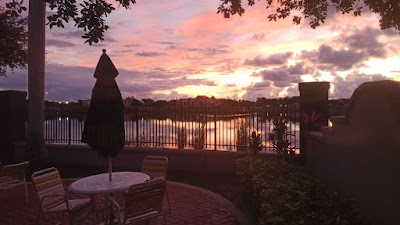 It was a very Spartan breakfast consisting of packaged oatmeal (got the last brown sugar maple pack) and packaged Lender’s Bagels (how far Lender’s has fallen).  No sweet rolls, a major disappointment.  There were hard boiled eggs and yoghurt also but not for me.  It’ll have to do but I doubt we’ll be coming back to this place again.  I doubt the lack of breakfast options is really due to COVID.  Ellen went down after I returned to the room for her posh breakfast.

We were in the lobby at 10:50 AM for our shuttle pickup.  The shuttle was running about 15 minutes late (probably later).  He did show up and manage to stuff all the bags into a standard shuttle vehicle (no suitcase trailer).  It was about a 30 minute ride to Port Everglades – there were three ships here today: Celebrity Apex, Celebrity Reflection, and HAL Rotterdam.  We were dropped off at the Apex terminal.  We found a manifest just sitting on a desk and found our room number – 6130 (it is always a relief to see your name on the manifest and with a room number attached).  We tagged our bags and dropped them with a porter and headed for check in.

I had all my papers ready and we talked with a lot of people trying to locate the Pier Coordinator.  We were on our way to the security check, when someone told us to follow them.  We walked quite a ways to the end of the terminal building to a place that said “Pre-boarding Testing”.  I was a bit confused since we had already shown our COVID results along with our passports to someone triaging people at check-in (in fact, we had both taken antigen and PCR tests two days ago).

We were told to take a seat and we would be called for another rapid PCR Test.  Apparently, we were listed on a spreadsheet to be retested.  We were told that contractors had to be retested.  After about 30 minutes, we were called to register for the test and then we were sent to the testing area, where we got swabbed and our samples taken to the machines.  We waited about 40 minutes for the results, which came via email for me and a hard copy for Ellen.  Not surprised that we were both NEGATIVE again.  Once, we got out test results, we were escorted to a special desk (the pier coordinator, maybe) to check in.

The first thing the woman told us was “you were upgraded”, magic words we have never heard before.  We were now in 11136 and for the first time in our cruising career, we are carrying Gold Sea Pass cards (Concierge Class).  I had no idea what kind of room this was.  We finished checking in and made our way to the ship.  When we got on board, we were told that we did not have to wear masks anywhere on the ship.  Everybody’s vax cards were checked and then photographed on check-in.  The ship is theoretically sailing 100% vaccinated (passengers and crew) (except for any young kids and there aren’t many of them).  While passengers quickly doffed their masks (except for us, who still wore them in the elevators and in crowds), crew members were all masked.  It felt a little strange as we headed to our room on Deck 11 Starboard Forward as nobody was wearing a mask.

Cabin 11136 was an “infinite veranda” room – it’s like a balcony without the balcony.  The veranda is like a sun room that can be closed off from the rest of the cabin and the top half of the window can be opened to get fresh air.  Just like a veranda essentially.  A very nice room in a good location. The bed was a real king and the bathroom had a very roomy shower and huge sink.  It was like our room on Edge but maybe a little larger and nicer. 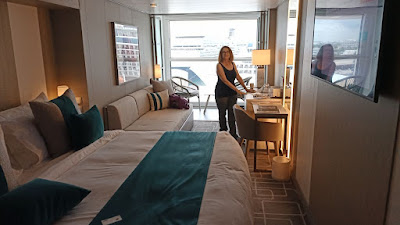 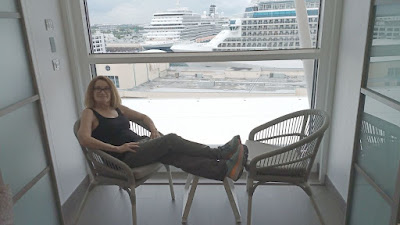 We met our room attendant, Kunal, who was aware of our room change and would make sure out bags made it to our cabin.  We then walked the length of the ship to the Oceanview Café for the lunch buffet.  The buffet is pretty much the same except that you cannot serve yourself and servers were all wearing gloves (I'm all for that).  Because the ship is likely not sailing at capacity, the buffet moved along pretty well.  I had a salad assembled (lots of choices including garbanzos and kidney beans) with good Blue Cheese Dressing and made to order Spaghetti Alfredo.  We checked out the desserts and I had some cheesecake.  Since we have been watching cooking shows we are newly aware of gelatinous desserts and the need to avoid them.  The lunch was very good.

I had a letter in my room from the Activities Manager - there was no mention of a video advert so that was good.  I am going to meet with him tomorrow to go over tech stuff - my first talk is scheduled for tomorrow.

The lifeboat drill has been replaced by in-cabin TV training - you watch a short demo video and then click off that you watched it and you're done.  No more "Agent Braun" - no sure I'll miss her.

We watched the sail away from our room.  It was sobering to see Celebrity Reflection docked as that was the last ship we were on prior to the Pandemic Shutdown in March 2020. 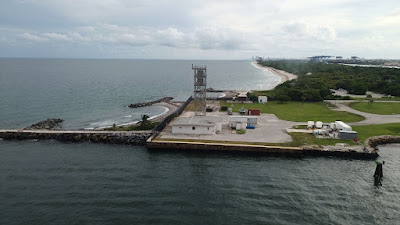 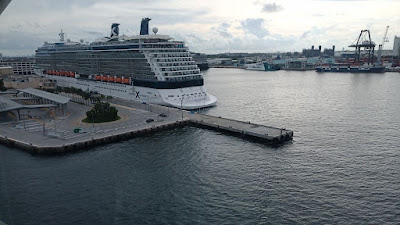 We went to the restaurant area on Decks 3 and 4 to check menus and make a reservation. We were able to get a 6 PM reservation at Cyprus, the Greek themed restaurant.

The hostess put us at a nice table for two next to the window at Cyprus. 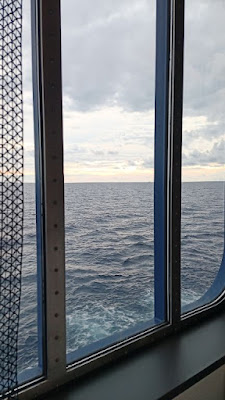 Here’s what he had (HMT Taverna Salad (Greek Salad – OK); HMT/ET Mushroom Soup (Nice); Seared Salmon – OK but I never like the skin left on; ET broiled salmon (OK); apple pie a la mode (very good); decaf coffee (good).  We shared the Saganaki but we both thought it was salty).  The service and ambience was excellent.

We met a nice couple from Florida (originally from Wisconsin) who sat next to us.  We were a bit nervous chatting with people but we had a bit of distance between us.  And again, everyone on this ship is vaccinated. Even so, this no-mask policy will take some getting used to (we are going to wear masks in the elevators).

Showtime at 7:30 PM featured comedian, Ralph Harris.  I didn't get a shot of him because of the lighting but the theater is a remarkable venue.  The screens are even more spectacular than what we saw on Celebrity Edge - bigger and clearer.  That background isn't real - it's a projection. 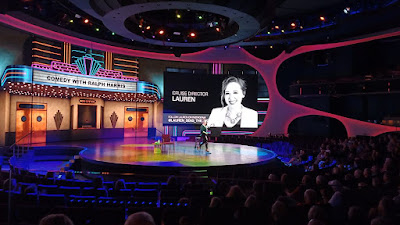 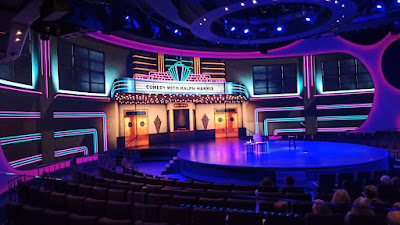 We have seen him before years ago so he seemed new.  Quite funny – played off audience comments and reactions pretty much and then did a little skit involving his 104 year old grandfather.  The math didn’t quite work out since Ralph said he was 73 years old.

We spent the rest of the evening in Eden listening to a pretty good guitarist vocalist - G Luz. 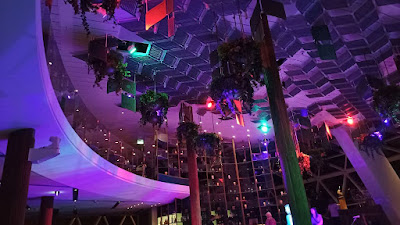 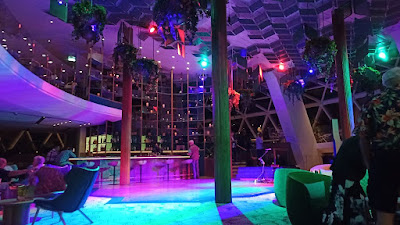 The room seems pretty quiet even though we do have neighbors on both sides.
Posted by Hal T at 1:10 PM