A terrible sleepless night- No real reason for this. Can’t blame this on iced tea at dinner or decaf coffee at dinner (only one cup).

Watched the arrival at breakfast.  Waffle with Cottage Cheese and Sour Cream and Orange Marmalade.  The waffles are always available – no waiting for three minutes for a fresh waffle. For the first time on this cruise, the scrambled eggs today were sadly dry. Hopefully, an anomaly.  I did get a chance to see the sail in during breakfast. 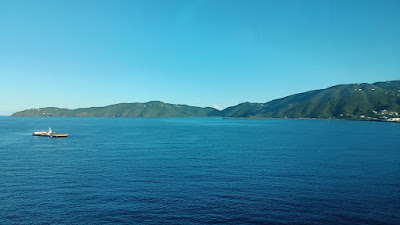 COVID Rules on St Thomas – fully vaccinated – masks all the time but you can walk around on your own (as in San Juan).

The ship is docked at Crown Point Pier, the alternate port for big ships, which is a couple of miles away from Charlotte Amalie.  This is the usual docking area for QM2 because of the ships length.  There is a little shopping area near the ship, that we have visited in the past.  This time out, I didn’t see a lot of benefit in getting off the ship – we are still planning to play it safe by not disembarking at any of the ports. 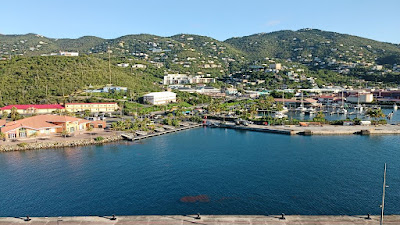 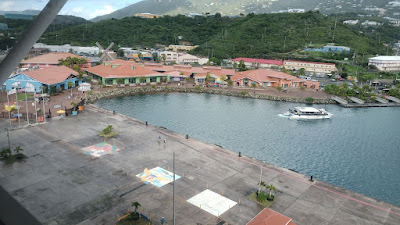 Went up to the Oceanview Café with Ellen for her breakfast and had a mid-morning brunch of sorts.  I had a few pieces of herring and a plain waffle and baguette (did not eat all those breads).  NOTE:  The herring in wine sauce would disappear in a day or so and be replaced by herring in some kind of orange sauce.

While a lot of people were ashore, we found some nice lounge chairs in the Solarium.  I opened the window to get some air and cool off the Solarium a bit.  I tried to real some books on my Kindle – one, “The Abraham Secret” (I think) turned out to be White Supremacist novel (so I deleted it).  I went back to another book that I had started a while back called “Reckless: Book 1 – a Mia Kazmaroff Mystery”.  I went back to the beginning of the novel and am reading it now.  I get sent free Kindle books daily from this site I signed up for and this is one of them.  The books OK so I’ll give it a while before looking for something.  Mia Kazmaroff has a superpower that allows her to touch an object and know all kinds of things about it.  This allows her to work with the Atlanta PD detectives to solve cases.  We shall see.

For lunch today, I ordered up another veggie burger from the Mast Grill (still can’t tell which it is but I’m leaning toward the Beyond Burger even though it’s not as pungent at the BBs I eat at home.  To make identification even more difficult, this burger is bigger and shaped differently from the commercial Beyond Burgers I get.  I had the burger with some fruit from the Aqua Spa Café – so a pretty healthy, protein and fiber packed, lunch.

The last time we were on a ship like this (Celebrity Edge) we could not get a seat alongside the cabanas (which you have to pay for).  Because this ship is not at capacity, almost all the seats were available.  They are comfortable and not windy (when the ship is moving, it’s like a wind tunnel along that corridor).  The music was not too loud so we hung out there until it became too warm.  We then retreated to our cool and comfortable cabin.

Dinner tonight was in the Tuscan Restaurant. 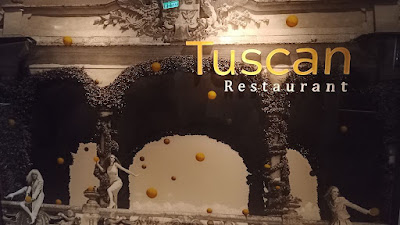 We got a table for four by the window so we were able to watch the sail away. 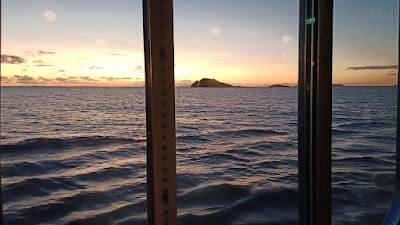 I also put the camera up against the window and got both the sea and sky but also the Moon and Venus (this photo is now my phone home screen image), 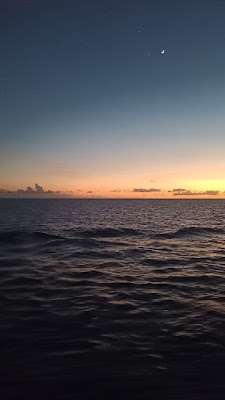 Here’s the scoop on dinner:  We both had the Asiago Cheese Flan with Mushroom (absolutely delicious); I had the Cream of Broccoli Soup (OK) and the Boston Lettuce Salad with Gorgonzola and Walnut (with Walnut Dressing) – the best salad I have had on a ship in a long time.  Ellen had the usual broiled Salmon and I tried the Tuna in Putanesca Sauce (Tuna was a little over done but the dish was very nice).  I also tried the Pappardelle with Mushroom Cream Sauce and Cognac (hold the short ribs).  It was very good but I only wanted an appetizer portion.  We shared an Apple Tart Tatin with ice cream.

Showtime tonight features the first Production Show of the cruise – “Rockumentary”.  The singers and dancers will highlight the key moments in rock history by covering the songs by iconic artists.  We got to the theater early to get the coveted seats on the left side of the theater – four seats and generally no one will sit next to you.  We also tried out our sound dampening earplugs that I purchased for cruises that were cancelled.  They actually worked to some degree and I believe the volume was actually lower than we had seen on Edge.  The vocals (Beatles, Grace Slick, Stevie Nicks, Simon and Garfunkle, etc) but the electric guitar and drums set up a resonance that was uncomfortable.  The dancers were phenomenal and the singers were not always understandable because of the volume. 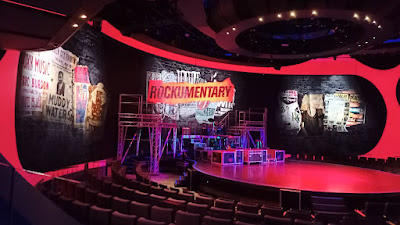 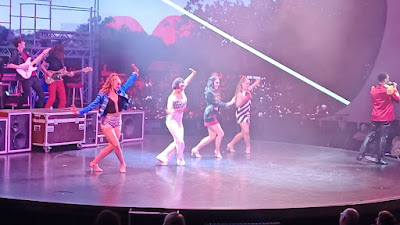 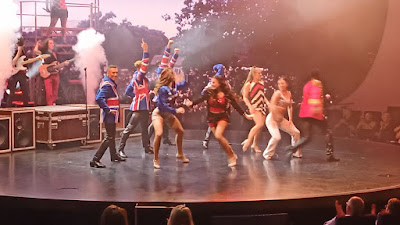 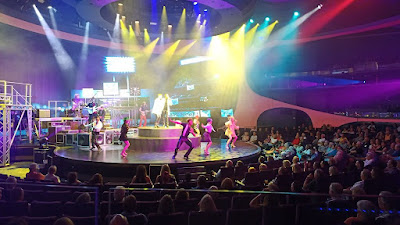 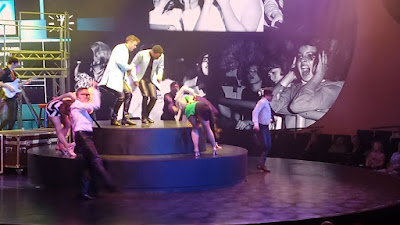 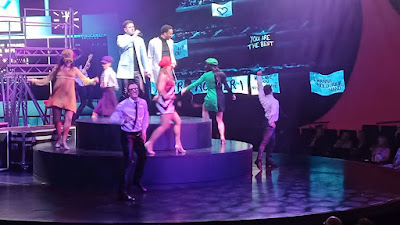 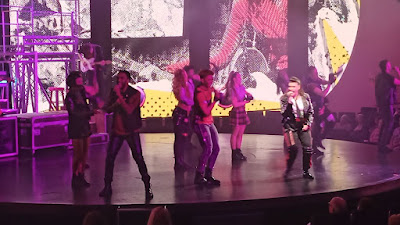 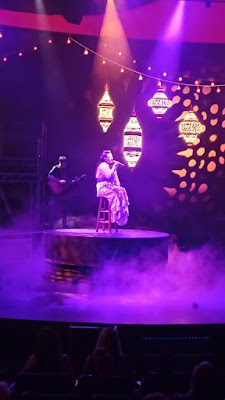 We departed after about 40 minutes and headed for the Aft Deck. It was a beautiful night and we just sat out there in the quiet.

The Eden Cast was scheduled to perform “Night of the Arts” at 8:45 PM.  We got our usual nice seats but as show time got closer the place filled up and the passengers pulled chairs from the hallway and filled up the area in front of us so we couldn’t see that well.  The on board artist painted some hands releasing doves while a violinist and sax player accompanied a pianist for some numbers.  Then a couple of singers did a number.  It felt like the show was over but the aerialists were on next. 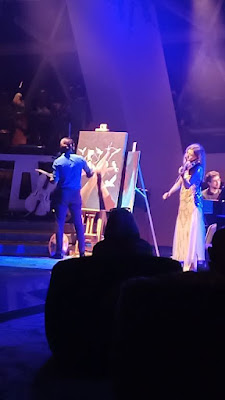 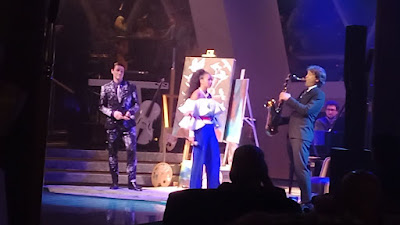 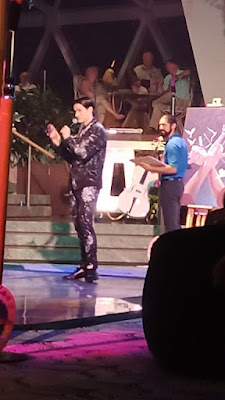 At this point, the music volume got loud and we decided that we should leave.  We will catch this show again but will see it from different seats (maybe up on the upper levels).  On our way back to our cabin, we picked up some mini-pastries from Café al Bacio – I had the mini lemon meringue tarts, which were good. Spent the rest of the evening in our room.