We are arriving in Puerto Rico at around 3:30 PM this afternoon, so my second presentation has been scheduled for 10:15 AM in the Theater.

Did not sleep well last night even though the room was quiet - on the upper decks, you can sense ship movements not normally felt - perhaps the shimmy kept me from sleeping.  Who knows?  I went up to the Oceanview Café at 6:45 AM as the program said it would open at 6:30 AM today.  It wasn’t quite open so I had some coffee while I waited.  I am still wearing my mask in the elevators – I am guessing that other guests think that either I’m unvaccinated for health reasons or vaccinated but not immune or that I just like to wear my mask.  Actually, just being cautious – there’s a lot of cruise left.

It’s a beautiful day outside as I have my banana pancake with chocolate syrup and walnuts plus scrambled eggs.  All delicious today and the pancakes seemed freshly made even though they came out of a pan. Celebrity is using some kind of food magic to accomplish this - normally, pancakes turn to cardboard soon after coming off the griddle.  BONUS - another gorgeous sunrise. 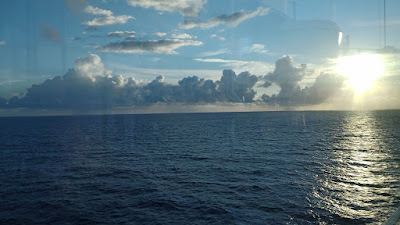 Before I went back to the room, I took a brief walk around the ship. In the past, because it was still early, I would take a few laps around the track - the disc issue won't allow for any extra walking.  Though the walk was short, I got a nice view of the ocean from the Aft Deck. 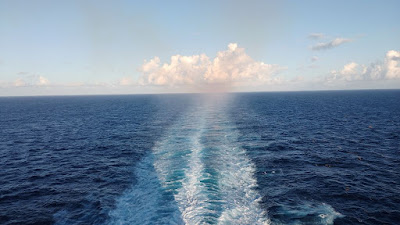 I did do a little walking on the jogging track – not a big fan of uphill walking. 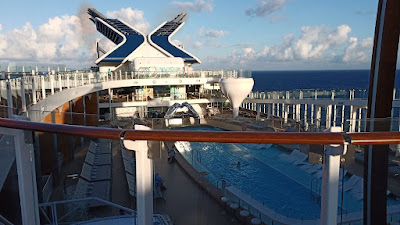 However, you can get some real nice views from the jogging track. 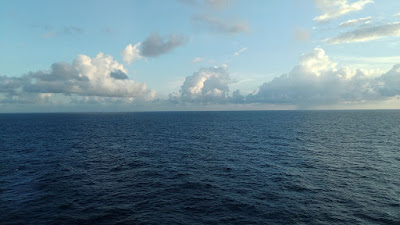 I also went up to the Rooftop Garden, where we hope to spend some time during the cruise.  The ship shows first run and newer movies up there every morning.  If you can find shade, the theater is yours. 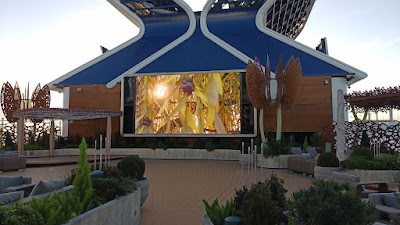 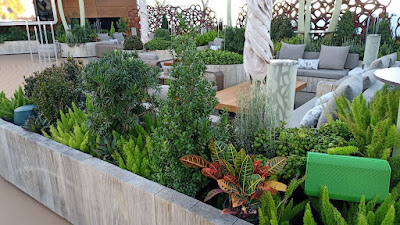 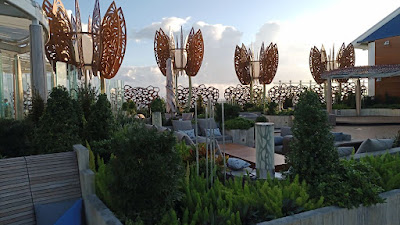 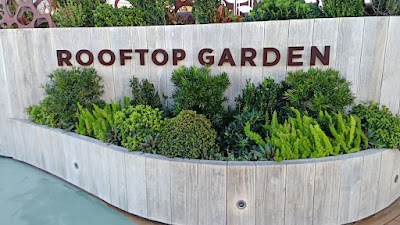 Ellen ordered room service today – some hardboiled eggs and fruit.  Eating on the Veranda is a great treat. 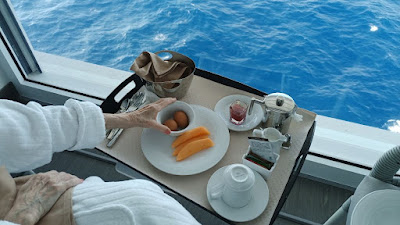 Although room service is a nice perk, I can bring her the same breakfast (even better version).  That is, after all, the real reason I am on this cruise.

My second talk – “Forensics and History:  Search for the Unknown Titanic Child” looked amazing projected on the theater screen.  Today, I was introduced by AM Darren. 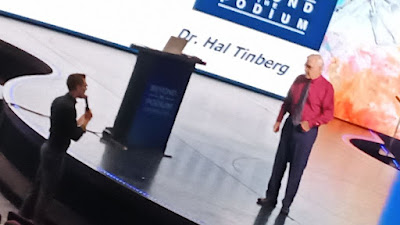 Before the session started, I wandered into the audience to chat with folks.  A good way to get to know your audience. Even though I am wearing a bright red dress shirt, can you spot me in this pic. 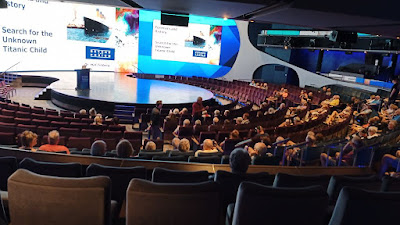 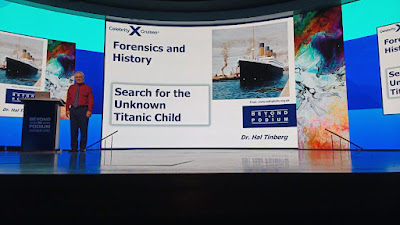 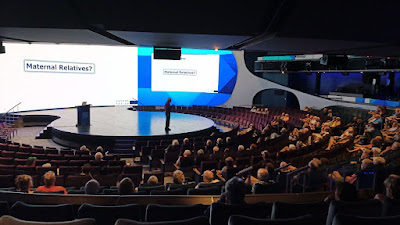 The attendance was better than yesterday and the crowd was interactive and attentive.  I did run late (15 minutes) because I added a ditty about Rasputin and spent too much time on other items.  No fallout from the lateness so far.  Quite a few people stayed after to ask questions and share.  That made me nervous because even though I moved away from people, they continued to close the gap between us.  Fortunately, I hope, we didn’t spent enough time face to face to be a problem (and also, everyone is supposed to be vaccinated and hopefully not infected and asymptomatic).

I went to the Mast Grill on Deck 14 (just outside the Solarium) to order a veggie burger.  I couldn’t tell if it was a Beyond Burger or an Impossible Burger but it was good. The burger didn’t have a strong odor like the Beyond Burgers I have at home – maybe that’s a clue. I might have another before this cruise is over.  That along with some coleslaw from the buffet completed lunch.  Ellen tried their pizza – I think she liked it but the sauce was too sweet for me.  The pizza is constantly being baked - pieces do not sit under the lights for long so the slices always seem fresh.  We ate in the seating area at the side of the Oceanview Café which gave us enough separation from other diners.

We spent some time in the Solarium.  The loungers are comfortable and the chlorine is not a factor but the venue was a little warm so we retreated to our room, where it feels like we are on the open deck but the temperature is controlled.

We arrived on time in San Juan – we watched the sail in from our room.  There were several ships here today.  One of them is Viking Orion, which I am booked on in February 2022. 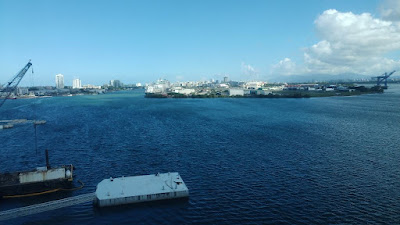 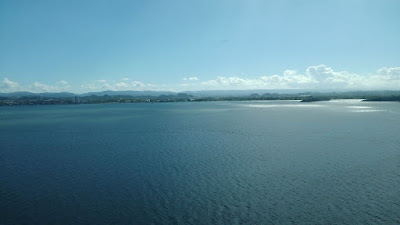 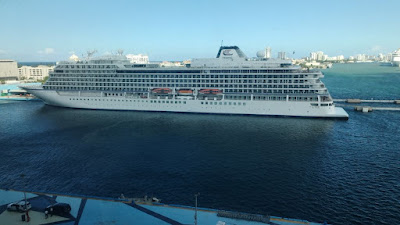 A few passengers got off the ship.  COVID rules in San Juan – fully vaccinated (show your cards on the way out and in) and masks indoors and outside.

There is art everywhere on this ship - in fact, Ellen is slated to take an Art Tour of the ship a bit later in the cruise.  One example is the wall of Plates.

We went to the Normandie Restaurant for our 5:45 PM dinner reservation.  I ordered: The potato/gruyere cheese tart (a very tasty knish); Ellen had the fried Brie (she really like it); I had a Cesar Salad and the Halibut (made without the smoked bacon).  Ellen had the trout. We both liked our fish – the halibut was pretty much the best fish I have had on a ship.  For dessert I had the NY Cheesecake and the Lava Cake (ET had the Cake too).  The desserts were both good.

We wanted to get two seats away from other people in the Theater so went a little earlier than usual to see tonight Show starring singer Jesse Hamilton Jr.  We saw him about three years ago.  His claim to fame was that he played Simba in the Lion King (the first time we saw him, he said he had played him for six years; tonight, he said that he had introduced the character to the Asian theater audience.  Most likely, both are true.  He has a lot of energy and a booming voice but he needed to mix up his genres a bit more.  He did sing three ballads – “Somewhere” from West Side Story and “Can you Feel the Love Tonight” and “The Circle of Life’ from the Lion King.  Beyond that, he went into extended “soul” music replete with endless electric guitar riffs.  He also sang a couple of songs with Savanah Smith (a vocalist who will perform later on this cruise) at super high volume.  We left a bit early while he was doing another long guitar supplemented soul number. 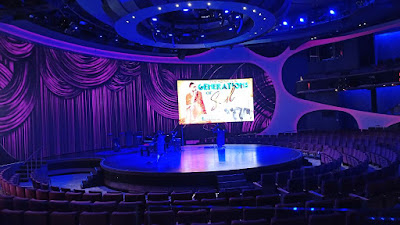 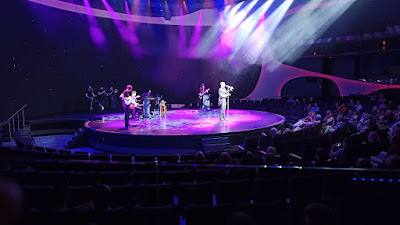 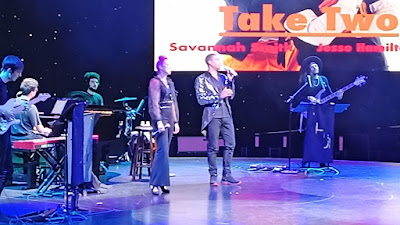 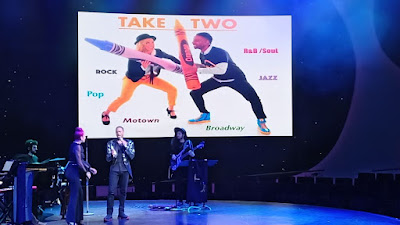 Our next destination was Eden, where a guitarist and vocalist were waiting to go on.  It turned out that their music was just a repeating set of electronic and live chords.  Nothing that we could really relax and listen to.  The Program is not listing the performers in Eden so we don’t who anybody is in that venue.

From there, we went to the room.  We were able to watch the late night sail away. 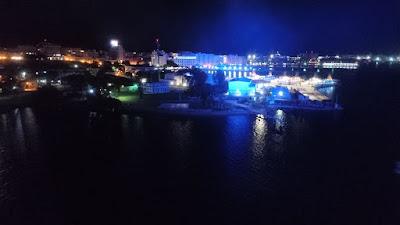 I should mention that Kunal, our room steward, brought us a nice fancy Celebrity bag and two Celebrity Caps (fancy ones made by Head).  Nice perks. Part of the Concierge Experience.

The room is quiet and seas are smooth.