As we approached Castries, I was able to get a picture of Les Pitons, a key geographical feature of St. Lucia. 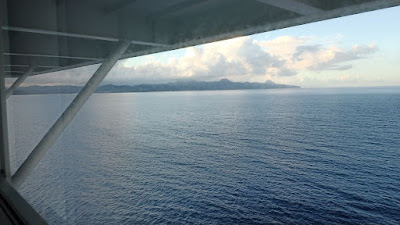 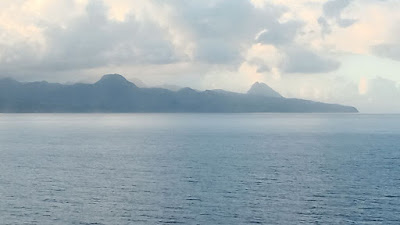 Breakfast was in the Oceanview Café (where else).  Today, it was waffles, cottage cheese, sour cream, and strawberry and marmalade jam.  Also had some scramble eggs, which after two days of being over cooked and dry, were back to their buttery wonderful self.  I also ate one of my two mini biscuits.

The ship also passed a small airfield and it seems a small plane some time ago did not make a successful landing - the plane is still sitting to the left of the runway in a ditch. 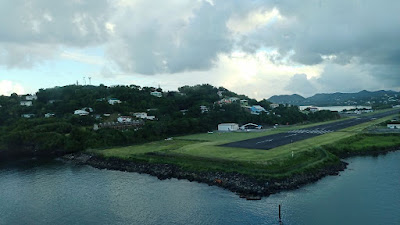 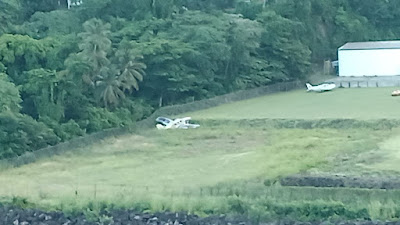 As we pulled alongside the pier, it started raining and raining hard.  The crew had to get all of pad off the deck chairs before they got soaked. 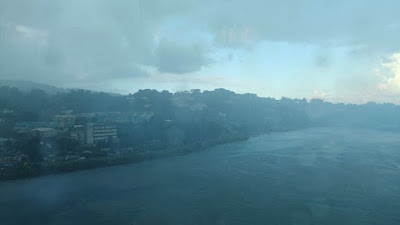 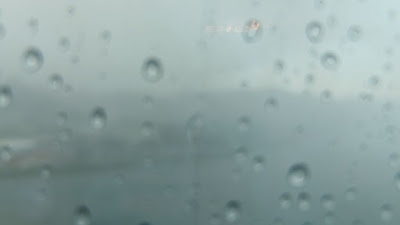 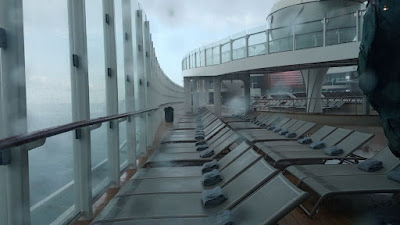 Viking Orion is also here today - must be running the same itinerary. 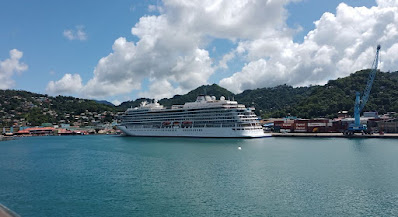 Had a second breakfast with Ellen (she didn’t like her room service fare).  Had some herring with a roll (wonderful) and coconut French Toast. 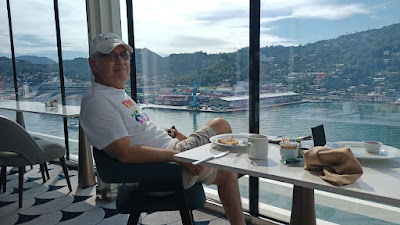 After breakfast, we went to Eden (after passing through the weird and fascinating hall of shiny rocks) 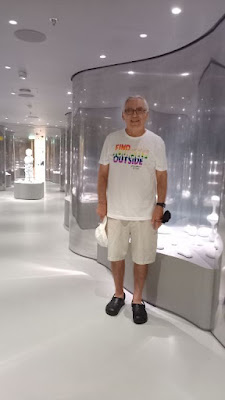 and tried sitting in the swinging chairs – the only noise was the trivia being run by one of the entertainment staff.  There is a very strange piece of sculpture on the deck outside of the Eden Cafe - a blue man with trees growing out of his body.  Not sure what it means. 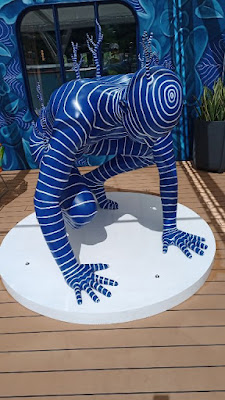 We wanted to have lunch in Eden but it was closed – we were told they are not open on port days.  Instead, we went to the Oceanview Café, where I had a salad (the ranch dressing was very good) along with some Macaroni Salad (very good).  We both had veggie spring rolls (good) and veggie Pad Thai (good but really spicy).  Subbed in a slice of Pizza Margherita (which was good).  I had a waffle cone with Rum Raisin ice cream (first time ever) and it was OK.  If I haven't said it before, the freshly made waffle cones are really good.
I got a nice shot of the pool deck from the Cafe. 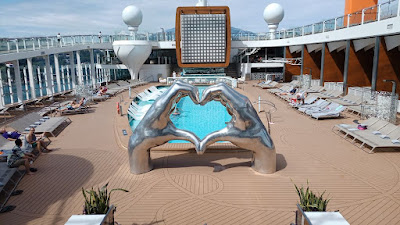 We sat on the back deck outside the Café until it got to hot; we are back in our room for some P and Q.

We are not docked in downtown Castries - the ship is too big. Instead, we are alongside in a lagoon.  There is a small shopping area and a new "St. Lucia" sign that people used as a backdrop for pictures. 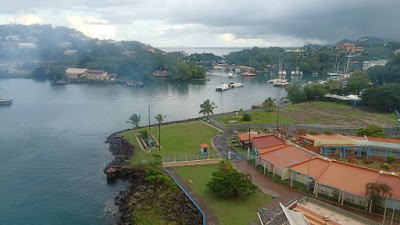 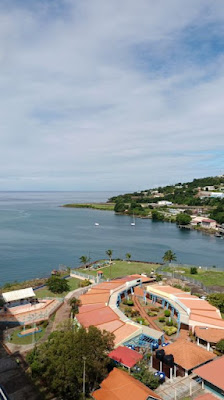 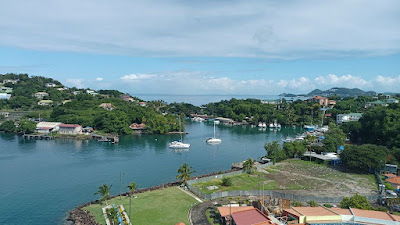 After giving up on two free Kindle books, I started a third: “One Day Gone – a Mylas Grey Mystery” by Luana Erlich.  Mylas Grey is an independently wealthy lawyer/investigator who is the Lead Investigator for a Senator.  His main job is to vet potential judicial appointees but he winds up dealing with something a lot more serious.  So far, I like the book.

No dinner reservations tonight so we are up in the Oceanview Café.  There were quite a few people up here so it took us a while to find a table with distance.  I was first in line for the pasta chef who made me spaghetti Alfredo with sautéed onions, broccoli, tomatoes, and garlic.  It was really good and the ingredients listed indicated that the sauce was vegetarian (I used to have to ask).  The pasta was accompanied by a green salad (you still can’t get stuff yourself on the buffet) with really good Ranch Dressing.  I tried some cakes but I have been very wary of cakes since watching baking shows (gelatin). 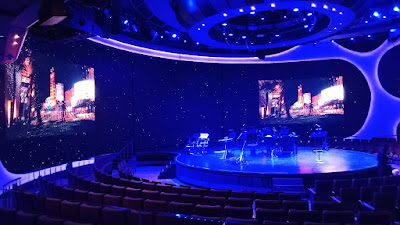 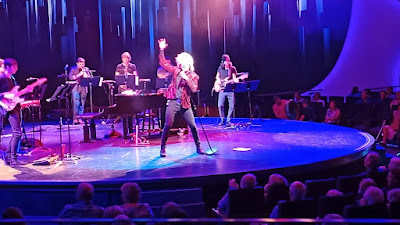 Believe it or not, we saw Greg 11 years ago and we liked his show.  This show will be different as he is doing impressions of rock stars.  Before we left, he did his take on Johnny Cash, David Bowie, Rod Stewart, Jim Morrison, and ZZ Top.  All of the segments are short but it was still a bit noisy and the artists are not our favorites.  Still good to see that Greg has had a long shipboard career.  Tonight's Showtime was special as Darren was the “Cruise Director” for the evening.  He said he was training to be a CD and this was part of the process.  He did a good job.

We next spent some time listening to the light music from the guitarist up in Eden.  We stayed for his whole set, which was entertaining.

I thought we might go up Deck 14 Aft (seats outside the Café).  It was absolutely beautiful up there.  The sky was clear and we could see not only Venus (very bright) but also Saturn and Jupiter, which were in alignment with the Moon.  I actually was able to get all of those planetary bodies in a photo. 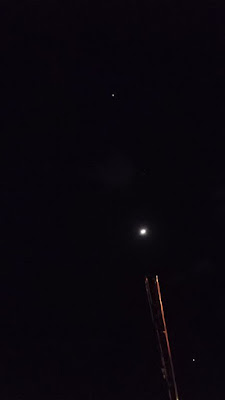 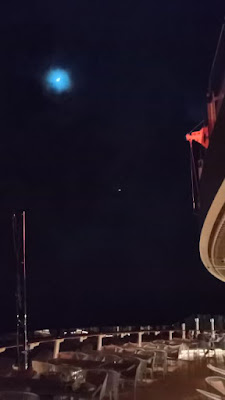 Back to the room to settle down (it was actually getting a bit crowded up there as it is a place for that the entertainers use).