Hang a left out of the room – go down to the first elevator access – go to Deck 14 and you are at the entrance of the Oceanview Café.  I was up there at opening time and got my favorite table in the far corner in the ice cream area.  There was nobody there with me.  I am going to wear my mask in the elevator because it makes good sense.  Otherwise, distancing is the tactic.  No one is wearing a mask in the Cafe except for Celebrity crew members.  I was also able to catch the first sunrise of this cruise. 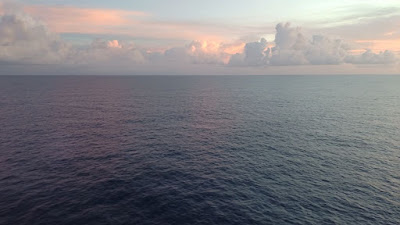 The first breakfast of this cruise consisted of a waffle plus cottage cheese and sour cream (really good except that I put raspberries on the waffle instead of blueberries so I had to deal with a lot of seeds) and scrambled eggs (which are insanely good).  The coffee - still serving Lavazza - was strong but OK.  Next time, I will dilute the coffee with some hot water.  This will be a breakfast that will be repeated often during this cruise.  Making the breakfast even better was the terrific view from my favorite seat. 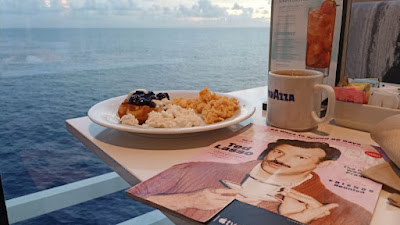 My first talk is scheduled for this morning at 11:15 AM.  At 10:30 AM, I had an appointment with Darren Moore, the Activity Manager, to go through a tech check on my PC.  I got to the theater on time but was met instead by Lauren Michelle Vaitkus, the CD (Darren was busy).  We chatted a bit but never really did the tech check. 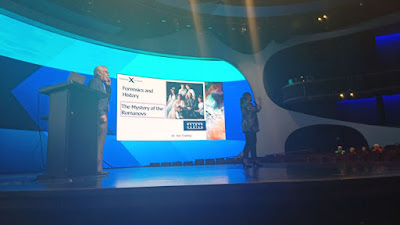 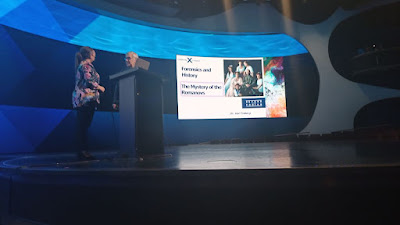 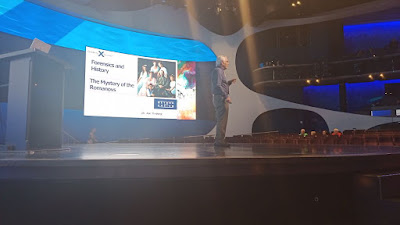 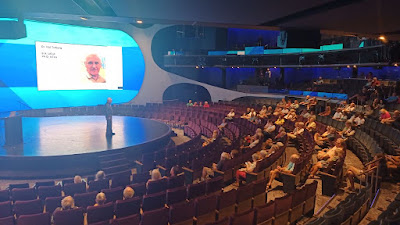 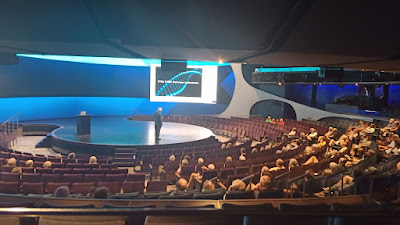 I didn't anticipate any issues since the ship is using an HDMI input.  As soon as the Shorex presentation was over, I was hooked up to their system by an AV tech and we were set to go.  I had very small crowds on Celebrity Edge but this first talk had a very good turnout (couldn’t count them but there was at least 100 attendees).  Lauren introduced me and my talk finished just two minutes late at 47 minutes.  The audience seemed to like the talk based on feedback and applause.
The Celebrity smartphone app displays an events calendar for the entire cruise, including the Beyond the Podium Lectures.  The times, of course, are subject to change, but for those cruisers who are tech savvy, the app lets them know exactly what's happening.

We changed and had lunch in Eden.  They have really good tuna and I also had a salad along with the side of potato salad (which I won’t get again).  The sandwiches were on sourdough bread and were perfect.  We ate inside (too hot and too windy outside) but away from people.  We had the banana walnut bread for dessert – very good.  We also managed to catch the Eden Cast (a separate cast from the Apex Singers and Dancers) practicing some of their moves. 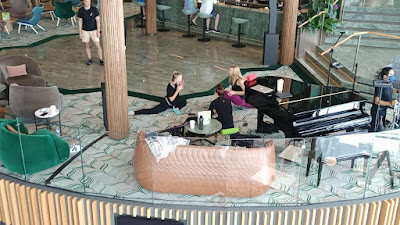 We spent some of the afternoon in the Solarium.  The issue with this venue is the chlorine from the pool and the temperature (a tad too warm when the outside temperature is also warm, 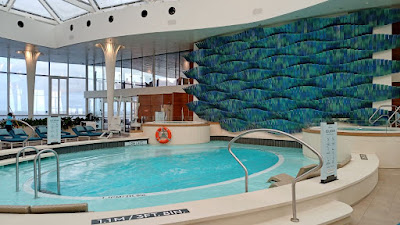 Earlier in the day, I tried to set up dinner reservations for the week using the Celebrity app but couldn’t get one for tonight.  When I tried again in the afternoon, I was able to get one for 5:30 PM in the Cyprus again.  The menu was different – I had the corn soup and the watermelon and feta salad; the entrée was Greek Style Sea Bass (which I didn’t like).  Ellen only had the broiled salmon.  We both had the Apple Crumble a la Mode (good).  The service was good and our table, #511 was a great one, two people at a table of four and no neighbors.

Showtime tonight was violinist Katerina Rossa from Ukraine.  We have seen her before and we stay for only a couple of songs before heading back to our room for the evening. 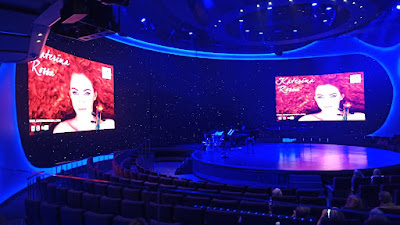 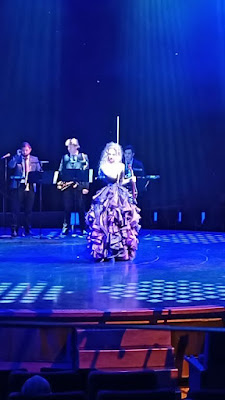 We walked across the deck to get to our room - the resort deck was all lit up. 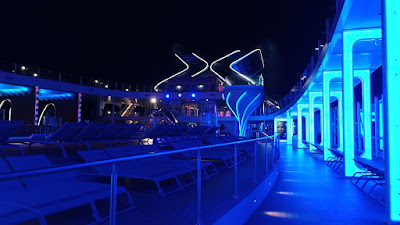 The seas are smooth and the room is quiet.
Posted by Hal T at 6:22 PM