I had another IDMLS in the International Café and went through today’s presentation.  The coffee on this ship is excellent and reasonably priced.

Although I thought I had removed time consuming animations during the Mexico Cruise, there were still a few that needed to be changed.  I was able take most of the zooms out which add up to a few minutes or so.

The day is filled with tons of activities including three Enrichment Lectures in a row in the Vista Lounge starting at 12:15 PM. I am next at 1:15 PM with “Forensic Detectives: The Search for Jack the Ripper”. After me is the first lecture by Dr. Richard Bosworth (husband, I assume) of Elena Bosworth (Cellist), who is speaking on “Music Appreciation”.  The advert for my talk was projected on the screen in the lounge. 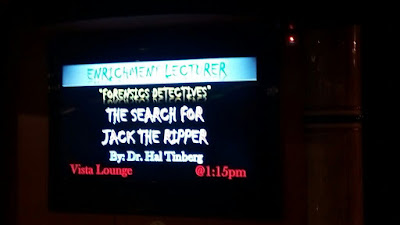 We went to Horizon court when they opened so I could get something to eat before my talk. Today was "Taco Day" at the buffet – I settled for the cheese and jalapeno quesadillas – very hot but tasty. I tried a salad with blue cheese dressing but Ranch and Thousand Island are still my favorites. Just enough food for a soon to start lecture.

Gloeta ran about 10 minutes late and then was still selling her goods (cards with odd poetry) right in front of the stage. She left as I was about to start but the back to back set up forced some double attendees to stream in late delaying my start by a few minutes. The house was full and the talk went well but ended up a few minutes late.

At 2:00PM, the ship scheduled a split variety show featuring Juggler Regatz  and Ventriloquist Bob Watkins in the Princess Theater. I was afraid that people in my talk would leave about 15 minutes early but that didn’t happen and when we got to the theater, the audience was sparse. When we got there Bob Watkins was on – he was still pretty funny. When the juggler came back on we took off.  Funny thing – when the juggler came up our aisle looking for a volunteer, he tapped me on the shoulder twice but didn’t ask me. He looked at Dova and she told him no – he finally snagged a guy a row back.

I changed my clothes and went to the Crooner’s Bar to warm up (the ship is still cold) and read. I am trying to finish “Trace” and I am pretty sure I know who the killer is.

We arrived in Ensenada 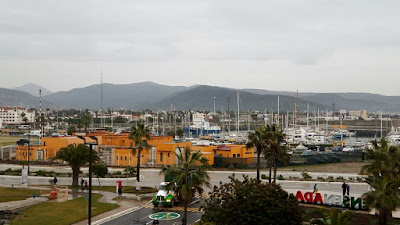 to complete the Jones Act Paperwork at 3:00 PM. The weather was wet and dreary – some people got off (just to touch land) but we didn’t think it was worth it because all aboard was 6:30 PM. Not enough time to do anything by the time you walked to the town.  We were joined in this port by Crystal Serenity. 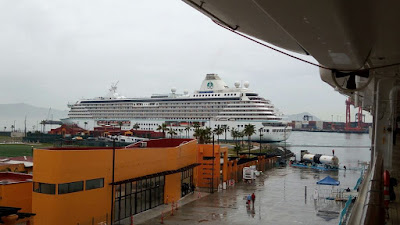 We are in the Michelangelo Dining Room for dinner – we pre-ordered some veggie Onion Soup, a seafood free broiled trout, some veggie Spring Rolls (a surprise from Danny), and two kosher meals for Leo (who likes the prime rib meat). It was a little complex but our waiters handled it well and everything came. For my entrée I orderedthe child’s “Spaghetti Snakes” with no meatballs. It sounded nice but the tomato sauce was a little too sweet for my taste. No problem, the onion soup was very filling.

Although it was 7:25 PM, we decided to take our chances in the Princess Theater. We were surprised that there were plenty of seats left including our desired seats on the right side of the theater about four rows up. Todd put on another excellent show – the same one he did on the Mexico Cruise in the Vista Lounge. 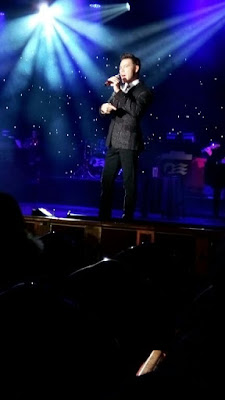 Included were: “Feeling Good”, “To Love You More”, “The Stars”,
“Impossible Dream”, “You Raise Me Up”, and a new addition, “The Prayer” with Princess Singer, Meghan Rayner. 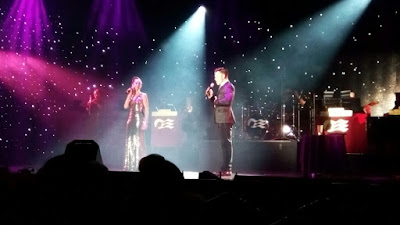 It was good but not the best ship version I have heard – the chorus seemed to be in a different key – just being picky.
From, there we finished off the evening with Steven Jaymes, who did his standard song list but threw in a few new selections.

I finished “Trace” – the killer turned out not to be as smart as I thought he would be – his motive was weak, and the ending was over quickly. A lot of buildup for a somewhat uneventful ending. I’ve got the next book in the series on my Kindle but I plan to read a different author first.