The first time we came to Ushuaia (years ago), we were lucky to run into warm (high 60s) weather.  Not so today - cloudy and chilly.  But nevertheless, it is very scenic.  Here's where we are. 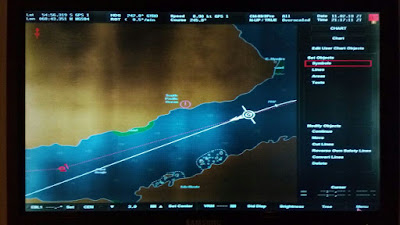 Ushuaia is a tender port and I got a nice view of the city and the surrounding area at breakfast. 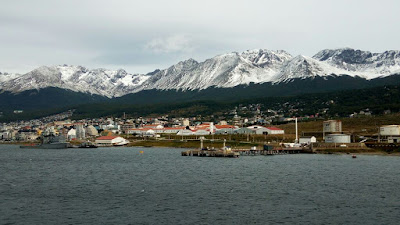 We are on an excursion today - "Beagle Channel by Catamaran" - which meets in the afternoon.  So in the morning, we are going to see a little bit of Ushuaia before rendezvousing with our guide and the guest.

Even though the water is a bit rough, the ride in was OK.  From the shore, we got some nice views of the Symphony in the harbor. 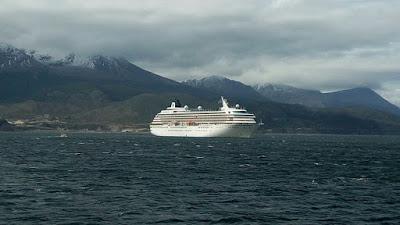 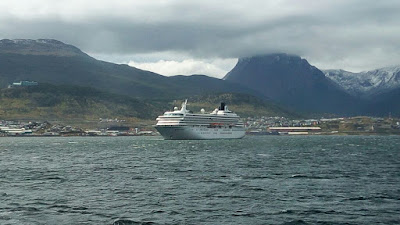 The town is about a 10 minute walk from the tender drop (and our pick up point for the catamaran).  There weren't a lot of folks walking around and we ducked into stores every so often to warm up.  The main street did have a lot of traffic, relatively speaking. 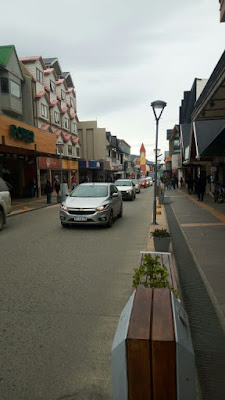 A sign told us exactly how far we have traveled since Buenos Aires.  I don't know where the other place on the sign is but it's a long way.  You can see how chilly it is. 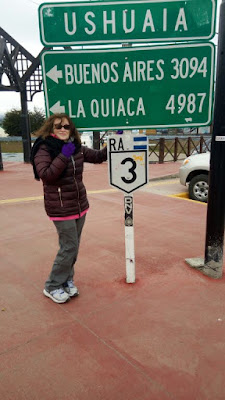 We continued our walk in the town - many of the shops were closed - and ran across an interesting Historical Garden (according to the marker). 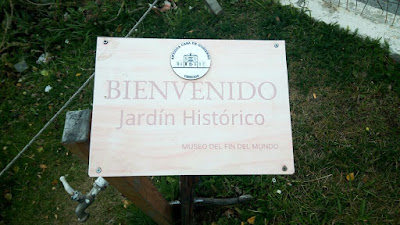 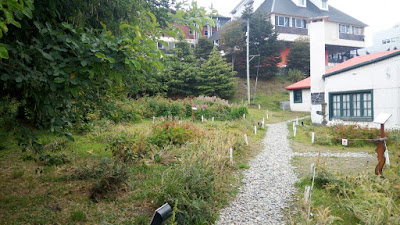 The garden wasn't much but I had to document it anyway.

Ellen wanted to check out some of the shops in the city center and dropped me at a coffee shop for something warm.  It took a little while to order the coffee - first of all there is no decaf in Ushuaia.  Secondly, I just wanted a simple coffee with milk.  With the help of a few of the folks behind the counter I finally got my coffee.  The coffee was 6 oz and cost me about $5 - the Starbucks of Ushuaia.  Even though this was a bonafide coffee shop, the seats were very uncomfortable.  I drank the coffee pretty quickly and went looking for Ellen.  We headed back to the pier area to meet our tour.

Years ago, we were on a catamaran, where we sat on the open bow hoping not to fall in the water.  This catamaran, the "Elizabette", is actually an enclosed ship with comfortable seating and tables. 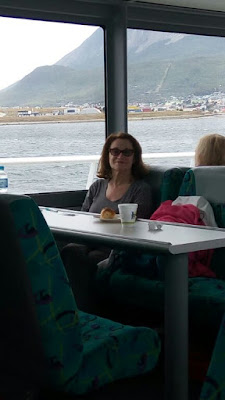 The ride was smooth and comfortable and headed out into the Beagle Channel.

I stepped out on the deck to get some pictures of the Beagle Channel. 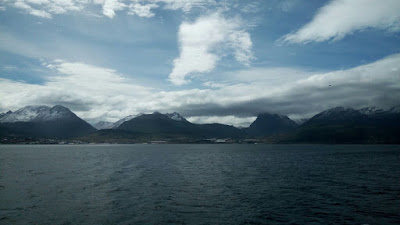 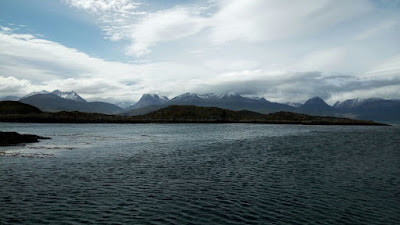 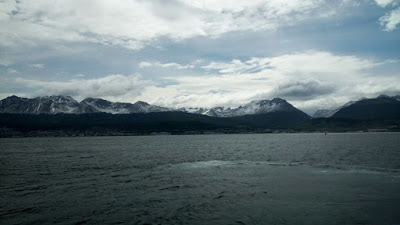 The boat approached an island that looked like it was populated by hundreds of penguins - actually, we were looking at cormorants. 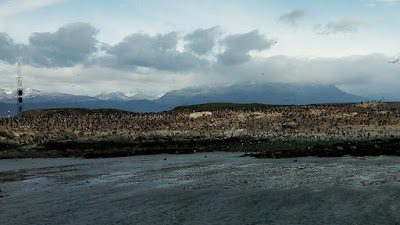 There was bird poop everywhere - it made the rocks look like they were made of light colored granite. 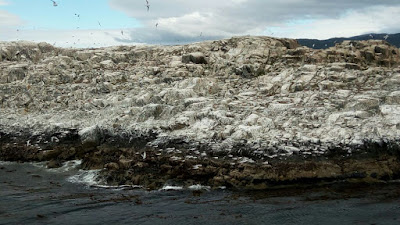 We visited Despa Island where there were Rocker Cormorants. 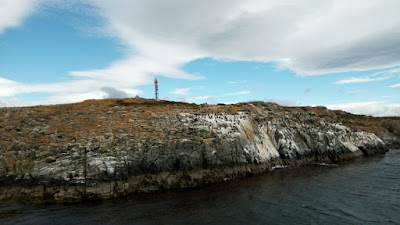 Another island was home to several sea lions. 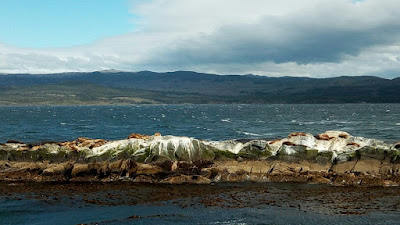 One of the more picturesque stops was a small island with a lighthouse - Les Eclaireurs Lighthouse. 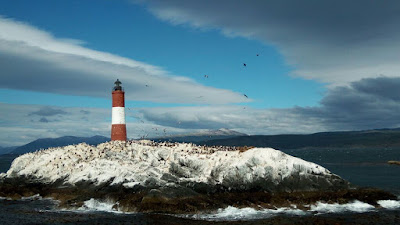 The name means "The Scouts" in French.  The lighthouse is about five nautical miles from Ushuaia.  The lighthouse, which is still operational, stands about 30 feet high.  As you might expect, it is the "lighthouse at the End of the World".

The final stop was Bridges Islands - home to indigenous people in the past and now an island with interesting vegetation and views.  Here is a picture of the Elizabette "docked" at the island. 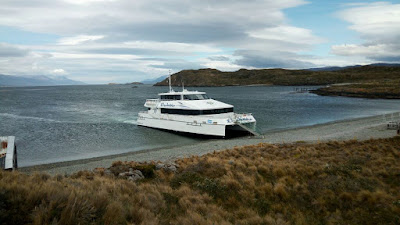 We got off the boat - really - and followed our guide up a path.  The following are pictures of our visit. 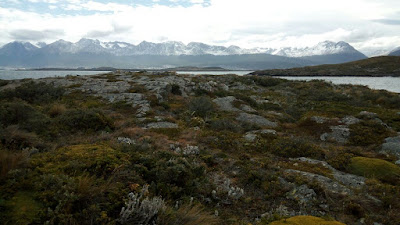 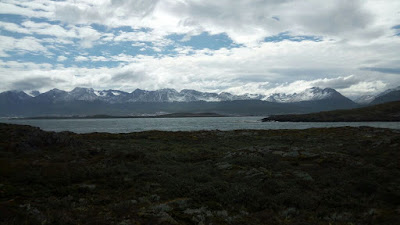 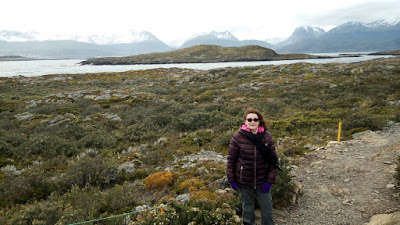 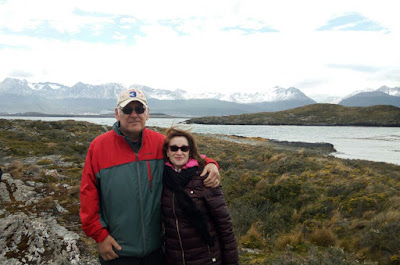 We then departed the Channel for Ushuaia and the tender port.  The ride back to the ship was short and soon we were back in the warm confines of Symphony.

After cleaning up after our trip, we watched the sail away from the Palm Court.  Just too windy and cold out on the open deck. 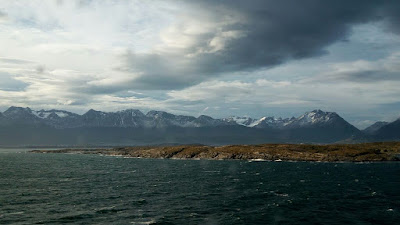 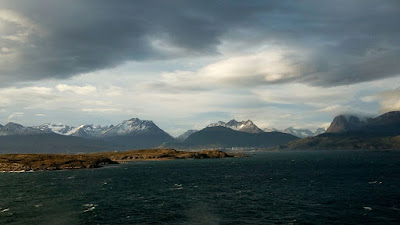 A picturesque and exhilarating day in the city ar the Bottom of the World.