Another beautiful day in South America.  Made even more beautiful because it is Ellen's Birthday.

That calls for another iconic photo on the deck

Today, we are in Puerto Madryn, Argentina. 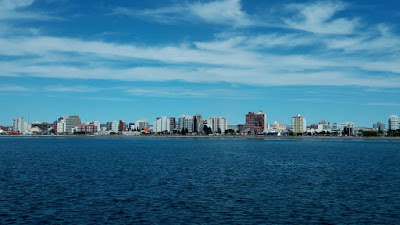 This city is known for two things in our history of traveling.  On our past visits, it has been incredibly hot (90s).  This resulted in the cancelling of excursions due a lack of air conditioned buses.  Also, our ship left two women here when they did not return to the ship in time for departure.

Today, we are not on an excursion (so once again, no penguins) but no matter because it is a gorgeous day and we are going to explore the small town.  Also, because my journal notes were lost, I am not sure whether the ship supplied a shuttle to the center of town.  However, looking at the pictures (with the ship way in the distance), I am assuming that transport was either provided or we paid for it. 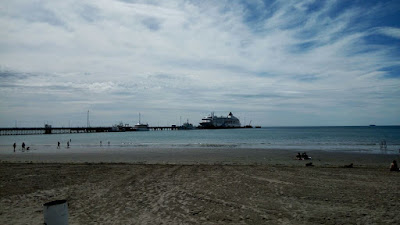 Near the drop point, we had to take a shot of a statue in the center of a traffic circle.  It was a whale's tale sticking out of the center of a circular platform.  I could only shoot it from across the street but it was still pretty amazing. 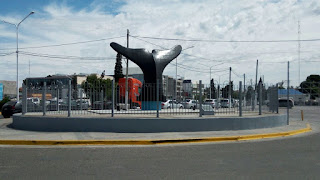 We decided to stick to the beach - I don't recall the beach area being so nice but it has been a few years since our last visit here.  The first thing to do is to get a panoramic shot or two of the beach and the Symphony in the distance as well as a nice photo of the beach. 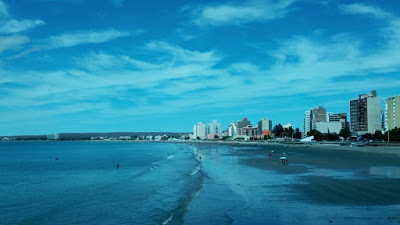 We continued our walk, checking out shops, and, as always, on the lookout for a nice spa for some pampering.  We did not find any spas on this route but no matter, the scenery was worth it.  Our next stop was a park with an impressive fountain.  There were a few children running through the water in the fountain (I waited until the people were gone to take the picture).  Yes, the ship always has to be in the picture. 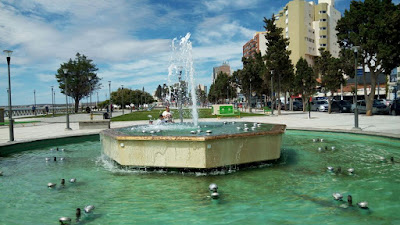 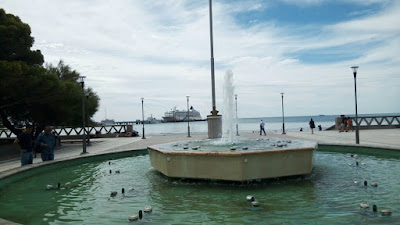 You can't see it here, but there was a woman selling ice cream or some kind of frozen treat from a cart.  She was drumming up business for a nearby store and was handing out free samples.  We are generally pretty cautious about eating anything off ship but we did try the ice cream.  The ice cream was great and the woman was friendly and wished us a good day. 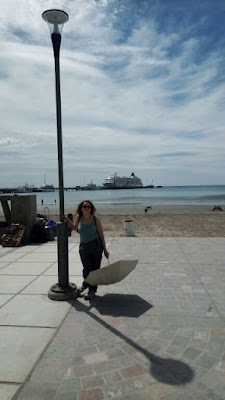 and we continued our walk.  A few blocks down, we came across a couple doing the tango in the street.  Now that's something you don't see at home. 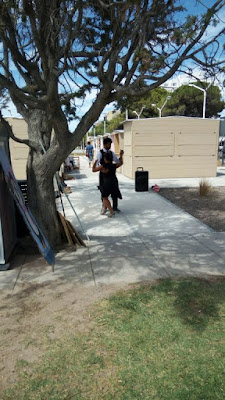 We decided that we had done our steps for the day and headed back to the ship.

As has been the pattern, we had a late lunch at Trident Grill and chilled out for the rest of the day,  A good spot to relax was the Crystal Cove on Deck 5.  The bar is close and the view is great. 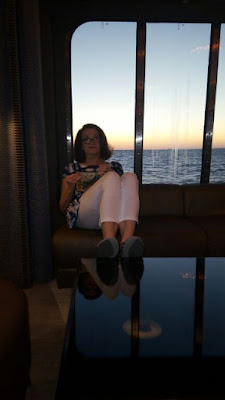 We went back out on the deck for the sail away - still nice and warm - to get one last picture of the birthday girl - this time the Sun was a supporting actor. 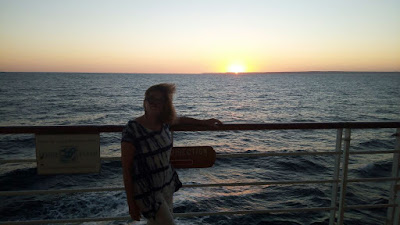 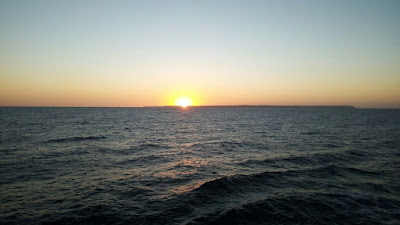 We still haven't seen the penguins but it was still a wonderful day in Puerto Madryn.