Port Information.  Our first port of call, Mazatlan, is the largest port between Los Angeles and the Panama Canal.  The city has a population of over 500,000 people.  The port authority supplied an open air tram that took us from the gangway to the small shopping center and terminal.  From the shopping area you can walk directly into the city and the city center. 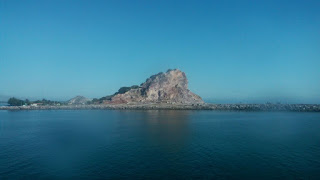 Mazatlan From the Ship

It is a short day in Mazatlan and most of the tours are very early in the morning.  No tours for today so, after breakfast, we walked to the center of town (30 minutes) by following a blue line in the middle of the road to our destination.  Also, Americans living in Mazatlan were working as tourist information guides – they were on almost every corner wearing special T-shirts.  You can’t get lost here.  It was a Sunday and a lot of the non-food shops were closed but there were plenty of locals around.

We were in Mazatlan a few years ago but we toured that day and didn’t get a chance to see the city center up close.  One site we stopped at back then was the Mazatlan Cathedral (1875-1890).  I remembered that it features a star of David in each of its 28 stained glass windows.  I asked our guide on that tour about the stars and she didn’t know their origin or significance.  Also, the last time we were here, there was a TV crew filming something in the church.  Pretty quiet today. 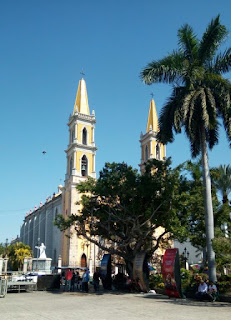 Across the street from the Cathedral is the Plaza Machado.  This is the highlight of the Historic District and a beautiful park.  There is some kind of music festival coming to town and there are lots of adverts around pushing the festival.  We found one of these in the form of an installation – a cat of some sort. 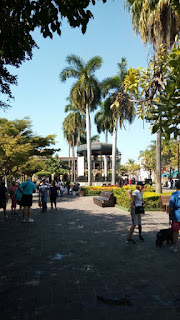 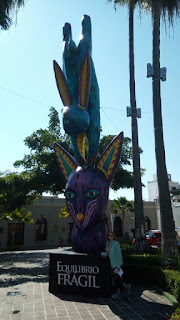 Beauty and the Cat

“Forensics and History: The Search for the Unknown Titanic Child” is scheduled for 3:00 PM (all aboard is 3:30 PM).  It is a tough time for a talk with passengers returning from shore and tours but the attendance peaked at about 240 or so attendees. 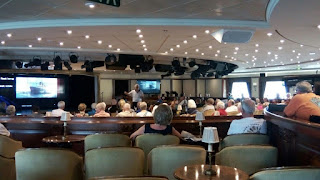 “Search for the Unknown Titanic Child”

After the talk, we spent some time on the open deck, where we also took some pictures of the sail away. 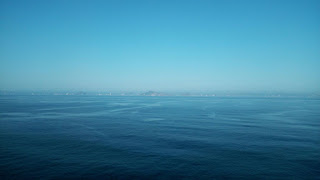 After dinner, we attended Showtime, featuring Comedian Brad Tassell (from Santa Claus Indiana).  He was a very funny guy.  Good to have a comedian as part of the entertainment schedule.
Posted by Hal T at 12:44 PM