A beautiful day in the city of Vermeer…

Fever dream sleep for me…

Breakfast was very good.  Available were:  Cold cereals, lox, eggs, crepes, Waldorf Salad, cheeses, jellies, and coffee and tea brought to your table.  The next time we are sailing out of Amsterdam, we are going to stay at the Leeuwenbrug Hotel in Delft and take the train in on embarkation day.

We checked out of our hotel, left our bags in the luggage storage area, and headed off for a second day of exploration – this time more awake and alert.

One of the things I wanted to do in Delft was to find the grave of Karl Wilhem Naundorff – most successful impostor of King Louis XVII (the Lost Dauphin of France).  No one in the hotel knew where the grave was and even a Google search by both me and the hotel clerk turned up nothing.

The only clues I had was that the grave was somewhere along the Oude Delft road and canal and that it was near a water tower (according to an internet blog post).  Our goal: Find that grave.

Today we had a clear plan for lunch – Subway.  There was a Subway right in the Markt Square so we ate our tuna subs al fresco in the Markt. 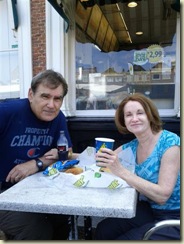 One factoid of note:  Cool Ranch Doritos in the Netherlands go by the alias of Cool American Doritos.  Perhaps “Ranch” is just too esoteric a term for the Dutch. 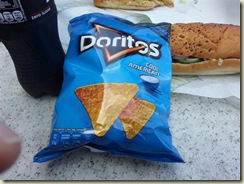 The glove prepared sandwiches were pretty good but the ambience made them all that much better.

Today is also Markt day so all the vendors were out selling their wares and food items.  There were plenty of food items out for tasting but we were simply not that adventurous – pre-cruise.

We spent about an hour perusing the Markt as well as the flower market.  The hotel manager told us that the heat would limit what we would see at both locations.  It seemed pretty crowded to me.

The Nieuwe Kerk is located on Markt Square 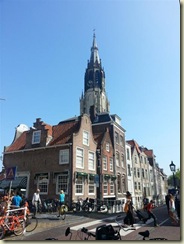 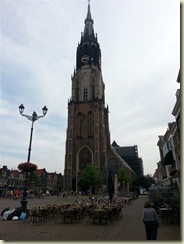 Also present in the Markt Square is the Town Hall 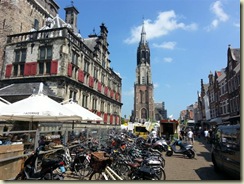 and a statue of Hugo Grotius, philosopher and jurist (and pigeon roost) 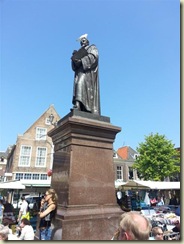 We headed for the Oude Kerk to check out the out of plumb tower.  We found it – we might have passed by it earlier but jet lag kept us from realizing what we were seeing.  The tower is about two meters off vertical, which is pretty dramatic. 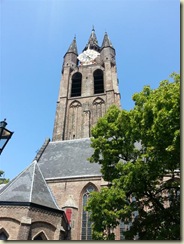 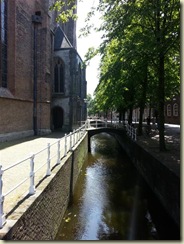 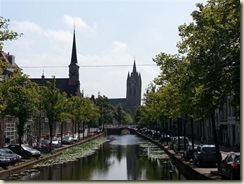 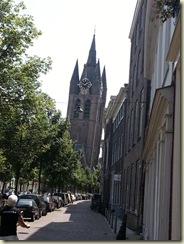 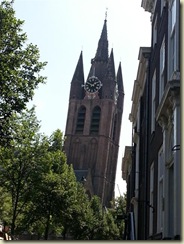 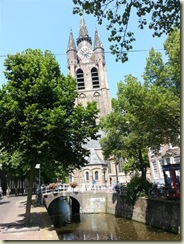 Oude Kerk and its vertical lean

A bonus of going to the Oude Kerk was stumbling on to the Oude Delft Canal.  As I looked down the length of the canal, I noticed an area of trees – maybe a park – in the distance.  There was nothing in the other direction on this canal so we headed for the trees.  At the end of the canal, there was a busy street and a water tower (the one in the blog). 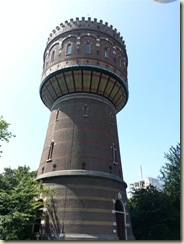 The park wasn’t much but around some bushes along a gravel road – not visible from the street – was the objective of our search:  The grave of Naundorff. 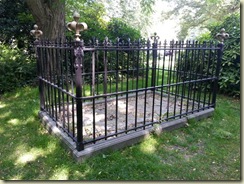 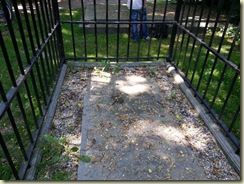 The grave had been neglected with an overgrowth of weeds and leaves covering the writing on the gravestone.  Ellen pulled some weeds and we convinced a local to move his bike so we could get some pictures of the grave.  Poor Karl Naundorff – going from being buried in the Oude Kerk to being moved (with great fanfare and in the presence of dignitaries) to this gravesite only to become a stone among the weeds. 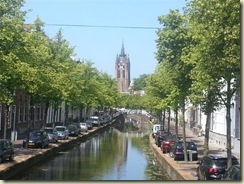 After our successful exploration, we returned to the hotel to retrieve our bags and headed to train station.  The walk seemed shorter this time.  We left in plenty of time to catch the train (according to my on-line schedules).

When we arrived, we found out that a train was about to depart for Amsterdam in three minutes (earlier than the train we planned on because this train was coming from a different place and connecting at Delft).  We caught it 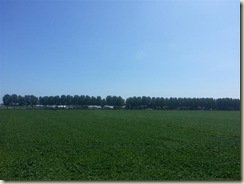 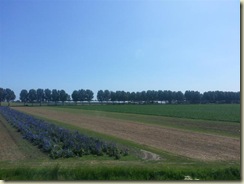 On our train to Amsterdam

and about 40 minutes later, we were in Amsterdam Centraal.  I should mention that no one checked our tickets on any of our train rides – perhaps they have a high tech monitoring system or maybe it’s all on the honor system).  Outside of Amsterdam Centraal, we quickly found Tram 9 (Artis Zoo) and we paid the 1.90 Euros/pp on the tram.  The ride – about 10 minutes - to the hotel took us through central Amsterdam including Dam Square.

The Parklane Hotel had changed our room to number 6 which meant another flight up (3rd floor – total narrow steps: 41).  I lugged both bags up the stairs – again no heart attack.  The room was bigger – the bathroom smaller – and the temperature stifling. The high tech fan was not a cooler.

Dinner was not at our usual restaurant but at the pizza place across the street (5.50 Euros for a Marguerita Pizza) plus 1.90 Euros per Coke Light.  I think I liked the other pizza better but we dined al fresco along the street.

After dinner, we walked toward the Nieuew Market area and shared a highly overpriced waffle (ungloved hand for food and gloved hand for money and cash register – what?).  We had to try it once.

A big day in both Delft and Amsterdam.

To tired to walk any more so back to the hotel to sweat away the rest of the evening.