No wanting to walk to far this morning, I checked out the breakfast in the Spa Café.  The menu has changed – no more egg white omelets made to order.  The oatmeal is different (contains apples and apple cider) and frittatas are now available.  The funky pastries and exotic jellies are gone.  I tried the oatmeal and some toast and brought a Frittata down for Ellen.

I went to Harry Murphy’s lecture on “Two Presidents Visit Berlin” in the Celebrity Theater.  His lectures contain a new type of PowerPoint animation with video and sound effects.

My first lecture - “The CSI Phenomenon” – was at 1:00 PM.  John introduced me and the crowd was relatively modest (Ellen counted about 140 passengers).  While small, the group was enthusiastic and some stayed behind to ask questions.  The AV on this ship is fantastic – the slides were crystal clear and the sound system worked perfectly. 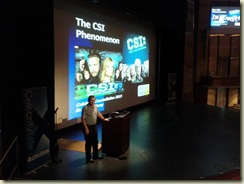 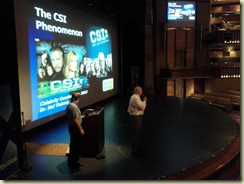 Many were fans and those that didn’t attend probably weren’t.  I was told there were 1600 English speaking passengers on board.  Maybe the word will get around.

After the talk, two people came up to chat – one was someone we knew from Northbrook days (Cheryl and David) and the other was Alan (and his wife), who I used to work with during my days at the Loma Linda VA Hospital back in the early 80s.  He played a little guessing game with me but after a day or so, I remembered him (a bit ironic since I did recall quite a few folks from those days).  Alan and his wife and we made some plans to meet for lunch on the sea day after Tallinn so we will have a chance to catch up.

As we checked out the musical acts on board, we spent some time listening to the Stylish Duo 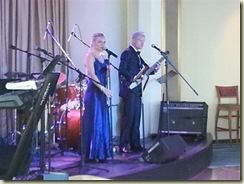 a brother-sister act from Sweden.  They seem to be favorites of the teen crowd but they sound good especially on the ballads.

The weather continued to be warm so a picture on the back deck was warranted. 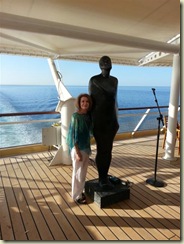 Back Deck and Local

We didn’t get dressed up for Formal Night tonight so we had dinner in the Ocean View Café.  I had the stir fry – made sure that the wok was not used for anything else by getting up there just as they opened.  The stir fry was good and Ellen had some fish grilled on the spot.  Pretty quiet up there tonight and the view of the ocean was great.

Tonight’s Showtime was the first production show - “iHollywood” – a tech heavy tribute to songs from the movies.  The singers and dancers were great.  I didn’t get any pictures because we were warned not to take a photos (not just flash photos).

There aren’t too many musical acts on board this cruise so we spent the rest of the evening up in the Reflection’s Lounge (Deck 11).  I am trying to finish “Thin Air” – the Spenser audio book I started last cruise.  I also started “The Girl who Kicked the Hornet’s Nest”, the third book of the Millennium Trilogy.

Tomorrow we are in Germany.