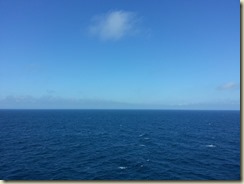 A nice breakfast in the Ocean View Café followed by R&R for the rest of the day.  The best place to be, of course, is in the temperature controlled Solarium. 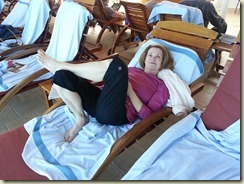 I knew from checking out the Celebrity Today last night that I would not be giving my fourth talk today.  Instead, I am scheduled for a Q and A Session at 3:00 PM in Michael’s Club.  I called Mark to make sure that AV had a mic in the room and he said all was set.

We had lunch in the Ocean View Café (did I mention that their tuna salad was quite good).

I decided to go Celebrity Theme Casual to the Q and A so I wore my “Celebrity Life” Tee along with my slacks to the session (I did not wear my Crocs although I was tempted).

My expectations for the turnout were low since similar Q and As on past cruises – Celebrity and other lines – have not been all that successful.  On one Celebrity Cruise, only two people showed up (at least they did have some questions to ask).

We headed to Michael’s Club about 10 minutes early (to check the AV and all).  When we turned the corner near Michael’s Club, we could see that the place had lots of people sitting around and chatting.  My first thought was that they had changed the venue for my Q and A and I had missed the telephone call.  I went in and it was clear that these folks were indeed here for the Q and A.

The place was full (Michael’s Club hold 90 people).  Some people were standing so Ellen called Mark to get some more chairs brought in.  I estimated the final attendance at just over 100 passengers. 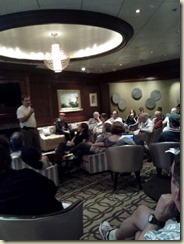 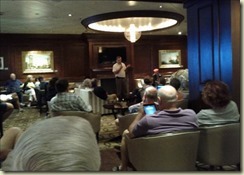 Q and A Session – Michael’s Club

I started things off with a very brief summary of what was in the final talk (Copernicus, Earthquake McGovern) and then asked for questions.  I got some very good questions including the anticipated ones on OJ Simpson, which led to a discussion of “Double Jeopardy” Laws.  The usual question about “Universal DNA Databases” came up and I gave my opinion about that.  A passenger wanted to know what type of Hemophilia Alexei Romanov had.  I wasn’t sure but we did discuss his situation and the transmission of that defective gene through the Royals of Europe.  The session ran past its allotted hour but nobody was in any hurry to leave.  When the questions and comments finally stopped, I thanked everyone for being a great audience.  Applause followed.  It was great.

I wanted to have one more dip in the Solarium Hot Pool (even though it meant packing semi-damp swim trunks).  After about an hour in the pool, we had a last dinner on board at the Ocean View Café – I had a very nice made-to-order pasta and Ellen had some freshly prepared fish and we both had an excellent view of the Baltic Sea.

Tonight’s show was a variety show featuring past performers.  We stayed for the Dizzy and Janna part and then went to the room to pack.  We also have an early transfer to Schipol in the morning and wanted to take it somewhat easy tonight.

Ellen is a great packer and both our bags were outside our cabin well before the 11 PM time.  In fact, they were both gone within a half hour of placing them there.