We are in Colon, Panama today.  It is not the nicest day but it is not raining and that is a plus.

There is some new construction going on in Colon including the new cruise terminal - Port Colon 2000, which will be down the road from the one in town.  There is also work being done on the huge Duty Free Zone Shopping area - still not open during the last two times we visited here. 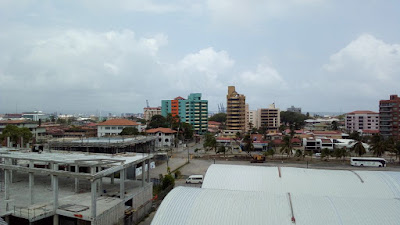 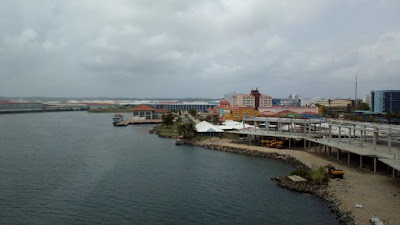 I had my usual nice breakfast in Terraces - trying the pancakes and eggs as a break from the waffles and cottage cheese - they are both good and the coffee continues to be good.

I am actually working later today but Ellen is on a tour - "Panama Canal Railway and the New Locks of the Panama Canal Expansion", which will last most of the day (scheduled for 6 hours).  It's a pricey tour and I decided to stay on board and catch up on my trip log and work on my lectures. We are going to stay in touch using our cell phones (we have texting and internet in Panama).  The good thing on this cruise is the gratis bottled water handed out before you get on your tours.  I hung out with Ellen in the Lounge until her tour was called.

From the pier, the tour boarded a bus for the short ride to the Colon Train Station, where the group embarked the iconic Panama Canal Railway.  The railway, constructed in 1855 before the Canal itself, is a throwback to the days of luxury train travel.  Comfortable seats and great viewing options. 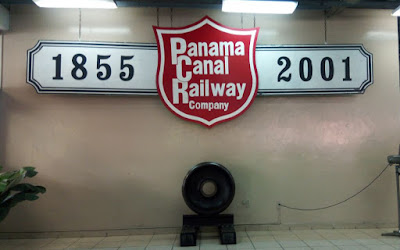 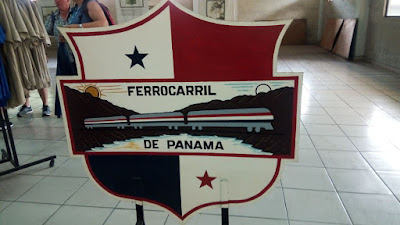 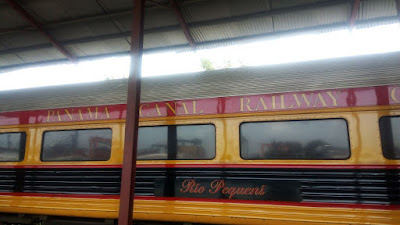 The train ride from the Atlantic Side of the Canal in Colon to the Pacific Side in Panama City took approximately one hour.  The major site along the way was Gatun Lake, the man made lake that flooded the area between the locks allowing ships to sail coast to coast.  Another site was the Museum of Biodiversity (Biomuseo) designed by famed architect, Frank Ghery (Pritzker Pavilion Millenium Park). 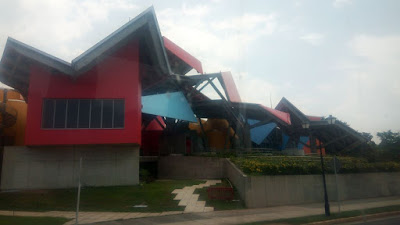 On the way to the Panama City Train Station, passengers got some nice views of Panama City and the tide levels.  At low tide, the foreground is simply a muddy field, which later will be filled with water.

As Ellen got off the train, she witnessed some kind of demonstration, which turned out to be a crowd participating in the local elections. 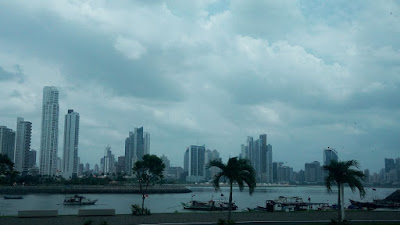 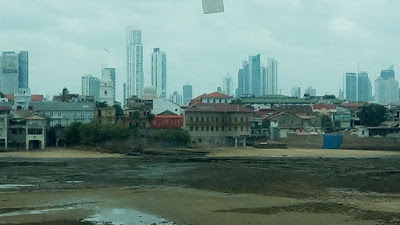 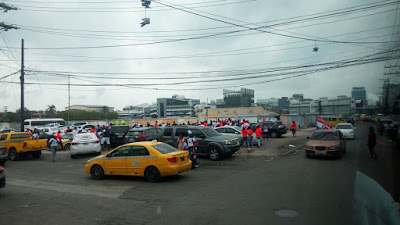 From the Panama City Station, the tour transferred to busses which took them to the Agua Clara Visitor Center.

On the way to the center, Ellen captured a picture of a statue of Vasco Nunez Balboa standing on a globe. Balboa, the Spanish Explorer, was the first person to see the Pacific Ocean - in 1513 - and named it such as it was calm (yeah, but we know better). 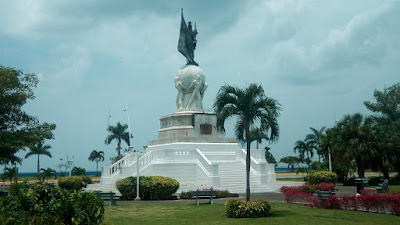 Agua Clara is the name of the new locks completed recently and designed to allow Super Panamax Ships to transit the canal.  From the visitor center, Ellen could see ships going through the locks. 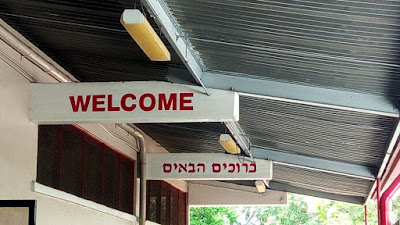 At the Visitor's Center, Ellen also got a picture of the monument to George Washington Goethals, the man who built the Canal for Teddy Roosevelt. 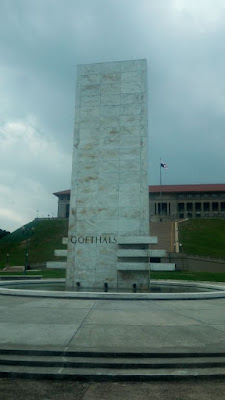 While Ellen was running from coast to coast, I was enjoying a nice coffee in Baristas and then a very different lunch in the Terraces Café.  The special on the buffet today was an "Impossible Burger", a veggie burger that is formulated to taste like the real thing.  I had one made for me (everything is made to order) and it was absolutely terrific, especially along with a coke, fries, and cole slaw. 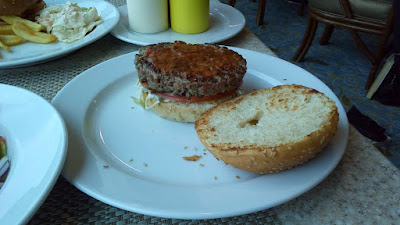 In the late afternoon, I got a text from Ellen that she would be arriving soon at the terminal.  I went up on Deck 5 to get a picture of her.  I did see her, part of a long queue trying to get back on the ship.  She, in turn, took a picture of me up on the deck. Nice. 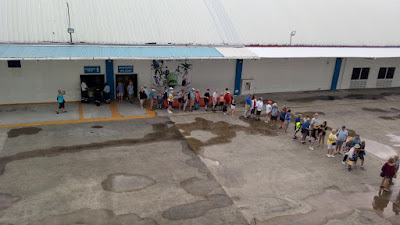 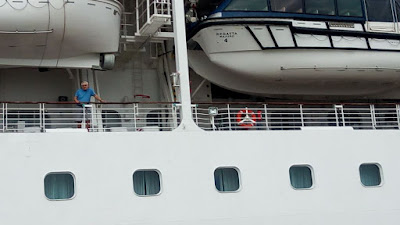 We took it easy the rest of the evening - dinner in Terraces - and some reading.