After some years, we are back in Acapulco, Mexico, and it is a postcard perfect day.

Ships have stayed away from Acapulco because of the lawlessness, including some involving tourists on excursions.  We are back here today and are scheduled to go on a half day tour this afternoon - "Historical Acapulco and Cliff Divers".  But the morning is ours.

The seas were smooth getting here and our room continues to be quiet.  I had a nice breakfast, once again, up in the Terraces Café and Ellen had room service.

Later in the morning, I went to Baristas for another tasty iced decaf mocha latte and did a little tinkering on my upcoming presentations.  I make very few changes, I just go through the talks to make sure the facts and examples are stored in my head for use later.  Reinforcement.

After lunch, we once again assembled in the Lounge for dispatch on our excursions.  Ellen and I are on the same tour but on different buses.  Today, we are not on large buses but on mini-buses.  I took the last seat in the bus (as I am technically supposed to) and that would prove prophetic.  The map of Acapulco shows the general area and some of the sites we are going to visit. 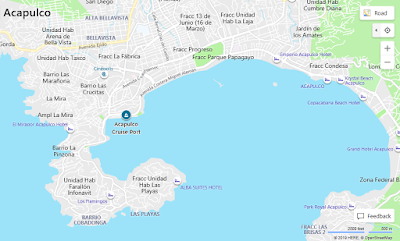 Our guide is Juan and his English is good. The bus is a little bouncy as we leave the cruise port and head to our first stop - "Fuerte de San Diego".  This fort, built by Spain in the 17th Century (and rebuilt in the 18th Century) was an important defensive installation protecting the Pacific Coast of Mexico.  Today, it is a museum. 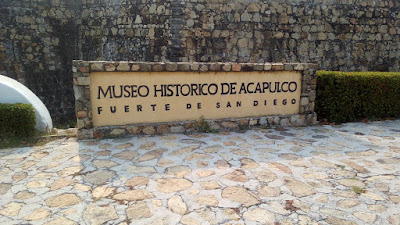 We have been here before but the exhibits are interesting and the grounds nice to walk around.  You can get a good view of the ship from the fort. 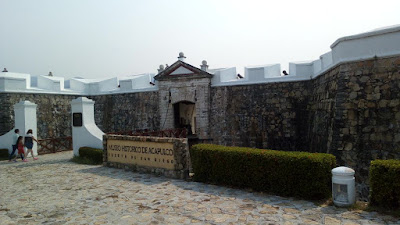 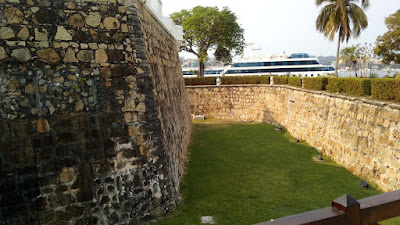 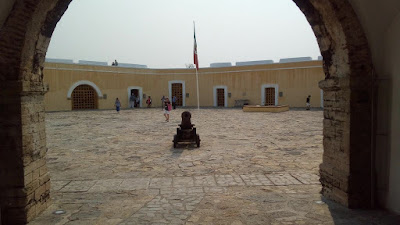 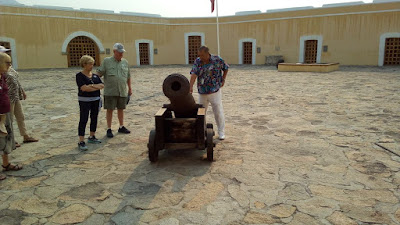 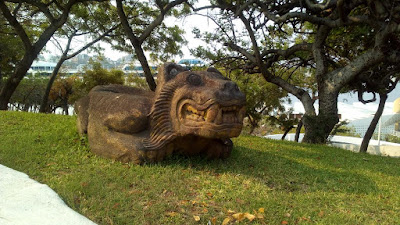 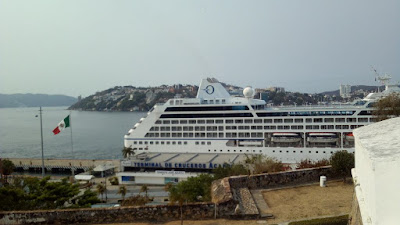 There was also some very interesting artwork (too good to be graffiti) on a wall in the Fort parking lot. 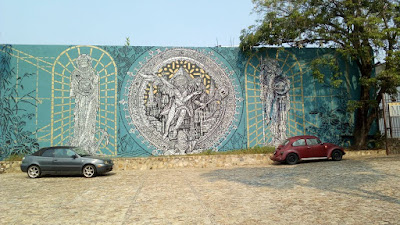 We spent about a hour at the fort, then re-boarded our mini-bus for our trip across the city of Acapulco. 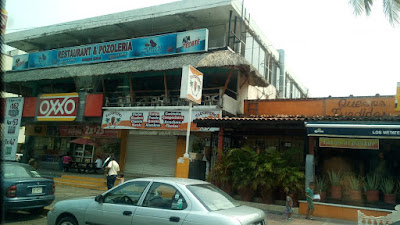 Acapulco is a little like Waikiki or Miami with streets lined with all types of hotels - fancy and ordinary.  There are lots of stores, bars, and restaurants, as well as some things you don't see every day.  One of these was a giant Coke bottle. 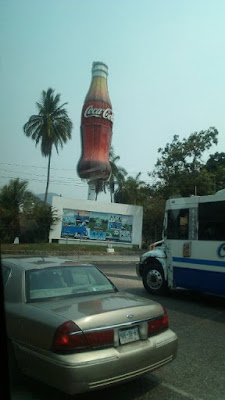 What wasn't so visible this visit was the strong military presence.  The last time we were here, we saw several trucks carrying armed Federales patrolling the streets.

As the mini-bus headed for the Capilla de la Paz (The Chapel of Peace), we hit several bumps in the road, made even more bumpier due to old shocks.  And here is where it happened!  We hit a major bump in the road and I was lifted off my seat and landed hard on my hip,  It hurt for a bit and I moved to another open seat to minimize any more bumps.  But when I got out of the car, my leg was aching - and the most likely explanation is that I reinjured my disc.  I'll be looking at ibuprofen later.

The Capilla is located on a hill and the bus parked at the bottom of the hill - passengers had to walk up the hill and then a series of stairs to get to the Chapel.  It was a tough walk for me but I kept up.  The Chapel is flanked on both sides by a huge cross some 130 feet high 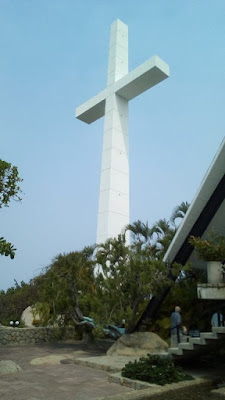 and a statue depicting intertwined hands. 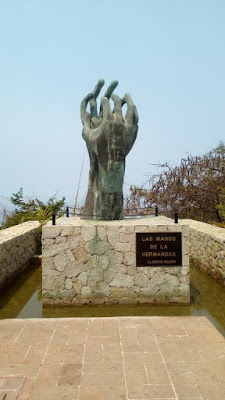 The hands represent two brothers (of a prominent local family) killed in an automobile accident and signify "brotherhood.  I didn't go into the chapel (I think they were holding services) but I did get some nice shots of the site and of the Bahia Acapulco, 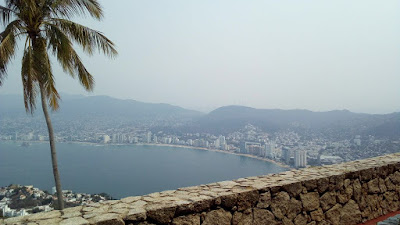 including a panoramic shot.

Our next stop was the Flamingo Hotel, made famous by owner, Johnny Weissmuller (Olympic swimmer and Tarzan).  The road leading to the hotel had roadside pictures of both American and Mexican movie stars. 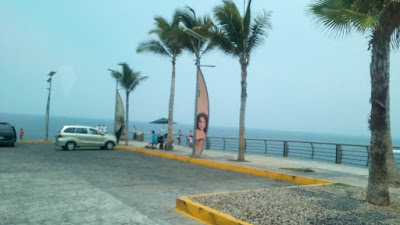 The hotel is not in the greatest shape these days but it is still charming and does offer spectacular views of the Pacific Ocean (even got a nice panoramic shot). 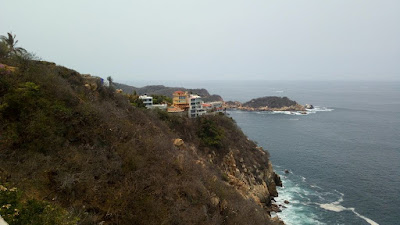 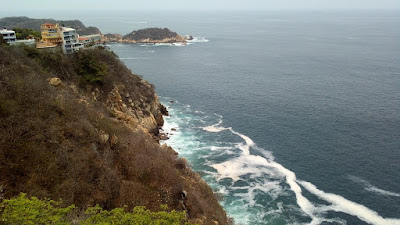 The photos on the hotel walls were also interesting - John Wayne and, of course, Johnny W. 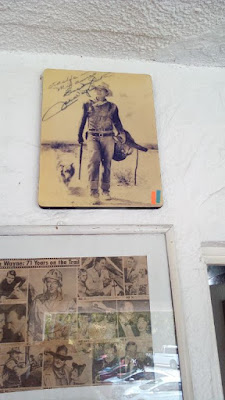 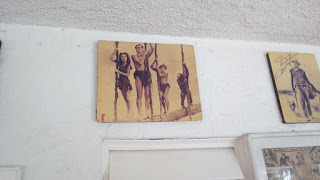 The passengers all spread out on the several patio areas to take in the view.  The stop also came with some well needed ice cold cerveza. 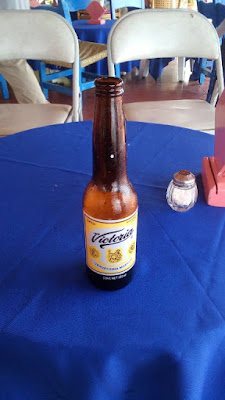 Victoria is fast becoming one of my favorite Mexican beers. The stop at the hotel was no more than 30 minutes.

Our final stop was at La Quebrada, where cliff divers have been risking life and limb since 1934.  We usually watch the divers from locations on one of the hotels overlooking the cliffs, but today we are in the public viewing area trying to get the best angle for a nice action shot. 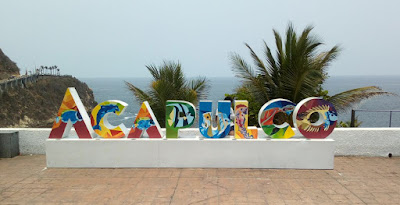 as well as the Acapulco "Walk of Fame".  I snapped a picture of Liz Taylor's star (yes, those are my shoes). 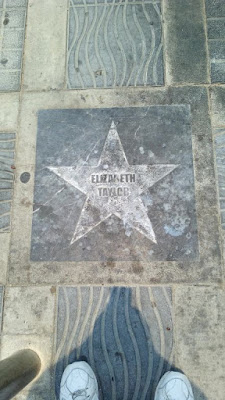 There is an interesting sculpture in the plaza area - seems like a nautical theme. 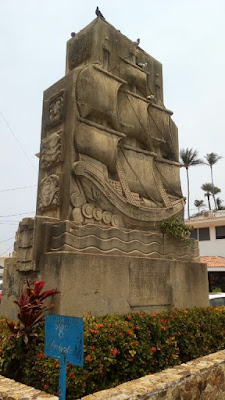 The divers are interesting to watch (we have seen them before) but the waiting until they dive is annoying - all of the waggling before they dive.  The divers don't get paid so they pander for tips from the crowd. 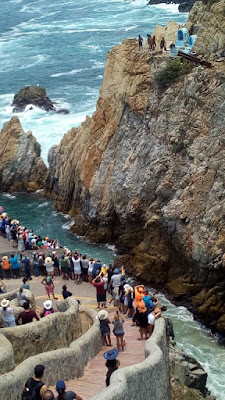 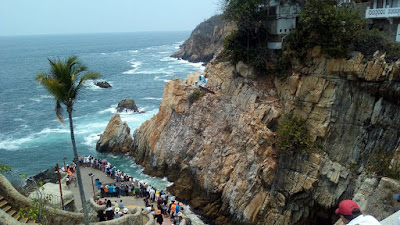 The bus headed back to the ship and once I got there, I popped a much needed ibuprofen and hoped for the best.

Dinner was up in the Terraces where I had another vegetarian pasta prepared for me.  The pastas are very good.  A Cesar Salad completed the delicious meal.

A nice afternoon in Acapulco.