Just a hop, skip, and a jump to Aruba… 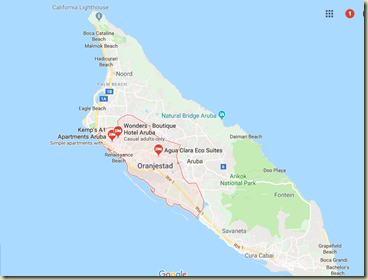 Port Information.  The island of Aruba was first inhabited by the ubiquitous Arawak Indians (called Caiquetios). They arrived about two millennia ago from Venezuela. The island was Spanish until 1636, when the Dutch arrived. Aruba is one of the islands making up the Netherland Antilles.  Oranjestad, the capital of Aruba (since 1797) and the Netherland Antilles, has a population of about 35,000 people. It has at least two casinos and a number of streets dotted with both the standard touristic stores but also with high end stores.

We have been in Aruba twice but the last time was eight years ago. The ship will be overnighting in Aruba on this itinerary, a first for us on a Celebrity ship.

We had originally purchased an excursion but cancelled it (we have seen the sights before) and decided instead to walk around the town.  The main shopping street (aside from the street abutting the pier) is Caya Betico Croes.

This street is about three streets in from the pier and must have a hundred different stores and restaurants. There is a trolley that runs along that street and some of the other streets in the town. We will know this for next time.

The city was having some kind of Art Festival and the streets were populated by the occasional ceramic blue horse and cow.  Ellen got to meet both of them.

The shopping area was also home to the Renaissance Mall.  A good place to get out of the heat and find facilities.

A little internet search identified a potential spa – Maggy’s Main Street – on that street. We found it and also had a coupon for a 10 percent discount (handed out on the street by Maggy’s husband). Maggy’s is located in a fancy perfume shop and looked real nice but they only had one therapist (Maggy) and the massages only lasted for 50 minutes and cost $60 dollars. So we decided to keep looking.

About two blocks away we came across Risbella’s Unisex Salon. They also had massages – at first they were 55 minutes for $60 but after some discussion (which was interesting since no one spoke any English) we agreed on one hour for $60. I went first and the massage therapist was very good but she spoke zero English – I am not sure what she spoke – might have been Spanish and Papiamento or something in between. We communicated through sign language and my minimal Spanish. She was nice and personable. The issue with the place was that it was hot and when I was finished, I was going to recommended that Ellen pass. She already decided that so we headed back to the ship for lunch.

We decided to go to the Oceanview Café for dinner. I had the pasta guy make me Spaghetti al Pesto (with assorted veggies). I found out that the veggies actually clashed with the pesto flavor. Still it was a pretty good dish.

We passed on the show tonight – flautist Gary Arbuthnot (he is talented and pleasant but we have seen him previously and just wanted a break from the theater).

Also, I had come up with a sore right hip (can’t blame an injury for this one) and the theater seats might make the ache worse. So I am going to battle this one with Advil and Aleve and nip it in the bud.

Instead, we spent the evening on the couches at the Oceanview Bar – Deck 14 Aft. A very comfortable spot and relatively quiet.