We purchased another early tour today – “Bonaire Highlights” – so we once again ordered room service.  The room service food continues to be good and it comes on time.

We departed from the Eclipse Theater on time at around 8:45 AM and squeezed into our mini-bus. This was pretty much the tightest seating I can remember on a tour and every seat in the bus was taken. Very uncomfortable for just about everyone. Our guide was Omar and he was one happy fella – he found humor in everything – nice.

Bonaire is a small island and very sparsely populated (approximately 19,000 people). It is almost a desert island completed with cacti and gets only 10 inches of rain annually. It is a major diving destination with dive shops dotting most of the island. The fact that it is a small island means that we don’t have to drive very far to get places.

Kralendijk is located on the Western side of the island – our tour proceeded south along the coast with our first stop being the Salt Ponds. Salt is still a commercial item in Bonaire and it is run by the major company, Cargill. 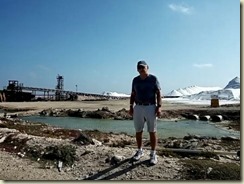 Wind and sun provide the conditions for salt to crystallize out of the trapped sea water. What you get are magnificent mountains of salt. The salt is then put on ships and sent for cleaning and processing. The ponds have a pink color to them – I thought it might be Halobacterium but the guide said it was due to pink mini shrimp. All along the beach are finely polished stones that resemble mini-cigars. These are not rocks but polished coral. We were told that it is illegal to take any coral off the beach.

Near the salt ponds are the huts occupied by slaves who worked at the salt ponds. The huts, which accommodate six people, were built in 1850. The huts have been renovated and now serve as monuments to another era.

The Huts are located on a stretch of beach that, from what we saw, does not get much in the way of visitors.  Still, it’s a beach and the Caribbean Sea is a light blue color.

From the slave huts, the bus headed North, past Kralendijk, and up the “hill” to a view point called Saru Largu (“Large Hill”). There is a Catholic monument at the top and from this point you can see Kralendijk, a lot of Bonaire, and the adjacent island of “Klein Bonaire”. Again, Bonaire is mostly a coral island and very flat. 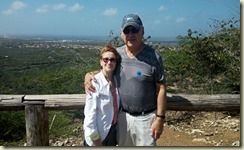 From Saru Largu we traveled back to the coast for the second half of our tour – Beach time at Coco Beach. Coco Beach is just about a 30 minute walk from town and a popular spot of water lovers. We were supposed to get a free lounge chair, which we did, but the most of the beach umbrellas were destroyed by wind. Today, the wind was really blowing resulting in more umbrellas biting the dust. 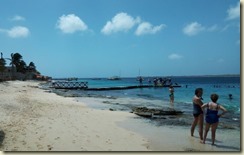 Ellen came up with a brilliant idea – get a drink at the bar and sit in the shade and wind free bar. A Coke Zero and a Desperados Red Beer ($3 and $5 dollars) bought us a comfortable seat with a view. My beer, which was indeed red was beer supplemented with tequila, cachaça (made from fermented sugar cane), and guarana (caffeine containing plant used in energy drinks). It had a very mellow sweet taste – it was really good.  Perhaps the best beer I’ve had in my cruise experience.

The Beer of Champions

We boarded our return bus at 12:45 PM and were back on the ship in a few minutes. The wind was really howling today and it was very difficult walking from the security check point on shore to the gangway.

We had lunch up in the Spa Café and are planning to go back out. We are docked at the South Pier today, which is a little further from the vendor market but also closer to come shops we did not see the last time we were here.

We went back out and checked out some of the shops – we found a spa and it said open but there was no answer when we knocked. This is the same spa we tried in December – also open but closed. The wind made it very difficult to walk so we gave up and went back to the ship, where we spent the afternoon in the Solarium.

Dinner was in the Dining Room – 416 is becoming our assigned table (thanks to Saara, our hostess). Tonight we ordered off the regular (salad and salmon and hake) and vegetarian (veggie spring roll and potato leek soup). Everything was good except the hake (which might make a good fish and chips type fish but not broiled). 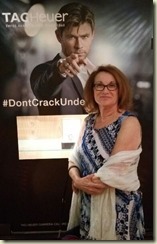 Ellen and the God of Thunder

The headliner tonight was Jeri Sager, a Broadway actress, who has been in a lot of major productions. She is a major belter with a wonderful voice and personality. She split time singing and telling stories about Broadway and herself (maybe to spare her voice as she really lets it all go when she sings). She did “I Dreamed a Dream” and “Memory” and a mini medley from “Evita” – “Hey There, Buenos Aires” and “Don’t Cry for Me, Argentina”. Her encore song was “Come to the Cabaret”. What a terrific performance and her only one on this voyage – shame.

A breezy but nice day in Bonaire.