Port Information.  Curacao is just 45 miles north of Venezuela – it is a volcanic island. Willemstad is both the capital of this island but also of the Netherland Antilles. It is a large city with a population of 135,000 people. The Queen Juliana Bridge and the Queen Emma Pontoon Bridge separate Willemstad into the Punda and Otrabanda neighborhoods. The currency is the Netherlands Antilles Gilder (NAF) and the current exchange rate is $0.56 per NAF.

I think the ship merely floated on the currents to get here. 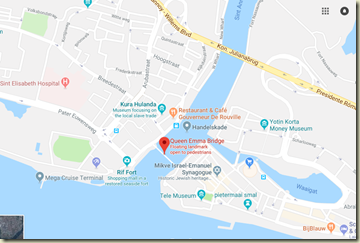 No tours today in Curacao.

In the morning, we plan to walk around the city. The ship is docked at the Mega Cruise Ship Terminal next to the Renaissance Hotel in Otrabanda.

View From the Pier 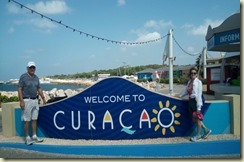 The Big Lady on the Pier

Trying to stay in the shade, we walked alongside the massive Renaissance Hotel, the Starbucks, and other fancy shops winding up at the floating Queen Emma Bridge.

Instead of crossing the bridge and walking though Punda, we decided stay on this side and to walk through the non-touristic Otrabanda.   The main street contained numerous clothing stores and restaurants. Because of the heat (seemed a lot warmer than the forecasted 81F) and lack of shade, we went back to the ship (with the help of a local, who walked us half the way back).

I tried something different for lunch today – I ordered a veggie burger from the Mast Grille on Deck 14. It takes 15 minutes to prepare so we went to the Oceanview Café for our salads. The veggie burger was pretty good (if not a bit contaminated – I told the cook not to use the same tongs) and my first French fries of the voyage were good.

We happened to catch the dancers rehearsing in the Atrium.

The afternoon was spent in the Solarium – I had some business to take care of with hotels.com and I managed to get it done via customer service chat session (I love chat). I tried to complete the electronic paperwork for an upcoming trip but that didn’t work as well using my phone. To get it done, we went off the ship to the vendor shops and used free Curacao Wi-Fi and my Kindle to get the paperwork completed and sent. While I was out there, I tried to load some more books on my Kindle but they weren’t available. The background music was overwhelming at the Wi-Fi spot so we hustled back to the ship and the quiet of the Solarium.

Tonight the Dining Room is offering Red Snapper. I tried that along with Pita and Spinach Dip, Mushroom Barley Soup, and a green salad with pears and apples. It was all good except for the snapper (which had to come plain because of the ham in the sauce – Ellen liked the snapper). I will know for next time.

After dinner, the singers and dancers put on a show in the Atrium – “Royal Rocks”.  Although I didn’t quite get the message of the show, it was entertaining and the staff worked hard.

Tonight’s headliner was Jesse Hamilton – a singer/actor known for playing Simba in the Lion King for six years (there are a lot of ex-Simbas on cruise ships). He had a very good voice (so different from his speaking voice) but, at times, the volume of his notes were ear splitting (literally). His medley of “Can You Feel the Love Tonight” and “The Circle of Life” were showstoppers.

Tomorrow, we are in our last port of call, Aruba.