A beautiful final day at Sea.

Another nice breakfast up in the Oceanview Café – the most consistently good meal of the day. Waffles, pancakes, scrambled cheese omelets – and great coffee.

I tidied up my final talk – “Forensic Detectives: Identifying America’s Fallen Heroes” - up in the Aqua Spa Café – my hip and back are still hurting (setting records for most Advil taken) so it’s a little difficult to find a comfortable position. I changed some things around for clarity.

The talk today is at 1:00 PM overlapping with a St. Patrick’s Day concert by flautist Gary Arbuthnot at 1:30 PM.  Again, the computer folks on the ship put together a cool advert for this talk.

The Oceanview Café is running a fancy buffet at Noon so we were there right when it opened. Once again, fish and chips were on the menu and this time they were a little more done and very good. We ate quickly and I ran down to the room to get ready.

My audience was pretty good considering the timing and competition – about 90 plus full – some empty seats on the side in the front. The audience is very engaged and there are about 10 veterans present. I also found out that about 90 percent of this audience had attended all five programs. The talk ran about 50 minutes and I got a mid-talk round of applause when I finished the Vietnam Unknown Soldier segment.

All in all, a very successful lecture series – I really like Celebrity Central. Again, my main competition was the wonderful weather all cruise long.  When I would go up to breakfast at 7 AM, Deck 14 was already basically full of people. Deck 12, the pool deck, was filling up and the sun had barely come up. This was a very Sun loving bunch. If I weren’t speaking, I would be outside – not in the sun but in the sweet and clean ocean air.

I finished “The Forgotten Room” while trying to get comfortable in the Solarium. The plot turned out to be pretty confusing in the end and they killed off one of my favorite characters. Not Lincoln Childs’ best effort but I will give him another chance.

Got some pictures of the calm seas from the open deck.

Also, I think that there was another cruise ship out there.

No cruise would be complete without the iconic Ellen on Deck picture. 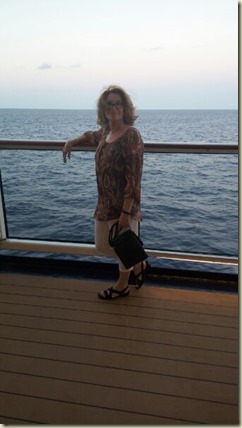 The Party Band was performing on the pool deck.  Worth a picture.

We changed for dinner and decided to have dinner up in the Oceanview Café. I had Pasta Oglio prepared by the pasta station and a really good mixed salad. Garbanzo beans have been available this whole cruise as have Chinese noodles. The salads have really been a pleasant surprise.

We sat in the balcony for the final Production Show – “Euphoria” – a Cirque type show involving mostly acrobats and flyers. Only a couple of singers backed up the acrobatic numbers. The volume and type of music eventually got to us (even though the show was unique and well produced) so we went looking for a quieter spot.

We found some nice seats on Deck 4 atrium, where the party band, “Back Before Sunset” was playing. I again feel bad that I didn’t discover this band early on the cruise. I really like the lead singer and how she moves around when she sings. 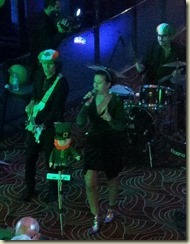 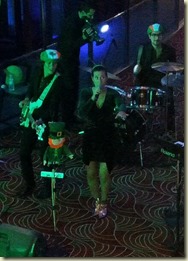 Party Band in the Atrium

We listened to their set and then stayed for the performance by the Passenger Choir. Conducted by singer Caleb and supported by singer Christine,

the choir did “Can’t Help Falling in Love with You” and “Imagine”. Following the choir, a flash mob broke out and they were really terrific – the lead dancer, I guess a passenger, was fantastic and obviously had some kind of dance training – she was burning up the floor.

Flash Mob Takes Over the Atrium

We went to the room to make sure we had everything ready for tomorrow – this involved a last minute visit to Guest Relations to straighten out some items.