The Ides of March in Aruba

Hip and all, I was able to get some sleep.

After the usual breakfast, we are planning to go back into town and find the two spas we saw yesterday. Ellen is going to go to Maggy’s and I am headed back to Risbella’s Salon. I texted Maggy and told her we were coming and she was ready for Ellen.  Global Texting and Internet – a nice perk from my carrier.

It turns out the hip does not bother me when I walk – only when I sit and get up. So it was no problem walking into town.  In the terminal, I got into a picture with what I assumed to be some kind of mascot.

We also found a different kind of Aruba sign.  This one looked moveable.

We stopped first at Risbella – the door was locked even though the OPEN sign was out. They soon answered the knock and tech recognized me (I think) and we still had to communicate via sign language and pointing.  it was a good massage and I put both spas into my contacts for future reference (who knows when we will be back in this neck of the woods again).

Before we returned to the ship, I picked up an Aruba baseball cap at a good price.

After lunch, we spent the afternoon in the Solarium – I am making progress on “The Forgotten Room”, which is turning out to be a ghost story (not my favorite but I an waiting for a twist).

Before dinner, we watched the sail away.  There were some very interesting sandbars jutting out from the mainland.  Since we had internet from the shore, I tracked our sail away on Google Maps. 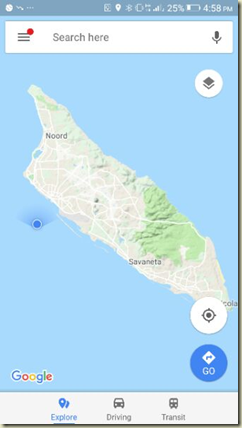 The ship also sailed by the Reina Beatrix International Airport.

After checking out the menu items in the Dining Room, we had dinner up in the buffet – this time I had the pasta pesto sans veggies – it was much better that way.  The pasta station is one of the best features of the Oceanview Café.

Eddy had called earlier and asked me to participate in the game show “The Chase is On” (based on a British TV Show) at 8:00 PM – I reluctantly agreed not even knowing how this trivia game works. There was actually a good turnout. The point of the game is: Audience members compete with “Chasers” to see who can get more correct trivia answers in one minute. I was one of the chasers along with Eddy and someone from Shorex. I wound up going first – my opponent got nine. I also got nine including some answers that just came to me. I missed a few easy ones but that 9 was the most correct answers of the evening. It was harder that it looked – I’m never good on a timer but it was fun.  Oh yes, a tie goes to the passenger, who got some Eclipse goody – so everyone wins.

The Chase is On

At 9:00 PM, we went to see the show. The Headliner tonight was Dan Wilson, comedian. He was an all out hoot – I thought everything he said was funny. It’s too bad he can’t have a second show. The audience loved him.