We are scheduled for a 9:45 AM disembarkation so we were able to get a leisurely breakfast up in the Lido Café.

We lugged our bags down the pier where we would catch our Uber ride. The ride from the pier to the Indigo Inn costs $6.29 (and I added a tip of $1) for the short ride (0.48 miles). We might have been able to walk there but the sidewalks are very uneven and we have one larger suitcase.

Check-in at the Indigo Inn was fast and easy but we were told our room wasn’t ready yet and the clerk would store our bags. Then she told us another room was indeed ready – it was by the elevator so we checked it out. The elevator was actually on another wall of the building so we took the room (Room 200).

The Indigo Inn is configured with rooms surrounding a huge courtyard (very New Orleans).  There are some leafless trees and a fountain – probably looks very nice in the Summer.

The room was like a time machine – there was read toile wallpaper on all the walls and matching toile bedding.

The bed was a bit uncomfortable (it has a metal trim on the mattress, which you have to vault over to get on the bed.

Our plan for today was to walk through downtown Charleston, revisit some of the places we saw on our last trip here recently. We also had a goal of doing some shopping at the Walgreens at the corner of Calhoun and King Street. We also wanted to find a nice local eatery for lunch (no Subway today).

Our first stop would be the Charleston Market, which was just a few blocks from the hotel.

The mall is a tunnel like structure stretching for about five blocks. There are vendors of all type selling stuff. You cross streets between the various block sections of the Market. We bought nothing.

Emerging from the mall, we thought about going into the “Museum of the Confederacy”, which was right there. It looked like a very small place and it had a charge so we opted out. We instead headed toward Francis Marion (“Swamp Fox”) Park to see the Holocaust Memorial we zipped by on our ship’s tour (and that we missed completely when we were here earlier).

The Memorial consists of several components – there is a court surrounded by a metal fence – in the center of the court was what I thought was a large blanket (used by homeless folks). On closer examination, the blanket was a tallit made of metal. The tallit was missing one of its fringes signifying the loss of life during the holocaust. Another part of the Memorial was a low wall containing the names of all of the death camps as well as a plaque of Charleston residents who lost people in the Holocausts. It was a very striking Memorial but it needed some ongoing upkeep.

We picked up our stuff at Walgreens and then looked for a place to get some lunch. I Googled restaurants in the area and came up with a pizza place called Monza. We found the restaurant but the prices for pizza was very pricey. We decided to keep looking. While we were at Monza, we took a picture of the American Theater, which was featured in the film, “The Notebook”. 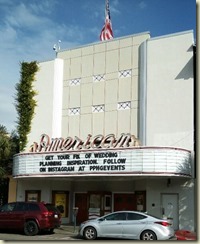 Theater in the Film – “The Notebook”

As we walked back down King Street, we came upon a restaurant called “Juanita Greenberg’s Nacho Royale”. We ordered a veggie burrito and a veggie quesadilla. While it was a very unusual burrito is was OK and the refills on unsweetened tea were free. The next time we are here, we will find other places. What did make this place unusual was the Chanukah menorah on the counter with all eight candles in place.

After lunch, we continued to walk around the Francis Marion Park area.  We, of course. saw the typical Charleston architecture.

It was still Chanukah and Charleston had banners on their streetlights

and what looked like a Menorah at one end of Marion Park.  That was a bit unusual and amazing.

We continued down King Street checking out the fancy stores and eateries.We made an interesting choice for dinner – I would use my texted Subway Coupon to buy a tuna sub, which we would split. Ellen managed to convince the sub maker to put another scoop of tuna on our subs. We carried them back to our hotel.

The rest of the evening was spent in our Indigo toile bedroom. While we worried about the elevator, the biggest problem was our very noisy and inconsiderate neighbors, who thought they were the only people staying at the hotel. In addition, the woman in the group coughed all evening. We could only hope that they would quiet down later.