For reasons unexplained, our noisy and coughy neighbors took the night off from their racket making and there’s a chance we got a little sleep on our toile bed.

The special on the breakfast buffet today was biscuits with ham and cheese (very Southern) – the clerk managed to get me four plain biscuits so I was set. There were no waffles but there were lots of cereals and sweet rolls and some bagels. Not a great breakfast but we wouldn’t starve. We took some extra bagels and cream cheese for the plane rides.

I called an Uber for our ride to Charleston International Airport (CHS). Uber is a funny thing – I set up a ride and then decided to wait a bit – when I actually set it up, the price had dropped $2. Our ride to the airport cost $18 (plus a tip of $3 for coming on time). The airport is about 30 minutes outside of town. Still a pretty good size airport.

AA5041 is scheduled to depart at 11:08 AM and we had about 30 minutes before boarding. When I got the check-in prompt for our flights I checked out the seat availability and noticed that the exit rows on both of our flights this morning were now free (happens every so often near flight dates). I changed both sets of seats to exit rows so leg room, a non-issue. 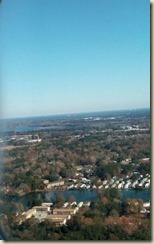 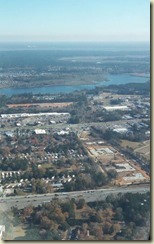 Our first flight to Charlotte, NC was short – 38 minutes – and on a very comfortable CRJ-9 regional jet. No drink service – no plugs. The plane looked new. The flight was smooth – basically up and down.

Flight 2 – AA2066 (A321) – departed CLT at 1:06 PM – we did get drinks on this one and also had our lunch courtesy of the Indigo Inn. The flight was smooth and our final approach to LGA was cool – the plane came in on a low bank – I could see land on the port side and sky on the starboard side – at the last minute, the plane leveled off and all I could see was water (seemed like we were just about 50 feet over water. Then land appeared and we touched down. Neat.

There was some confusion about the carousel our bags would be on so, after waiting for a half hour, an airport employee told us the bags would be coming off another carousel. The plan was full and a lot of passengers were trying to get close enough to get their bags (on a short carousel belt). I saw our bags and nearly pulled something trying to get the big bag off the belt (as other bags tried to push it away).

We were told that Uber picked people up at Area 11B (a short shuttle ride from the terminal). I set up an Uber ride but when we got to the pickup spot, the app told me the driver cancelled (I tried to call the driver several times with no answer). I then received a receipt from Uber for $5 for cancelling my ride. I called another Uber and this one showed up. While in the car, I wrote to Uber complaining about the first ride and got a $5 credit on my next ride. We were now in an Uber Pool car heading for our hotel in Brooklyn. The app did not show any other pickup scheduled. About a half hour into the ride, the app said we would pick up Andrea (on our way). About an hour plus into our ride, we got Andrea and as a bonus, her boyfriend. We were in a Prius and it does not fit three adults in the back seat. Ellen couldn’t fasten her seat belt and Andrea’s boyfriend could practice better hygiene. The overall 90 minute ride seems twice as long. I again wrote to Uber for allowing this unsafe situation – another five dollar credit. I will no doubt have to straighten out all of these Uber charges when I get home. We finally got to our hotel in Brooklyn – La Quinta Inn and Suites, Brooklyn Downtown. The Uber bill was $46.18 (no tip this time).

The Hotel was a modern building in a non-so modern neighborhood. The hotel looked new and Euro modern but deferred maintenance said otherwise. However, the bed was huge and comfortable and the shower and bathroom a good size. It also seemed quiet.

We were hungry but decided not to venture out. We wound up, after calling some places, that we would order in from Dominoes. We ordered the special (two medium pizzas plus garlic crunchies – I had a salad.) – it turned out to be much too much food and we only ate half the pizzas (the salad turned out to be really fresh and good). The food was delivered by bike. At least we wouldn’t be hungry.