We are scheduled to arrive in San Juan at around 11:00AM so we can have a leisurely breakfast – like being at sea for the morning.

We are very interested in how San Juan is doing since being flattened by Hurricane Maria last year.  Most of the island still has no electricity or water.

The sail in, as always, was spectacular. There are several ships here today – Sea Dream II, Windstar Wind Pride, the Viking Sea (not as impressive as I thought it would be), the Adventure OTS, and the Azamara Quest.

We documented the docking of the ship.

We did pretty much nothing all day but each lunch (including a coke float this time round), 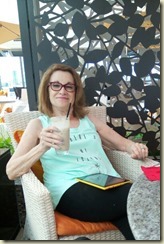 and sit on the balcony (until the Sun drove us into our room). From our vantage point, we could not tell what Hurricane Maria did to San Juan and Puerto Rico. As it got toward the end of the day, we could see some lights go on (including those on the runway at the nearby regional airport) so some power was available to the city. Our mobile phones were also hooked into the city’s 4GLTE network – so somethings were getting back to normal. The situation in the interior of the island and in some of the more remote areas must still be a mess.

I got a call from Valentina indicating that my talk tomorrow would be at 10:00 AM in the Galaxy Lounge (not 1:30 PM in the Hollywood Theater).

We had dinner in the Dining Room – I tried the kosher steak again (much better this time) with baked potato and margarine and Ellen had the lamb chops (good but only two of them). Sherbet for dessert along with decaf coffee and soy milk.

The sail out from San Juan took place until gray skies.

The headliner tonight was Salvatore Hasard – a multi-instrumentalist and vocalist. His backup music was really amped up so we had to flee to the back of the theater to get out of the vibration zone. He was great when he was on the piano but his electric guitar was ear blowing. A very entertaining act but a little too loud this evening.

We looked for some quiet time in the Palm Court and on our balcony.