The hotel was quiet again so we were able to get some sleep and start to neutralize the nasty jet lag.  I am starting to feel things getting back to normal.  It’s a sunny day outside, which helps smooth out the lag.

The breakfast buffet was pretty much the same this morning and I had exactly the same items – the scrambled eggs were a little more done so they were better and the dry cereal (might be a Croatian version of Special K) was also good eaten along with the somewhat warm milk.  You get your coffee at one of those automated barista machines (I usually get the Café au Lait but still have to dilute it with hot water).  The bread is very good and seems fresh.  Actually, the food is very good at this hotel and breakfast is not a noisy crunch.   I never got a chance to try out the room’s mini-shower (planning to take a shower on the ship before dinner).

We checked out of the hotel around 11:30 AM and had to pay only the resort tax and the bottle water (20 kn per bottle).

We crossed the street in front of the hotel and went through the pier entrance to reach the ship (it was good to see Queen Elizabeth docked this morning).  At first , we thought there was no one guarding the pier access but just as we were about to go through the doors a Croatian cop appeared and took our passports.  He scanned them, asked us a few questions, and let us go to the ship. JITC – “Just in Time Security”.

We showed our joining papers to the security guard at the gangway and, without really looking at them, he called someone (after many no-answers) to come and deal with us.  After a few minutes, a woman showed up with our sea pass cards and information.  She took our passports with her and we made our way to our stateroom. 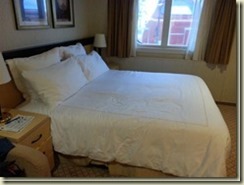 This is where almost all the guest entertainers are berthed.  Although we have an outside cabin, it is only so because it has a window.  Beyond that, we have a lovely view of several lifeboats.  From the bed, we can see clouds in the sky.  On the plus side, the room is spacious with a nice bathroom and standard toilet.  The beds had not yet been turned into a queen so they had separate sheets and tended to move apart.  Our steward, Leo, said he would fix the beds for tomorrow night.

We had lunch up in the Lido Café (Deck 9).  I had the chef make me a pizza (with tomatoes and onions) and along with a salad, that did the trick (I can only finish about three slices even when hungry).  Apparently, they can’t make smaller pizzas (for one) so half the pizza will be uneaten.

I received my lecture schedule in my boarding envelope and it indicated that I would only be giving four presentations.  I called the Communications Department to make sure that the correct four (out of the original six) would appear on the schedule (gone are the Pharaohs and Forensics and TV).

I also had to meet with the Production Department to go over the safety training for speakers (that would be the first time I’ve had to do that).  I found out where all of the phones and fire extinguishers are backstage.

We met Chris Thompson, Assistant Entertainment Manager, at 4:30 PM near the Purser’s Desk to go through our lifeboat drill and training.  It was a short meeting.

As we expected, the Maître D’ told us that there were no tables available for early seating and that late seating would involve sharing a table for six.  Looks like we will be in the Lido for this cruise.

We watched the sail away from the open deck 3.  We also got a view of the Franjo Tudjman Suspension Bridge. 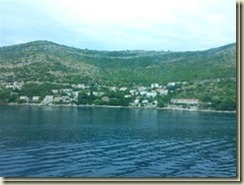 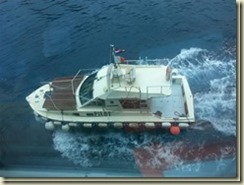 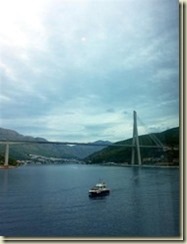 We went to the early show (8:30 PM) for Showtime in the Royal Court Theater.  The headliners tonight were “The Sirens” – a duet – one British Woman and one Scottish Woman.  We actually ran into them and exchanged “hellos” as we were both leaving our cabins on Deck 4.  One was in her curlers (a great disguise).  I guess we are neighbors.

They were very entertaining. 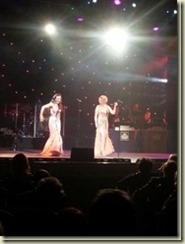 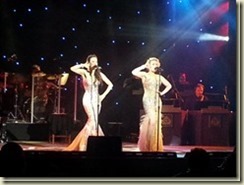 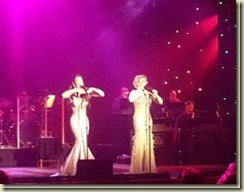 The room was noisy due to its location above the Queen’s Room.  Earplugs and the fact that they stopped just after midnight were the solution.