Another beautiful day sailing in the warm and sunny Mediterranean Sea… 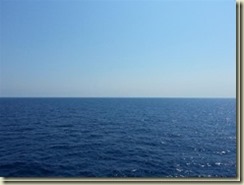 Another bonus – not working today.  A whole day to ourselves and it’s still warm outside.  It’s a day or deck sitting, deck walking, and reading.  Exactly what a warm weather cruise ought to be.

The usual breakfasts and lunches – all good.  The pancakes continue to be good and the cottage cheese has yet to disappear from the breakfast buffet.

There was very little on the dinner buffet (the made to order pastas also did not work for us).  The chef suggested making a pasta with cheese sauce (aka Fettuccini Alfredo).  It turned out to be one of the best pastas yet (I told him that making the pasta dry – stirring it in with the sauce with out first dunking it in the water – would make for a thicker, better pasta).  A great dish.

After dinner, we went up to the Commodore Room – Deck 9 Forward – to read and relax.  We were treated to an amazing sunset (but, no green flash). 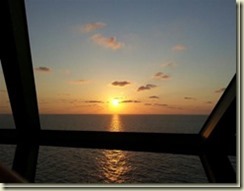 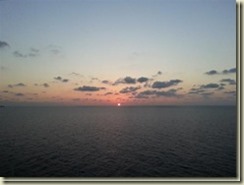 We decided a little too late to attend Showtime tonight - Acrobats – Alan and Yulia, who are former Russian Gymnasts. Yulia was an Olympic rhythmic gymnast.  By the time we arrived, there were no seats in the theater. We’ve seen a lot of acts do similar things and didn’t expect the show to be full.  Yulia was a least six feet tall and her costumes seemed like they were spray painted on.

We tried to see some of the show from the tunnel entrance to the theater.  I also tried to snap a few pictures but was “accosted” by what appeared to be a “GRU agent”, who told me I couldn’t take pictures because they were “professional” entertainers.  Say What?  He clarified things by saying “no flash”.  OK, I said, but I already took the shots I needed. 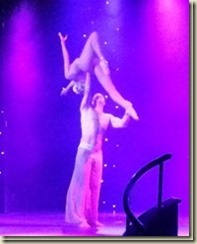 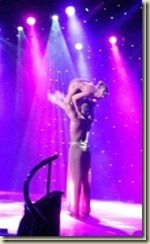 We spent some more time in the quiet Lido Café before going back to the room.