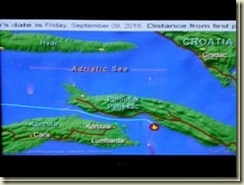 This is our second time here on the Croatian island of Korcula.  Korcula is about a mile from the Croatian mainland – actually the Peljesac Peninsula - and is known for wine production and the alleged birthplace of Marco Polo (yes, I thought he was Italian). 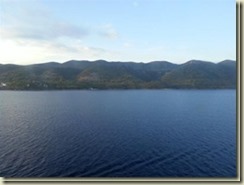 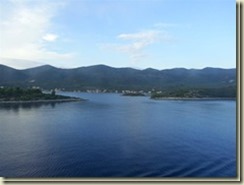 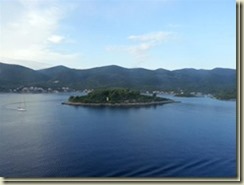 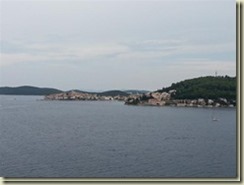 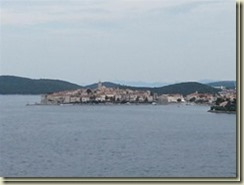 We both put in for tours today but only Ellen got one - “Charming Korcula” in the afternoon.  I had already done this exact tour last time we were here so I was not too disappointed.

I had another really nice breakfast up in the Lido Café – it was the same breakfast but I added a little “porridge” – aka oatmeal – to the layout.  The porridge was really good.  I brought Ellen her breakfast – fruit, lox, boiled egg, and tea (healthy to a fault).

Last night, there was a note on our door indicating that Paul O’Loughlin, the Entertainment Director/Manager, wanted to do a video interview with me in the Commodore Room (Deck 10) at 10:30 AM.  The video would show at 6 AM tomorrow and would coincide with the start of my presentation series.

The interview was quick and I am not really sure how it went but there was only take and that was it.  I never saw the video.

We had an early lunch/late breakfast up in the Lido then went to the Queen’s Room to get our tender tickets.  We got immediate boarding so that Ellen could make her tour on time.  The tender ride was smooth and short with nice views of the area around Korcula. 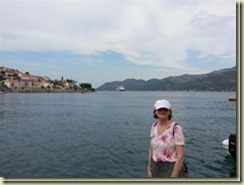 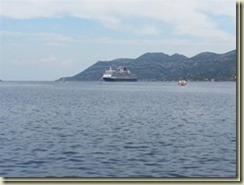 ET and QE in Korcula Bay 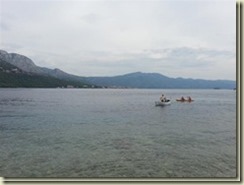 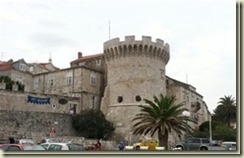 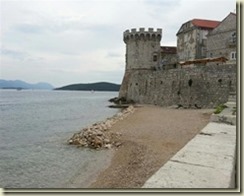 We spent a little time near the tender port and walked a bit around the little town.  There was not much to it but we did get in some steps since Ellen’s tour was delayed.  Ellen also thought it would be good to see how the waters of the Adriatic felt – in a word - “cold”. 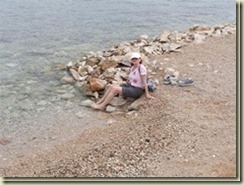 Toe Dipping in the Adriatic

I took the tender back and Ellen went on her tour – the cool thing was that we could text back and forth to keep track of what was going on.

I had lunch in the Golden Lion Pub, which serves a pub lunch every day.  With a lot of guests off on excursions, the pub was not crowded and I got a nice small table.  I had the Fish and Chips along with a pint (yes, a pint) of draft ale.  The meal was very good with the exception always of the mushy peas.  The blueberry cheese cake finished things off perfectly.

I spent most of the rest of the afternoon in the Garden Room on Deck 9.  This is a very comfortable room (if you don’t mind the constant televised soccer games in the background) adjacent to the Lido Café.  I asked one of the servers, Jalene, if she could make me my signature drink – iced decaf mocha latte with skim milk.  It came in a very large glass and it was perfect (another way of saying tons of calories).  In any event, the drink was the perfect companion for working out the kinks in my first talk for tomorrow. 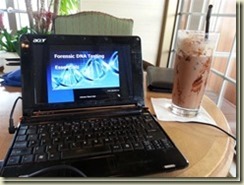 My Office and Drink

Ellen texted that she would be coming back later than scheduled. 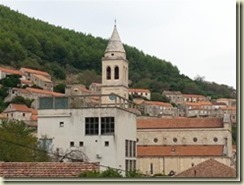 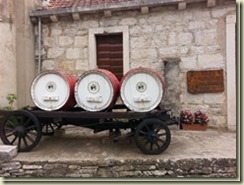 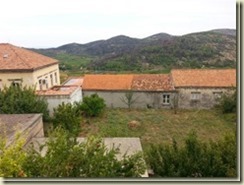 We met up in the room and got ready for dinner.  So far, every night has been “informal” – men are still required to wear jackets everywhere but the Lido Café.  The rest of my outfit consists of Docker-type slacks and a golf shirt.  So far, that combination has worked.

Dinner consisted of pasta prepared fresh – today, we shared pasta with smoked salmon and cream sauce.  A little watery but good.  I have also figured out what to do with the salads.  They are very good but the dressings are an enigma – Ranch isn’t  Ranch, Blue Cheese isn’t Blue Cheese (only Thousand Island is the real deal).  Adding balsamic vinegar to the other dressings turns them into tasty vinaigrettes.  There are a lot of other items on the salad bar that I like especially the sun-dried tomatoes so I am having salads noon and night.

We watched the sail away while eating dinner in the Lido Café. 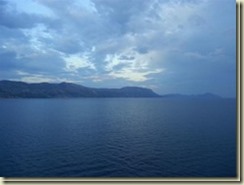 The Headliner tonight is Stephen Clark – Flute Player (we have seen him on previous cruises and did not go).  Instead, I am reading.  I finished “Crimson Shore”, the latest Pendergast Novel by Lincoln and Childs (Is Pendergast really dead?) and “Hidden” by Casey Hill (a “CSI Reilly Steel” novel – Abduction and Irish Mythology) and have started another Jack Reacher Novel - “Gone Tomorrow” (Suicide Bombers and Al-Qaeda).

We also discovered Adam Allinson – a terrific pianist in the Midships Bar.  Very pleasant music and venue.  His wife, Laura Szabo, is the harpist on board.  I had seen Adam working on his music in the Garden Room.

We decided to check out the Queen’s Room – lots of Gents and lots of dancing.  They looked like they were having fun. 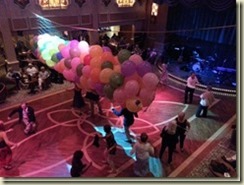 Returned to our room late – after the music stopped – seas are calm.