A beautiful and warm day in Gibraltar – last time we were here it was cold and windy. 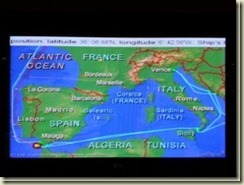 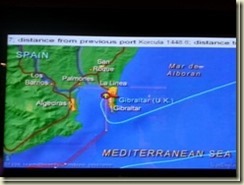 We are only in Gibraltar until 1:30 PM so all the tours are short and in the morning.  Ellen and I are both on the same tour - “Panoramic Gibraltar”- which runs about two hours and is almost entirely a bus ride followed by a stop at a fancy hotel for a snack and tea.

The groups were to meet on the pier at 12:30 PM and the walk to the meeting place was pretty short.

I wanted a shot of the Queen Elizabeth docked in Gibraltar – it wasn’t easy because of the fencing but I manage to get a decent shot of the ship. 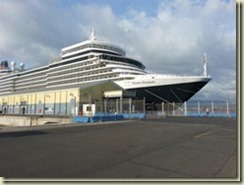 We were still early so we went back in the terminal to check out the shops and use the facilities.  There was an interesting poster in the terminal – in 2009, Miss World came from Gibraltar (I am assuming the Spanish influence based on her picture).  Couldn’t resist taking Ellen’s picture alongside Miss World – two Queens. 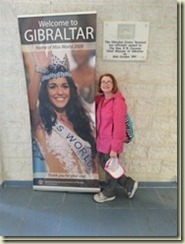 The tours are using mini-vans as transports and there are only 17 folks on my bus – I gave up my seat in the back and am sitting over the wheel well (but stretched out so comfortable).

Getting out of the city took us along “Main Street”, the shopping and happening area of Gibraltar.  There was indeed a high density of shopping establishments. 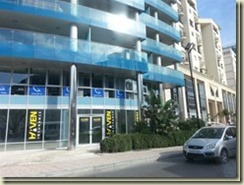 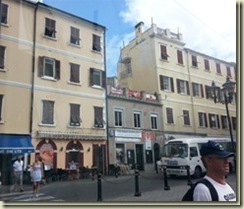 The tour left the city center and headed across the border with Spain.  The border is situated right on runway for Gibraltar Airport (a white knuckle airport due to winds).  People are allowed to walk across the runway to go between the countries. 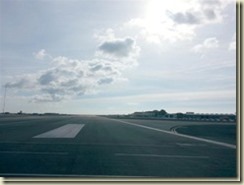 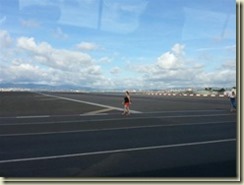 The stop at the airport runway, understandably, was brief and the next stop was the Southernmost point in Gibraltar, Europa Point.

From Europa Point, you can see both Spain and the busy port of Algeciras.  You can also see the mountainous coast of Africa.  In Mythology, the Straits of Gibraltar was known as the “Pillars of Hercules” and considered a danger to ships.  Ships venturing into the straits could be crushed when the Rock of Gibraltar and the Atlas Mountains came together like a huge vise.  We didn’t see much of that today. 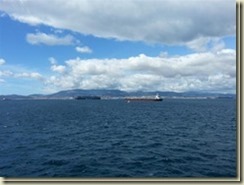 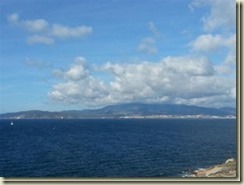 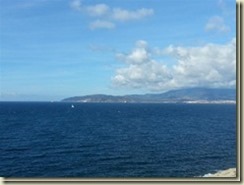 Two above – The Coast of Spain 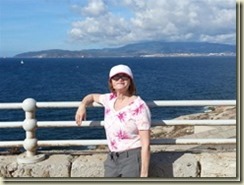 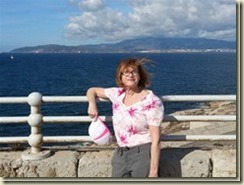 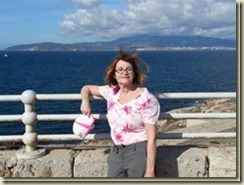 Ellen, Spain, and Wind in Your Hair, and Me 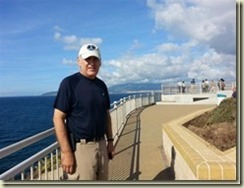 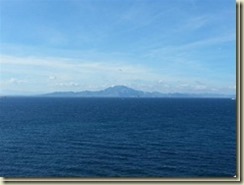 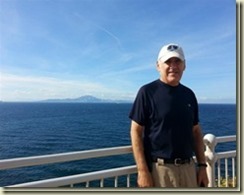 There are other sights at Europa Point.  Probably, the major one is the Europa Point Lighthouse.  The lighthouse, built in 1841, is 66 feet high and 161 feet above the surface of the water. 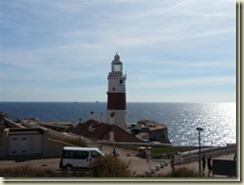 The other point of interest is the The Ibrahim-al-Ibrahim Mosque, also known as the King Fahd bin Abdulaziz al-Saud Mosque or the Mosque of the Custodian of the Two Holy Mosques.  This built-for- purpose mosque was funded (5 Million GBP) by King Fahd of Saudi Arabia for Gibraltar’s Muslim population.  Not the most accessible location but it probably serves the intended purpose. There is a play area near the mosque, which is probably part of the complex.  Completed in 1997, it is the Southernmost mosque in Continental Europe. 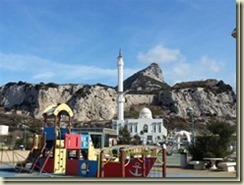 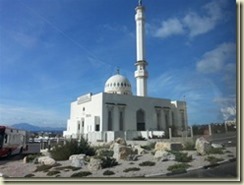 Mosque of the Custodian of the Two Holy Mosques

At this point, the tour circled the Rock giving us first a view of one of the beaches on Gibraltar, Catalan Bay (La Caleta or “Little Bay”).  Condos and hotels back up to the sand and surf.  Looks like a place that requires money. 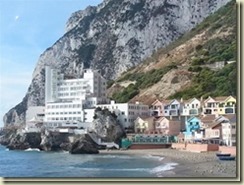 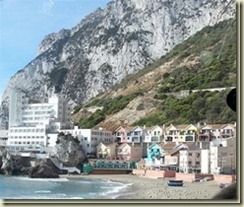 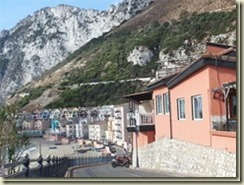 The Rock has an iconic side and a not so iconic side.  On our way back to the Hotel, we got a glimpse of the “Prudential Rock”. 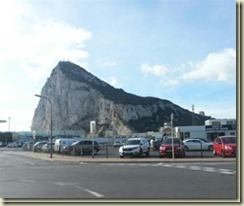 Solid as a Rock

Our next stop was a 45 minute visit to The Rock Hotel, a luxury hotel near the base of the Rock – the views were not that great so no pictures.  We spent much of the time in a large dining area feasting on scones, sweets, and tea (there were some meat items for everyone else).  I met up with Ellen during the snack and we walked around the hotel and terrace for a while.  I had to round up two strays before we could leave for the city center.

There were some sights along the way: 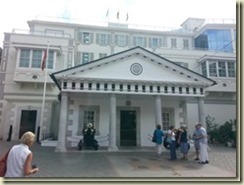 The driver (who was also the guide – scary) pointed out the only synagogue in Gibraltar – it was yellow, had a Mogen David, but I could not get a snap of it.  He also pointed out that this area was called Jewish Boulevard for obvious reasons.  I took a picture of the street but all I got was a photo of a herd of motor scooters (I guess Jewish people really like their scooters). 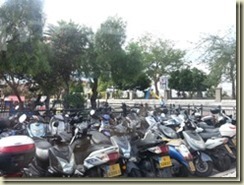 It was a very short but interesting excursion.  Because of the early departure, we were treated to a daylight sail away.  We stationed ourselves on the deck to view the sail away but the winds became so strong that we could not stay on deck and after taking a picture, we took shelter inside. 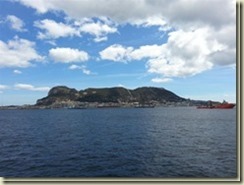 Gibraltar Sail Away (Non-Iconic Side of the Rock)

Showtime Headliners tonight are “The Blue Jays”, a 1950s rock and roll tribute band.  They were OK but I am not a big fan of that kind of music.  They did slick down their hair to be more period appropriate. 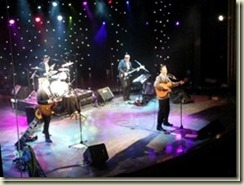 Following our routine, we got back to the room after midnight.  Seas have smoothed out.