Alexandria, founded by Alexander the Great in 332 BC, was the center of Greek learning and science.  Alexandria was home to the famed Library of Alexandria and the Pharos Lighthouse, one of the Wonders of the Ancient World.  Julius Caesar met Cleopatra in Alexandria.  Today it is a city of 6 million people. 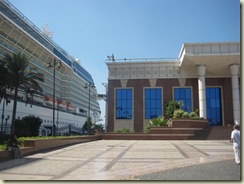 Our first day in Alexandria, Egypt and we have a tour scheduled for 11:45 AM today.  Before, that, I have a talk scheduled- “DNA Testing:  Secrets of the Royal Families” – in the Equinox Theater at 9:00 AM.  Clearly not the best time or venue on a late docking port day.  I showed up at the Theater at 8:30 AM.  Long story short, there were a total of 27 people at this talk (Dru was there and he said there were 40 – maybe in the balcony).  The talk for the few attendees went well.

Our excursion, “Landmarks of Alexandria”, will take us to several historical sites in the city as well as give us a bus level view of the city itself,  Our guide, Angy, said that she, like all tour guides, has a BA and MA in Egyptology; she is personable and easy to understand,  We are soon underway in our air-conditioned bus.

This city, twice as big Chicago, is a combination of buildings in disrepair and traffic.  There are no signal lights or lane markers – it is a Missouri Land Rush of traffic – find the open spot and drive into it.  You also find some very interesting alternative forms of transportation in this tangle of cars. 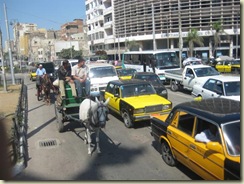 Getting around in Alexandria – on a donkey

We pass the statue of Mohammed Ali (Pasha) one of the important Muslim leaders of Alexandrian history. 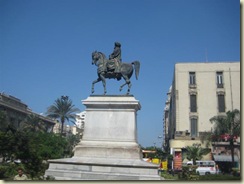 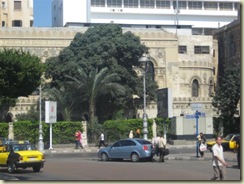 Another stop along the way is the Pillar of Pompey, which stands 84 ft high) (from 297 AD) and was dedicated to Emperor Diocletian 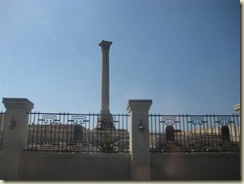 The Pillar of Pompey

We also pass the Roman Amphitheater (no pictures possible from the bus).

Our first stop is the Catacombs of Kom Ash-Shuqqafa (ca. 2nd Century AD), an underground (now but not then) burial complex in the heart of Alexandria.  It also contains the “Hill of Shards”, which consists of broken glasses purposely shattered by the bereaved after finishing a meal as part of the burial process.  Shattering the glass would ensure that death would not follow the mourners from the ceremony.  Cameras were not allowed in the Catacombs so there are no pictures.  It is hot and claustrophobic as we go down and then up the 92 stairs into the catacombs.  There are interesting artifacts on the walls depicting Egyptian mythology.  The trip is short and not that memorable.

The next stop is the Bibliotheque Alexandrina – the Library of Alexandria.  This library is not built on the site of the ancient library.  The new library is very impressive with several buildings making up the campus.  You need a ticket or day pass to use the library. 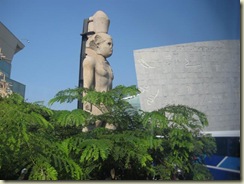 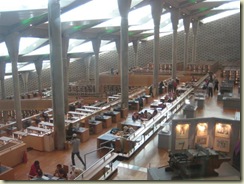 Once inside the library, we were joined by a Library Guide, who took us through a short tour of the facility. I made a tactical error and decided to get some internet time instead.  I did get set up on a computer but g-mail, yahoo mail, and hotmail were blocked.  I did manage to get around the system by going on Facebook and chat for a few minutes.  The next time I get to the Library, I need to spend the time checking out the antiquities section.

From the Library, the bus heads out along the Cornische (like Lakeshore Drive in Chicago).  This give us a view of the Four Seasons Hotel of Alexandria, the largest building in the Middle East (and perhaps the most expensive place to stay).  The hotel has a Starbucks Coffee Shop on the street level – the only one we have seen on our tour.  It’s appropriate since coffee at Starbucks runs about $10.00. 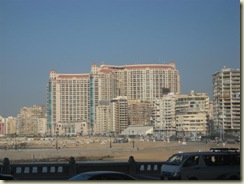 We next visit the two palaces (now hotels) at the Montaza Gardens.  The first palace – El Salamlek (“The Place for Accommodation for Men”) is the smaller of the two. 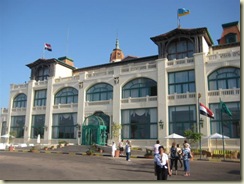 The other palace, located on the Mediterranean, is much larger and called Al Haramlek (“The Place for Accommodation for Women”).  This hotel, where Bill Clinton once stayed, was the Summer Palace of the last King of Egypt, King Farouk. 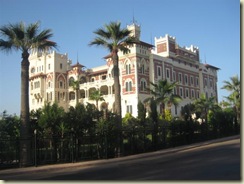 The Pharos Lighthouse at Alexandria was one of the Wonders of the Ancient World – towering some 400 feet over the Mediterranean.  It was destroyed by an earthquake.  The foundation of this structure was used to built a Citadel, Fort Qait Bey, which dates back to the 15th Century. 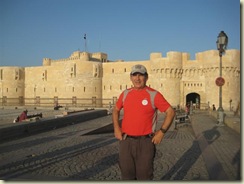 The next stop – a brief one – was at the Mosque of Abu Al-Abbas Al-Mursi.  It is the city’'s largest mosque.  According to our guide, while Egypt is almost entirely a Sunni Muslim country, this mosque is dedicated to a Shia cleric – considered even by the Sunnis of Egypt to be a holy man.

The sun was setting behind the Mosque lending this photo an eerie shadowiness. 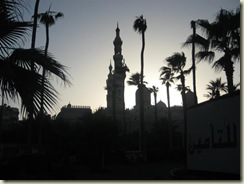 Our final “stop”is the Papyrus Institute.  Although it sounds like an academic institution, it is really a papyrus store.  We were given a demo of how papyrus paper is made but the rest of the time was spend shopping.  There are Papyrus Institutes all over Alexandria and Cairo and they are included in all of the excursions.  I found the demonstration interesting. 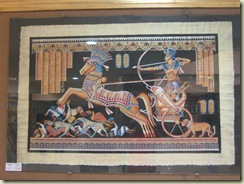 A papyrus hanging in the “Institute”

Once back to the ship, we had dinner and then took it easy for the rest of the evening.

We have a really long day tomorrow in Cairo so we are done for the day.