Another sleepless night – made worse by the time change.  Up at 6:30 AM and off to the Oceanview Cafe.  Unfortunately, the buffet doesn’t open until 7:00 AM but I have a little oatmeal and coffee.  The weather outside is nasty – lightning and thunder – and it is still dark.  In spite of this, the seas are smooth as we approach Piraeus, the port of Athens.

Piraeus is a pretty big city – pop 600,000- and Athens is a major metro area with 4.5 million people.  Athens is about 6 miles from Piraeus. 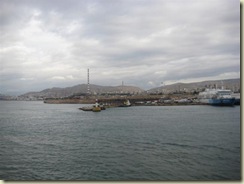 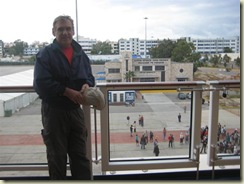 We are on tour today - “Ancient Corinth and Canal Cruise” with our Tour Guide – Yohrgus (I think – who looks like David Letterman’s lost Greek cousin).  The tour takes us through Piraeus and then along the highway to ancient Corinth near the entrance to the Peloponnesian peninsula.

The bus ride to Corinth is about an hour and half and most everyone on the bus is zonked and napping.  Ancient Corinth has it’s own Acropolis (complete with castle at the top) 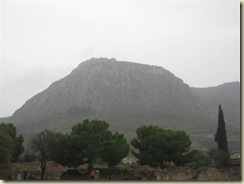 The ancient city is a mini-Ephesus complete with temples, agoras, and walkways.  The most impressive structure is the Temple of Apollo, built with solid columns (not column sections held together with metal pins). 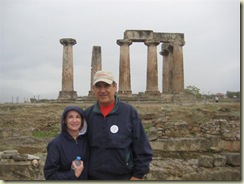 H and E and the Temple of Apollo

The city also has an impressive public meeting place – the Agora 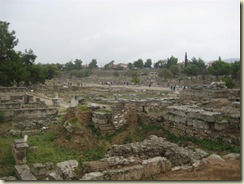 where the market used to be and people would gather for any and all occasions.  Another impressive building is the Fountain of Glauke. 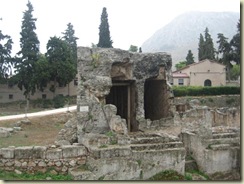 The Bema (Greeks for Steps) and origin of the Bema in Synagogues is also a well preserved structure in Corinth. 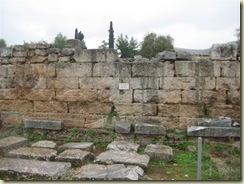 Even though the rain started falling a bit harder, we were still able to explore the entire site and get more terrific pictures including a great shot of the Temple of Apollo from the Agora.  Also present on the site were examples of Corinthian architecture (columns with leafy capitals) as well as statuary in pretty good shape. 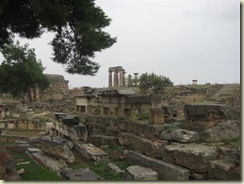 Temple of Apollo from Agora 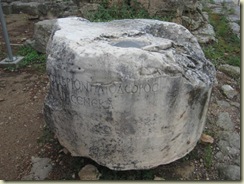 Remnant of a column with writing 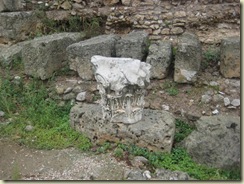 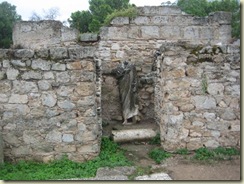 We spent a little time at the Corinth Museum (great collection of pottery, glass objects, and statues).

Our final stop was the Corinth Canal, which connects the Gulf of Corinth with the Ionian Sea.  This canal, which is about 6 miles long and about 50 feet wide, has transformed the Peloponnesian Peninsula into an artificial island.  The canal now allows boats to make the shortcut between the two bodies of water and avoids sailing all the way around the old peninsula saving time and money.

We board a boat on the Gulf side of the isthmus and we are on our way. 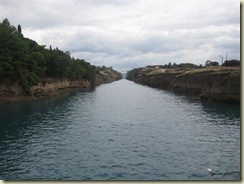 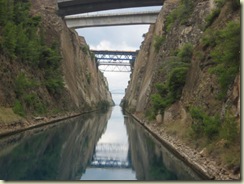 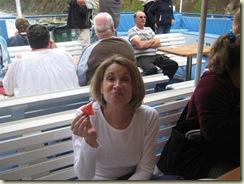 E trying food on the boat

We noticed unusual circular brown objects (about a foot in diameter)in the water.  I thought they were some kind of debris from the nearby trees but I now believe they were a type of jellyfish.  They were everywhere and were probably being chopped up by the ships propellers. 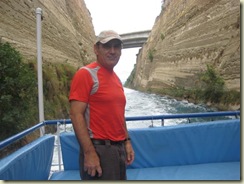 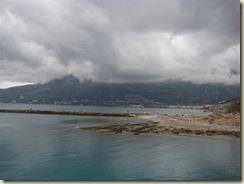 After entering the Ionian Sea, the boat turned around and went back to the starting point (where the bus was). 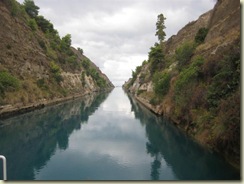 After dinner (which was good), we took in the show – Roman Danylo, a very funny comedian, who did some great improv stuff with audience members.

Sampled the various lounge acts before calling it a day.