The seas are a bit more choppy as I have breakfast in the Oceanview Cafe as the ship heads for Haifa, Israel. 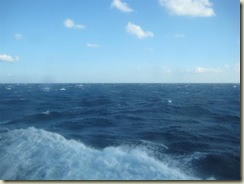 As the day went on, the seas smoothed out and the day turned out great. 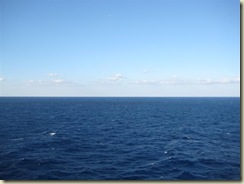 My second talk today - “Crime Scene Investigation in the UK” – is scheduled for the Equinox Theater at 11:45 AM.  This talk was specifically created for this voyage due to the anticipated high number of British on board.  While that does not seem to be the case (based on inquiries by myself and others at the various shows), the talk is still interesting in that it traces the early days of DNA Testing,

I attended the Destination Lecture on Israel which preceded my talk.  My talk went relatively well – attendance was about 150 – but I still have trouble connecting with audiences in that large a venue.  I also got some feedback that a lot of passengers thought that this talk was exclusively for the UK folks and didn’t attend.  I plan to change the title for the next cruise.

Tonight is the second Formal Night and we determined to get a photo of ourselves in our fancy duds.  The picture below was taken by our Macedonian waiter at the Silhouette Dining Room. 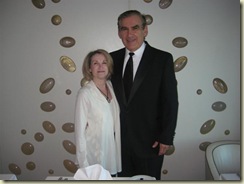 The Show tonight was great.  Israeli (now living in Florida) comedian – singer, Judy Kolba, was the headliner.  She was a hoot – a kind of Israeli Charo – told great jokes and did some serious singing including her finishing showstopper, “Let There Be Peace on Earth”.  She horsed around with Dru after the show – Dru came out in a skirt made of the same material as Judy’s “Carwash Dress” (it looks like a carwash brush when she swings back and forth). 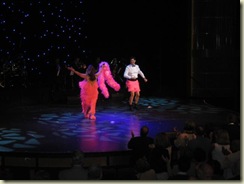 Judy Kolba and Dru ham it up

After the show, we took in some of the music in the Ensemble Lounge and Michael’s Club (still trying to bond with the music).  We did manage to get our obligatory mirror photograph. 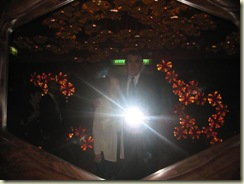 Still not caught up with sleep.