Bumpy night – 30 mph winds and rocky seas – but got a bit more sleep than previous nights.  Awakened by 7:15 AM wake up call.  Breakfast in the buffet – Ellen is at exercise class.  We are docked along with two other cruisers – Celebrity Century and HAL Prinsendam.

Kusadasi – population 50,000 – is generally a warm place but today it is cool and windy, but sunny; hope it warms up a bit today. 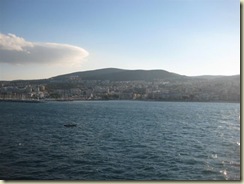 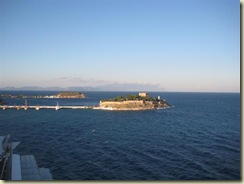 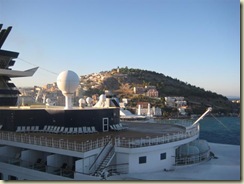 The Celebrity Century Deck and Ataturk Hill from the Equinox

We are not on tour today – we have seen Ephesus many times – so our plan is walk around town and end up with a nice Turkish Bath.  We did find a hotel with a spa that offered Turkish Baths (45 Euros).

Our walk through town took us to the small public beach, where I got a great shot of the Equinox at the pier. 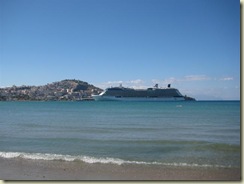 Lunch was back on the ship where I was able to get a shot of the beach where the photo of the Equinox was taken – a kind of mirror image of photographs. 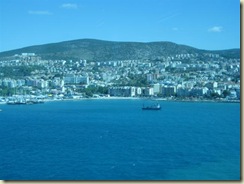 Earlier we had stopped in at the Starbucks near the pier to see if they had free WIFI.  They did so, after lunch, we returned, laptop in hand, to SKYPE with the kids back home.

The Showtime headliner tonight was violinist Greg Scott, who billed himself as the tallest violinist in the world (could be true since he is a tall 6-4).  He was very good.

Hope to get some sleep tonight.