A beautiful day in Haifa.  Although I didn’t get much sleep last night (I pulled a chest muscle coughing and that didn’t help), we responded to our 6:00 AM Wake Up Call, had a quick breakfast, and headed to the Equinox Theater to begin our Escort duties.

Haifa is the third largest city in Israel (population 240,000) and has the country’s largest deepwater port.  It is situated at the base and the slopes of Mt. Carmel.  Mt. Carmel has historical significance since it has the Cave of Elijah – the place where the prophet hid from nasty King Ahab and, even nastier, Queen Jezebel. 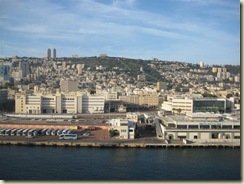 Haifa from the Equinox

Today, we are escorting the same tour - “Haifa and Acre” – but on different busses.  This gives us a chance to get together at various stops along the way.  Our tour guide is Sigal, a woman, who later told us that this was her first tour involving a group from a cruise ship.  We missed many of the advertised stops on this itinerary including the Cave of Elijah but we did get a taste of this city and will see it again when we return on the subsequent cruise.

Sigal has a heavy Israeli accent and was a bit difficult to understand at times (less for me that for the rest of the group on the bus).

We boarded our comfortable bus and we were underway.  Ellen took the kids along on this excursion. 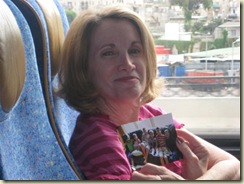 Some kind of Disney thing was going on because there were topiaries in the shape of Disney characters along the side of the road.  Goofy – I think  - is captured in the photo below. 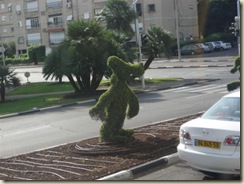 Our next stop is the Stella Maris Church, with its beautiful interior. 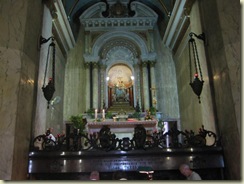 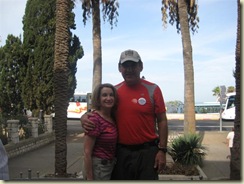 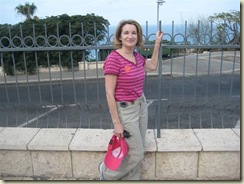 Us at the Stella Maris Church (top two photos)

At the bus proceeded on, we were able to get a nice view of the Mediterranean Sea as well as a train moving along the terrain. 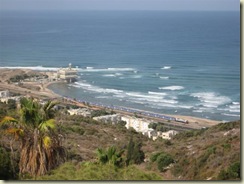 The bus made its way up Mt Carmel to the Baha’i Temple, a World Heritage Site.  The temple is being renovated so only the gardens were available for view and only from behind a gate.  Nevertheless, the location afforded a great view of the Hanging Gardens as well as the city of Haifa. 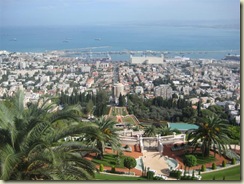 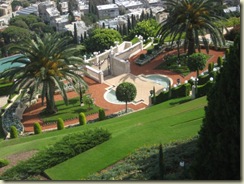 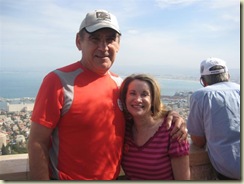 H and E at the Baha’i Temple

From this vantage point, we could also see the Celebrity Equinox docked in Haifa. 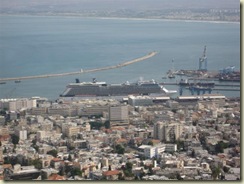 Our next stop is the city of Acre (Akko in Arabic) located on the other side of the Bay of Haifa.  The city has numerous structures from both the Crusader and Muslim periods.  Napoleon tried to conquer this city and was unsuccessful.  The Knights Hospitaliers, a Crusader group occupied Acre at one point. 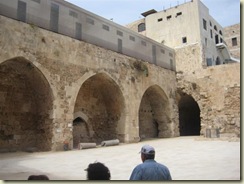 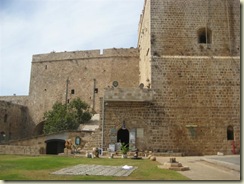 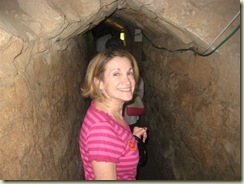 E at the entrance of one of the Acre tunnels 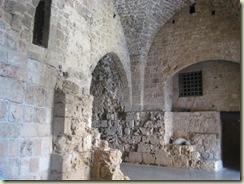 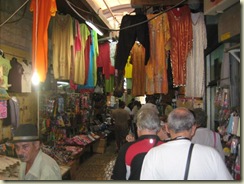 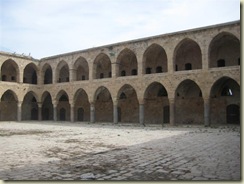 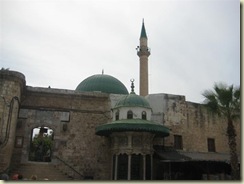 The Acre shoreline and harbor were very picturesque (see below).  Across from the harbor was a very interesting clock tower. 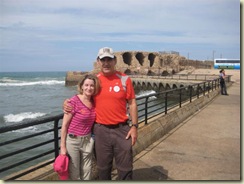 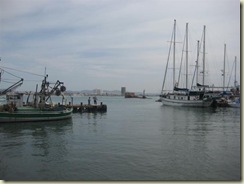 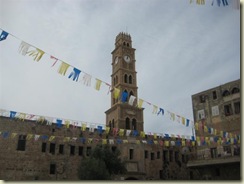 A number of passengers complained about the lack of Jewish sites on this and other Haifa tours.  To accommodate the passengers, Sigal checked with her tour company and arranged for a visit and tour of a nearby synagogue.  This synagogue, Sephardic and Tunisian, was quite close to Acre.

The Rabbi, a jovial man of 87, was more than happy to meet with so many people.  He explained a bit about the synagogue and also threw a lot of Acre based legend (“the flood waters stopped when they reach Acre”).  The synagogue walls and floors were all constructed of mosaic tiles (“millions of them”). 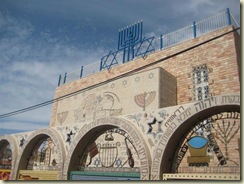 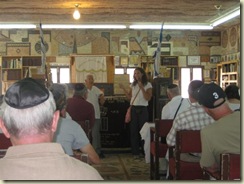 Sigal and the Rabbi answer questions 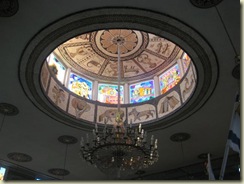 The ornate ceiling in the Synagogue 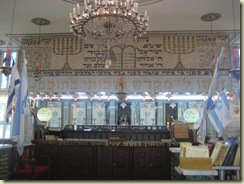 The Ark was opened to show the Torahs 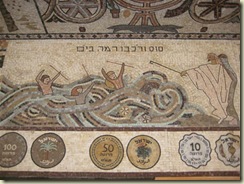 Mosaic – Moses at the Red Sea 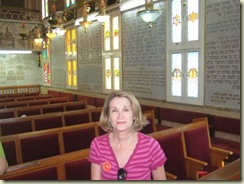 E at the Synagogue

The Synagogue completed the itinerary.  Soon, we were back at the ship in time for a late lunch.  After lunch, we headed to the port area to find an Internet Cafe.  At the port entrance, we were told that they only had Wi-Fi at a nearby coffee shop.  We went back to the ship for the laptop and headed to the coffee shop.  The place, Cafe Cafe, was only a few blocks away.  They did have free WIFI but I bought a very nice iced coffee ($5 US – they need a Starbucks here).  We were able to SKYPE with B and the kids; after that, Danny indicated he was on line so we asked him if he could set up SKYPE.  In a few minutes, we were SKYPING with him and the kids, as well.  Well worth the price of a cup of coffee.

Cafe Cafe was on the other side of this street (below) which leads all the way up to the Baha’i Temple.  We will try to walk this street when we visit Haifa on the second cruise. 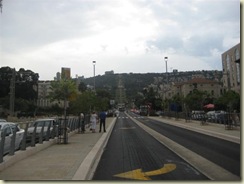 Quiet evening – resting up for a big day tomorrow in Jerusalem.