Up at 7:00 AM – breakfast is served only until 9:00 AM.  The usual and OK La Quinta breakfast.  The freshly made waffles always bring us back.  We are catching the 11 AM shuttle so now we are out on the back patio of the hotel (where the WIFI signal is the best) enjoying the warm temps under cloudy skies.

Our van departed on time at 11:00 AM for a short 10 minute ride to Port Everglades.  Since we didn’t have a room assignment, we were told by one of the port agents to just tag our bags with our names and they would get to the room.

After some quick talking, we were in the Preferred Line and checking in.  The rooms were ready so we checked our on inside passenger cabin – P540 – on the Plaza Deck.  It is a nice room with an interesting L shaped layout. 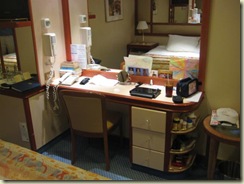 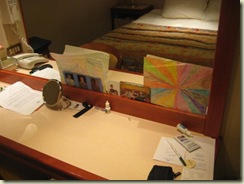 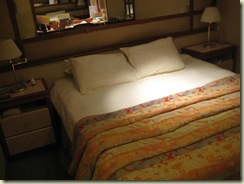 My computer barely fits in the room safe but that will work.  The beds will need to be pushed together but I think I can fit into the shower and that is a big plus – also, there is counter space in the bathroom for toiletries.  Once the beds got pushed together, there is still room to walk along side the beds (not always the case). 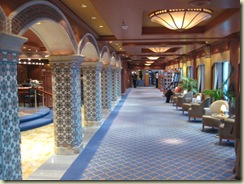 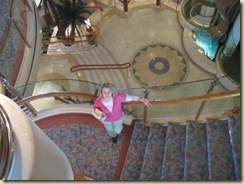 Ellen in the Atrium

It has a Solarium but it is not “Adults Only”; I doubt that too many kids will spend their time indoors in the solarium.  In fact, I haven’t seen any kids at all so far.

We had lunch at the Horizon Court Buffet on Deck 14.  Not very crowded and the food was pretty good – I especially liked the freshly made pizza I picked up from the nearby Princess Pizza parlor.  The ship has an ice cream parlor but only soft serve today – still very good.

Security around the harbor area was tighter than I had remembered it,  At one point, a police boat warned a private boat to leave the secure area around the Island Princess 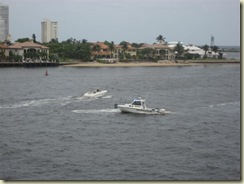 and watched him until he was well clear of the perimeter.  Serious security in Port Everglades (all for it).

The ship dropped lines at 5:00 PM and we were on our way.  Not the usual sunny sail away we had experienced each time earlier.  Also, for a change of pace, I shot the sail away from the starboard side of the ship. 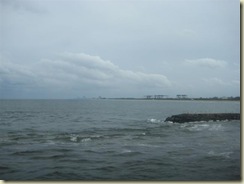 I was scheduled to meet with the Deputy Cruise Director, Danny Harvey, at 5:45 PM in the Explorer’s Lounge.  Instead, I met with Renee, one of his assistants who explained the process.  She did take us to the Cruise Staff offices, where I did meet Danny and Peter Tredgett, the Cruise Director, a very amiable Brit.  We had a nice chat about previous Princess cruises and how the lectures would proceed on this ship.

Ellen went ahead and got seats at the Bordeaux Room – the Anytime Dining Facility  - and managed to get window seats for two.  The food was very good (same menu as the Provencal Room – traditional dining) as was the service.

The Princess Theater is a large venue but it has no balcony and two aisles.  It is a bit like a standard theater – exiting the theater after the show does take some time.

Showtime tonight in the Princess Theater was the Welcome Aboard Show – performing were the Princess Singers and Dancers (they are very good) and a comedian – Scott Wyler - who had a low key, droll, type of delivery.  Not rib busting humor but funny, nevertheless.

Our search for after show entertainment took us to the Crooner Bar, where a singer-comedian, Tom Franek, was performing.  He uses kooky humor and a good voice to bring in the crowds.  This will be our lounge stop for the cruise – especially since he finished his set with “You Raise Me Up” and the “Prayer”.  What makes him even funnier is his heavy Minnesota accent and the crazy stuff he does during this numbers – like running around the Atrium while continuing to sing his number.  You have to see it to believe it.

The seas are smooth and we are tired…