The Island Princess quietly docked at our first port of call – Oranjestad, Aruba. 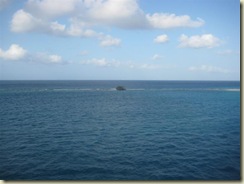 Oranjestad is our first port of call – also one of the shortest port stops – all aboard is at 12:30 PM.  No tours today due to the early starts of almost all the tours.  In fact, we got up about 7:45 AM, which is later than the tours start today.

After breakfast, we are off to explore Oranjestad with our planned destination being the Dunkin Donuts on the main drag. 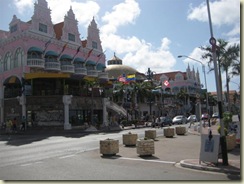 We were told that there is free WIFI there and we hope to catch up on e-mails and blogs.  The Dunkin’s turned out to be right there on the first street next to the pier.  We were able to log onto their WIFI (without the need to buy a donut) and e-mail the kids and check our accumulated e-mails.  I was also able to upload completed travel blogs for the cruise.  Most importantly, we caught the latest pictures of the kids including those of Ari’s birthday.

Since it is Sunday, most of the shops are closed.  However, we visited all of the standard shops in town (DI, Effys, Kay’s) to pick up our pirate booty.  I also found a nice cap for $5.00 (identical to my St. Kitts cap but a different color).

Although it was pretty hot, we did walk along the harbor, stopping at the beautiful Renaissance Hotel and Casino, with its own canal system (we actually saw a motorboat emerge from the hotel through this canal). 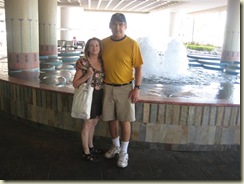 From the harbor, we could see the Island Princess docked 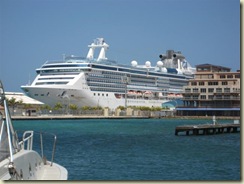 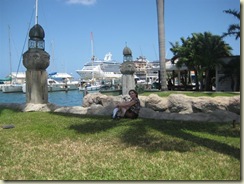 Too hot to really do much more walking so we headed back to Dunkin’s to see if we received any e-mail responses.  On the way, we passed an interesting restaurant, Paddocks, which featured a cow and a dinosaur on its roof. 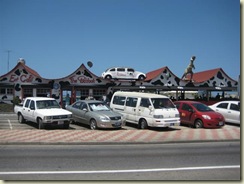 Unfortunately, the WIFI at Dunkin’s went down and we were unable to connect and get online.  Only one place left to go and that was back to the ship.

Sail Away was 1:00 PM but the ship left a few minutes early. 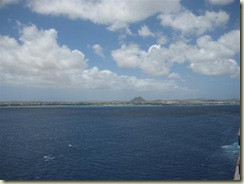 Spent the rest of the afternoon on the deck reading (I am reading a James Patterson mystery, “Third Degree”, – my first time reading one of his books).  Ellen and got the urge to walk the deck…we did one mile (2.8 laps) together and I proceeded to do four more laps alone for a total of 2.5 miles (the calorie burn might just cover the soft serve ice cream consumed earlier).

We had early dinner in the Horizon Court Buffet because we wanted to see Pat Milino perform in the Universe Lounge.  Dinner in the buffet turned out to be very good (Salmon Caesar Salad and Pizza) and relaxing – without the hustle and bustle of the Dining Room.

Pat Milano, who performs regularly in the Wheelhouse Bar is, by far, the best act we have seen in all our cruising.  Although he is young, he has all of the style and moves on stage and a great singing voice.  He interacts effectively with the audience and chit chats amusingly with his band.  He did mostly Broadway tunes – some obscure and some well known.  I have no idea why he is not in Las Vegas performing.  He was great.  He is on our schedule for the rest of the cruise.

At 8:00 PM, we caught Scott Wyler in the Princess Theater.  He did a totally different comic show – all his jokes are quick so there are 250 punch lines.  He was a hoot again.

At 9:00 PM, we were in the Crooner’s Lounge to hear Tom do his tribute to the Rat Pack.  Entertaining enough and kooky as usual.  I did request (he asked) for the Dean Martin hit, “Everybody Loves Somebody Sometime”, but he didn’t know it.  He promised to have it by the end of the cruise.  He is probably on the internet now getting the lyrics.

Tom didn’t take his usual break at the hour so we stayed and listened to a few more tunes.

The clocks go back an hour tonight (EST not EDT) so we have an extra hour to sleep (theoretically).

The seas are really calm…