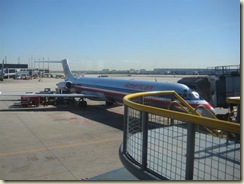 American Airlines has a new system instructing passengers to put their “conforming” wheelies on the 3-side of the aircraft (where they will actually fit).  This moved boarding along pretty well.  Departure was delayed while some mechanical work was done on one of the ailerons.  The delay was minimal and soon we were on our way.

That steep bank on takeoff never gets old. 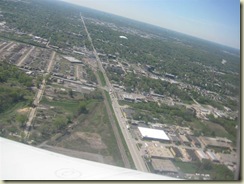 Climb out from Chicago

High pressure dominated most of the Midwest so our flight to Dallas- Fort Worth was smooth- a sky full of fluffy, fair weather clouds.  We only had an hour between flights but our connecting gate was only a few gates from our arrival gate.

Soon we were on another MD80 bound for Ft. Lauderdale.  The main problem on this flight was the carry on luggage – it took the assistance of all of the flight attendants to get everyone’s wheelies into the overheads (this crew did not implement the same plan for wheelies as our earlier crew).

As we climbed out, we had a great view of the Dallas Naval Air Station and Mountain Creek Lake.  Lots of airports in the Metroplex area. 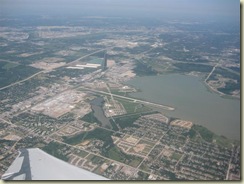 The flight to Ft. Lauderdale was smooth except for the portion where we crossed the Gulf of Mexico approaching the Florida Coast.  The air smoothed out as we approached FLL 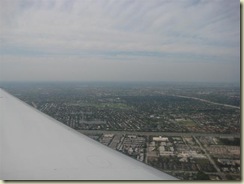 It looked hazy and warm down there and it was (76F).  Our bags appeared quickly – thank goodness - and we made a quick call to our La Quinta Hotel from the airport hotel phone.  The van picked us up in 15 minutes and soon we in our room, which turned out to be a suite.  We signed up for the 11:00 AM shuttle to the Port Everglades Cruiseport.

We spent most of the evening in our room resting for tomorrow.