Up at 7:10 AM and in the Horizon Cafe – many of the passengers are using the Cafe as an observation deck so seats are hard to come by.  Ellen’s exercise class apparently did not take place so the two of found a seat next to a very nice woman from Palos Verdes.

We are the Gatun Locks, the first of three sets of locks 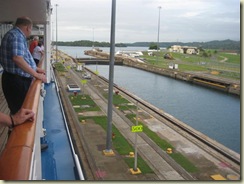 The locks are 110 ft wide and the Island Princess had a bow of 105 feet so we have about 2.5 ft of clearance from the walls.  The locomotives do not pull the ships through the locks – they are used to center the ships in the locks using a neat pulley and cable system. The dark blue (third left of the picture below) is the water between the ship and the wall. 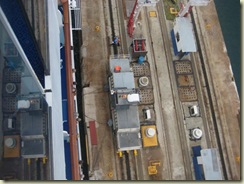 It will cost us $330,000 to transit the Canal – the cruise ship record is held by the NCL Pearl ($350,000).  By the way, the NCL transit was one we were cancelled from and wound up on the Pacific Princess instead.

We exited Gatun Locks at about 7:30 AM and are in a holding pattern in Gatun Lake, awaiting our turn to proceed. 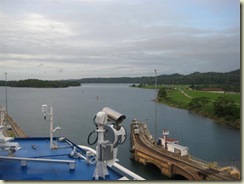 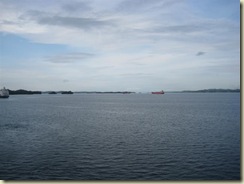 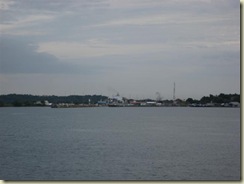 Gatun Lake is 85 feet above sea level – the Island Princess was raised to that level through the locks.

At 9:55 AM, the Island Princess is still stationary in Gatun Lake.  Ellen is needle pointing 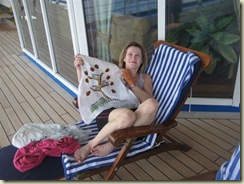 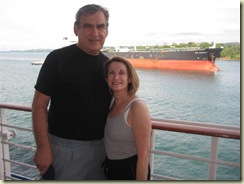 Gatun Lake in the background

It will take the Island Princess a few hours to transit Gatun Lake and arrive at the Pedro Miguel Locks.  The transit takes us past the giant crane, Titan, used by the Canal Authority 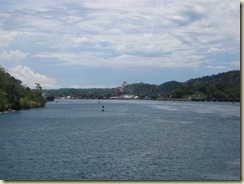 Prior to entering the Pedro Miguel Locks, the ship traverses the Culebra Cut, the narrowest section of the canal.  There seems to be plenty of room but the Island Princess (under the control of a Panama Canal Authority Pilot) stays between the red and green buoys. 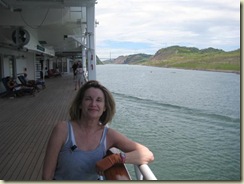 Just before arriving at the next set of locks, the ship passes the Continental Divide (present in the Rockies in North America) 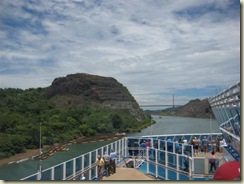 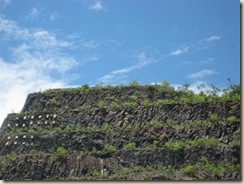 The Divide is called Gold Hill – to get investors for the canal project, a rumor was started that the hill contained gold.

Just past Gold Hill is the magnificent Centennial Bridge 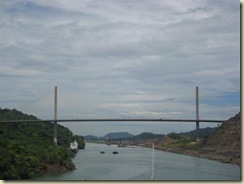 The bridge commemorates Panama’s Centennial.  The government was so eager to put up a monument to the centennial that they built the bridge before roads on each side were completed.  Truly, a “Bridge to Nowhere”.

the At about 1:30 PM, the ship entered the Pedro Miguel Locks. 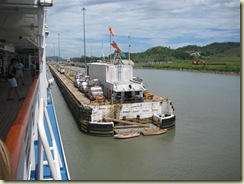 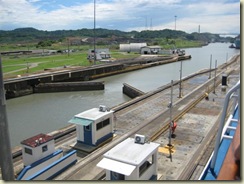 The ship will be lowered about 30 feet to the level of Mira Flores Lake.  You can feel the ship being lowered but two photo tell the story. 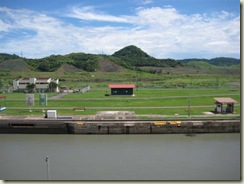 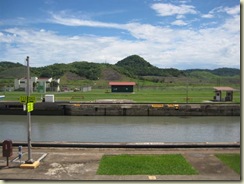 The grassy area in front was not visible from the photo location before the water was evacuated from the lock.

Once the lock doors were opened, the ship proceeded into Mira Flores Lake 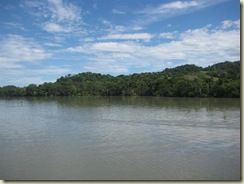 It is only about a mile between the Pedro Miguel Locks and the Mira Flores Locks.

The Mira Flores Locks consists of two stages, each involving a drop of about 30 feet.  This lowering will bring the ship to the level of the Pacific Ocean. 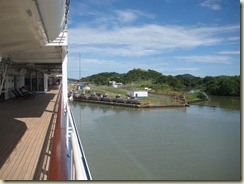 The lock doors abutting the Pacific Ocean are the heaviest (700 tons each) and the tallest (to deal with the large tidal levels of the Pacific) of all of the Canal Lock doors. 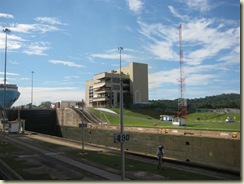 Once in the Pacific Ocean, the Bridge of the Americas comes into view. 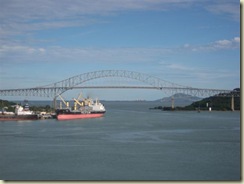 We are having dinner in the Bordeaux Room tonight because Red Snapper is on the menu.  The ship has already dropped anchor in the Pacific off shore from Puerto (Fuerte) Amador.  We can see the many ships anchored around us waiting for their turn to go through the canal.

After dinner, I catch up on the blog and look over my next talk.  At 7:30 PM, we make our way to the Universe Lounge for the big show of the night – comedian Fred Klett.  When we get there, the place is packed and we literally get the last two seats in the theater (all the way in the back).  Fred is very funny in a low key way – the audience didn’t laugh all that much and he worked it into his act.  We liked him.  One of his stories involved magician Garry Carson and an encounter with a moose in Alaska.

We checked with the Guest Services Desk and got our tour tickets for tomorrow.  We have to be in the theater at 7:25 AM so our evening is about over.

I set a wake up call for 5:45 AM – we are anchored so the sea is really calm.  Don’t expect to sleep much as is the case when I have to be up early on purpose.  We will see…