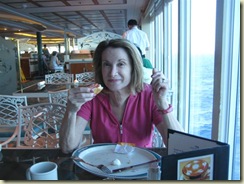 Larry’s talk today is on the Panama Canal.  The theater is full for this key presentation and Peter is there to introduce the talk.  I also got a plug from Peter for my afternoon talk.  The presentation is informative and interesting.  I leave a little early to get ready for my presentation.

“Forensic Science: The Science of CSI” is at 2 PM in the Princess Theater.  At least there are a handful of people present when I arrive.  By the time I get started, there are about 200 people in the audience. 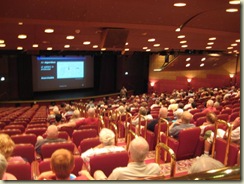 The Science of CSI (from back left of theater)

The audience is interactive and engaged – there are many events scheduled at this time so a few folks departed early.  A fair number of people stayed for a quick Q and A session – a good sign.  I also received some very positive verbal feedback from attendees.

A little R&R on the deck (very windy so not that comfortable) and then to the Horizon Court for a snack (to ruin our dinner) of guacamole and chips.  A good thing since there wasn’t too much on tonight’s menu for us.  I did try the lentil burgers with fried egg and cheese – hard to describe but not bad.

Tonight, we are going to the other show venue – Universe Lounge – to catch ventriloquist-comedian Dan Horn and his sidekick, Orson.  Dan has been around a long time since most of the people he appeared with on the visuals prior to the show were dead.  I am positive I have seen Dan a few times in the past but it had to be on TV.  In any event, the act was a hoot – Orson is almost real with his expressions and comments.  It was the same basic stuff but still very funny.

Tonight was “Music Trivia” with Tom in the Crooner’s Lounge.  Our team managed to get 15 of 16 right, missing only the theme from “Lord of the Rings”.  We lost a 6 way playoff for coveted Princess Medals but we will probably get another chance to win before the cruise is over.  The team play was fun.

Stayed after for a bit chatting with passengers (and lecture attendees) and then off to the room.