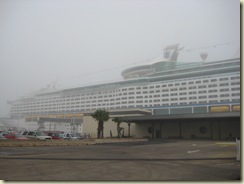 Voyager of the Seas – Docked

The Windjammer was packed – almost couldn’t get a seat.

Making sure we had everything, we made it to Deck 4 just about five minutes prior to walk off.  Walk off and immigration was very fast.  We spoke to an agent in the terminal area that told us we could purchase transfers to Bush IC Airport for $40 a person.  Soon we were on a bus waiting to go.  This waiting turned into about an hour (the bus needed to be full to go), so I found another agent and persuaded her to put us on a van so we could get moving.

This eventually happened and we arrived at the airport about two hours prior to flight.  There was a very long line for security but it moved and soon we were in the gate area.  Had some lunch; Internet was free for the holiday season so I checked e-mail.

Out plane was here 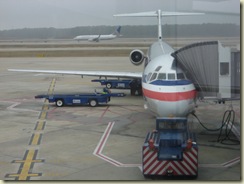 There was a long line for takeoff but soon we were in the air.  It took just a few minutes to clear the fog layer and soon there were blue skies and terrain 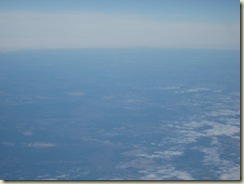 The flight was smooth and the pilot made up time en route.  The approach to Chicago was very interesting especially when the plane skimmed along the very low cloud layer covering the city.  It was like he was floating on the layer of clouds 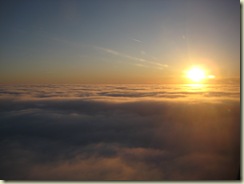 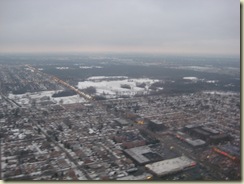 Pretty much a perfect cruise…