At about 7:00 AM this morning, the Voyager of the Seas docked at Nassau, Bahamas, successfully completing its Transatlantic Crossing.  The first land in about a week is Paradise Island, home to the Atlantis Hotel (building with the sky bridge) and Casino 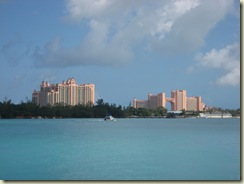 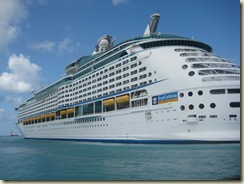 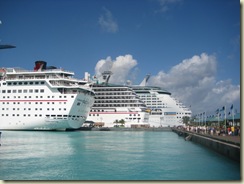 We are not touring today (mostly water sport options) but have planned a day of walking and shopping.  Another objective is to find the library to use their internet services.  The walk from ship to town is very easy but as soon as you hit the city you are in the Shopping/Touring Area (E Bay Street).  After walking a bit on Bay street, we came upon the historic Pompey Museum 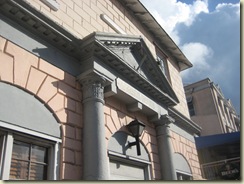 The Museum, a slave auction house from the 18th century, which commemorates Columbus’ 1942 visit to the Bahamas, was restored in 1992 by the Bacardi Rum Company.

From E Bay Street, we decided to walk south on Charlotte Street in an effort to get into the center of city. 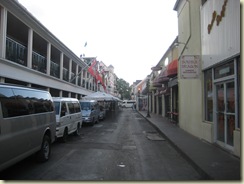 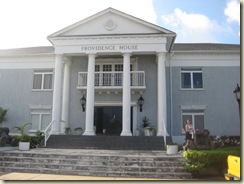 From Provident House, you can look back down to the pier and see just the top decks of the Voyager of the Seas 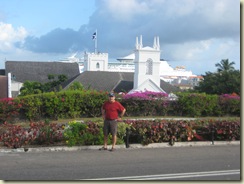 We walked down the hill at East Street to the Library.  The Library, a former jail (ca. 1797), is located in a square that also contains the Bahamian Supreme Court and other various courts in Nassau. 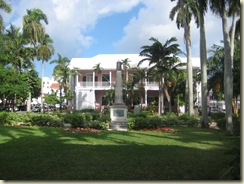 Internet access was not free at the Library ($5.00 / hour) and it was hot.  We had come to far so we waited in line until we could get a computer.  It took us only fifteen minutes to check our e-mail and send messages ($1.25).

Our quest for pins, hats, and tee shirts continued back on E Bay Street.  It was here that we spotted a most unusual site: A couple of actual Menorahs along the main street in town.  They were setting up for what is most likely a Christmas Parade and the menorahs were part of the decorations.  This is amazing since I could not find any synagogues in the phone book.

The heat and humidity shortened our walk (we still did over three miles) and we headed back to the ship for a late lunch.

Most of the afternoon was spent in the Solarium just taking it easy. 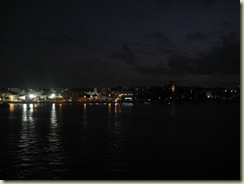 The Royal Caribbean Singers put on a Jazz Vocal show this evening.  Not a big fan on jazz but I did like some of the selections.

The rest of the evening was spent in the Promenade where I chatted with passengers until it was time to get to the room.