Early wake up call today so I can get to the La Scala Theater by 8:30 AM to set up for my first Lecture. I did get there on time to find the theater closed – I went up to the balcony level and was able to get in. Soon, two AV techs showed up and the laptop was ready to go. The images were on three screens including a 20 ft screen on stage. The images were a little blurry. I’m sure that they will work out the bugs for talk number 2.

The doors opened up about 8:40 AM and to my amazement, a whole bunch of people started pouring in. The final count was well over 250 people (perhaps 300 total). 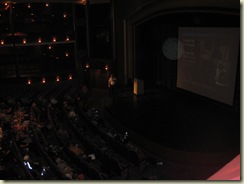 Talk #1 “The CSI Phenomenon” went very well – it turns out that maybe 90 percent of the audience were fans – of all three of the shows. And they were big fans of all of the forensic shows. Being familiar with the show made for an instant connection with the audience. Very interactive – good questions – and an indication that they would be back for some of the future talks.

I finished on time and turned the stage over to Walter Scott, NASA Engineer, who spoke about the Apollo program.

After lunch, we went to the “Drawing Class” taught by another enrichment couple. The topic was waves and it was fun.

Tonight is the first Formal Night. As we stroll to the Dining Room, we notice that there are a lot of passengers in formal wear. There are folks wearing medals on their formal jackets and even a few dress kilts in the crowd.

We look great in our formal dress 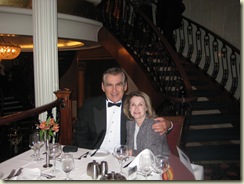 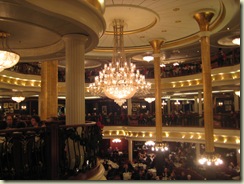 The show tonight is the first of two production shows by the Royal Caribbean Singers and Dancers - “Broadway – Rhythms and Rhymes” – a medley of songs (well known and obscure) from various Broadway Shows.

A few minutes with Ian West in the Schooner Bar and we are done for the night.