Cartagena, Spain is a very pretty port city on the Mediterranean Sea. It is also the Mediterranean Headquarters of the Spanish Navy (a long way from the feared Spanish Armada). The VOTS is docked and is the only ship here today. 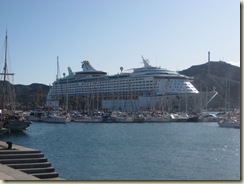 Looking at the harbor, it looks like it was a pretty tricky docking process. The population of this city is approximately 211,000.

We were not able to get an excursion today so , with the decent weather, we are just going to explore the city and maybe do some shopping.

The pier area looks like it has been updated recently with the area sporting apartments, restaurants, and a nice marina. 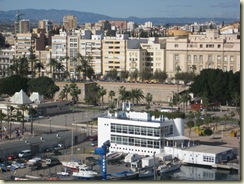 View of Cartagena from the ship 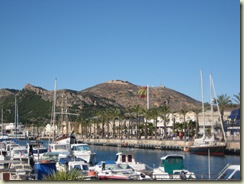 The marina and stores at the harbor

Another site visible from the ship but not as easily from the ground is the Concepcion Castle – the remains of a fortress that used to protect this city – it is now part of the Torres Park. You can pick it up in the center of the panoramic shot of the city 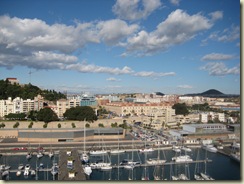 The city is only a few minutes away. There were a number of very interesting sites on our way to the actual city. The first was a tiny submarine named the “Isaac Peral”, which is now part of a fountain. 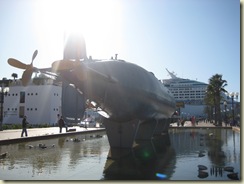 Peral Submarine (VOTS is in the background)

Based on the size of the sub, this ship would have to be manned by munchkins. Another thing, I could see any doors or portholes on the submarine – maybe they were removed when the sub was turned into a fountain.

There are several bronze statues at the entrance to Cartagena. One huge statue (reminded me of the Hulk) was one of a sitting man. The photo does not really reflect the size of this statue 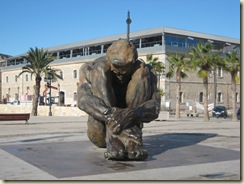 Several other statues seem to depict ordinary people doing ordinary things. We decided to pose with one of these metallic citizens. 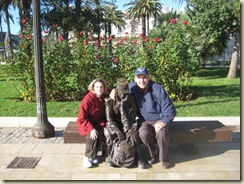 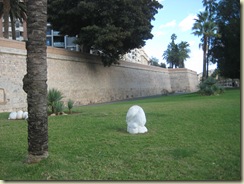 built by King Carlos III in the 1700s. Today, it also contains a sculpture park filled with familiar and esoteric objects. Near the Sea Wall is the Square of Heroes (a war monument even though Christopher Colom is also present on the obelisk) 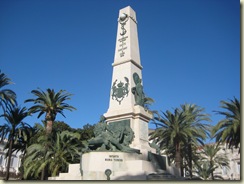 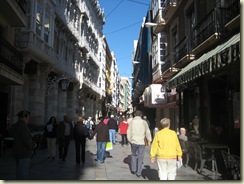 Right at the entrance to this street in the square is the Palacio Consistorial – the Old Town Hall. The building, originally dedicated in 1907, is now fully restored and houses a tourist information center in the lobby. 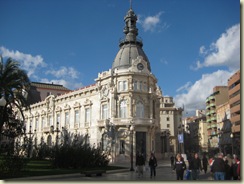 We walked about half of the total length of the city, looking for souvenirs and pins for the kids as sell as a post office to mail postcards. Then back to the ship for lunch.

After lunch, we were back in Cartagena still looking for a post office . Along the way, we came across an interesting archeological site 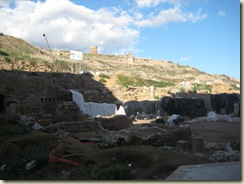 that had no signs or markings.

As it turned out, despite several directions from locals, the post office was never found. We met a group of local girls who volunteered to lead us back to the pier where a mail box was. A strange process, but we followed them (about 10 feet behind the four of them) right back to where we started and the post cards were sent on their way 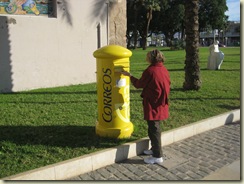 We checked in with the head waiter who, after some discussion, with several people, assigned to a table for four but blocked for two. The table had a great location, the middle level Dining Room (La Boheme) against the railing and not near the kitchen.

After dinner, we went to the Headliner show in the La Scala - “American Dream” a Tribute to Motown. The act, a kind of Gladys Knight and the Pips 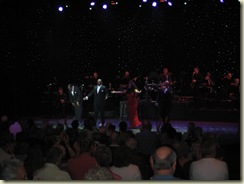 They were great…I could watch a lead singer and synchronized backup singers are night – it never grows old. They all had good voices and the crowd really liked them.

After the show, we listed to Ian West in the Schooner Bar for a few minutes – the smoke is a problem in that venue.

Smooth Seas – early wakeup call for me (6:15 AM) – My first lecture is tomorrow morning.