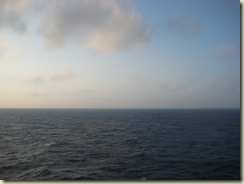 At Sea – Gulf of Mexico

At the show last night, the cruise director acknowledged the veterans in the audience – there were about a hundred vets.  I thought it might be nice to include something in my final talk about identifying soldiers lost in battle.  I picked the “Earthquake McGovern” case history.  I made the changes – I was a little apprehensive since this material had never been presented before.

I  went to the La Scala early to get some “quiet time”.  At 9:25 AM, there were already a few people in theater.  I thought it would be modest crowd – those who read their Compass carefully.  I asked the people if they were here for the lecture and they said they were.

The AV tech showed up at about 9:30 AM and we set up for the lecture.  He also gave me a DVD of the previous seven lectures – very nice.

As 10:00 AM approached, the people just kept coming in.  It was another full house.  I thanked them for reading their Daily Compass and explained to them that this process of giving your last talk and then returning for another talk was called “Favreing”

The talk went well – nice applause and two people standing.  I knew the crowd was paying attention because several people caught a typo in the “Earthquake” segment.

Another beautiful day at sea so we spent most of the time out on Deck 4.  We knew were in the Gulf – many oil rigs 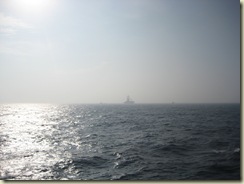 We had the final dinner of the cruise in the La Boheme Dining Room, where we had all of our dinners this cruise.  All of the meals were great.

Tonight was the Farewell Show – Besides a pretty funny,the Royal Caribbean Singers and Dancers made their final appearance 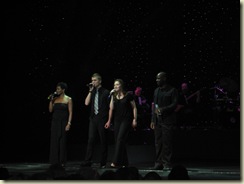 Back to the room to pack.  We do not have a transfer to the airport so we will have to wing it in the morning.