Embarkation Day – The plan is to grab a cab to the port around 10:30AM. Eventually, we decided to share a van with another couple, thereby saving half the costs. The ride to the Pier was very short – maybe 10 – 15 minutes. There are only two ships here today – the NCL Gem and the RCI Voyager of the Seas. 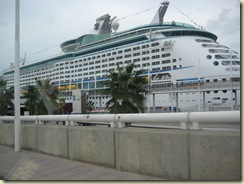 The Voyager of the Seas

(A note on the VOTS: On our Baltic Cruise in 2000, we saw the VOTS being built in a shipyard in Finland. The guide told us it would be the biggest cruise ship in the world. In 2009, she is only a mid-sized ship)

Check-in was quick and simple. We got on the ship at about 11:30 AM. First priority was to get a seat assignment in one of the three dining rooms. The Head Waiter confirmed we had no assignment and the best he could do would be a table for four – we would be first on the waiting list for a table for two.

Next stop: Windjammer Cafe for buffet lunch. Salad, soup, and pizza – still a welcome change from the faire we had all week at the hotel. The food was pretty good.

The rooms just opened up – we are in Cabin 9255 (mid ship). A nice room – both of us can be in the bathroom at the same time and it has a real shower.

Now we are up on Deck 14 waiting for the Muster Drill. Unfortunately, the weather does not look like it will be improving; the day started off cool and cloudy and at 3:00 PM there is still no sign of the sun. 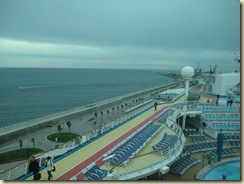 I received a letter in the stateroom from the Activities Director indicating we would be meeting to go over the lecture schedule for the cruise.

I am scheduled to conduct eight lectures – one on each sea day except for the last one. The talks are at 9:00 AM in the La Scalia Theater followed at 10:00 AM by a NASA engineer speaking on the Space Flight program. I will need to be aware of my speaking time so I don’t run into his time.

I didn’t change prior to going to La Boheme for dinner. We were joined by another couple from Atlanta. The conversation was pleasant but the dinner took a long time (most likely because passengers arrived late for the 5:30 PM first seating). The food was OK after some adjustment.

The “Welcome Aboard” Show was the only show of the night. The cruise director, Mike, was very funny. The dancers were great – there was a pretty amazing trapeze duo, and Steve Smith, a hilarious comedian. One of the better opening shows.

After the show, we searched for other entertainment around the ship. We found Ian Smith, a piano man, in the Schooner Bar, a Brit, with a funny sense of humor and a good voice. It looks like we have found our “Taylor” on this ship.

Seas are smooth – hope to get some sleep.